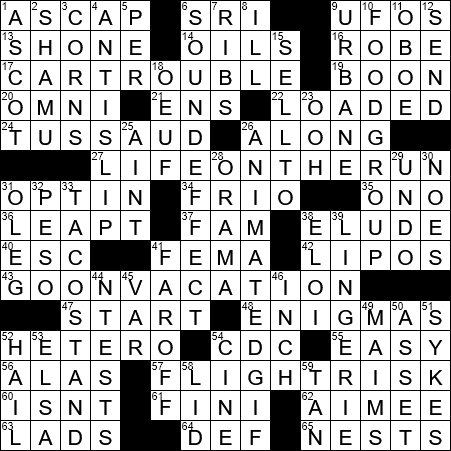 CROSSWORD CONSTRUCTOR: Jake Halperin
THEME: July
Each of today’s themed answers is a common phrase that is reinterpreted and clued as the travel edition of the a classic board game:

6. Honorific that becomes another honorific if you reverse its last two letters : SRI
“Sri” is a title of respect for a male in India.

The Roswell UFO Incident took place in 1947. Some people believe that an extraterrestrial spacecraft crashed, with aliens aboard. After the initial reports the public accepted the US Military’s explanation of the crash, that the debris recovered belonged to an experimental high-altitude surveillance balloon. The whole incident was dug up again over 30 years later when a claim was made that there was a cover-up in 1947, and that the armed forces had recovered an alien craft and brought it to Roswell Army Air Field. “The National Enquirer” ran the story, and it has been running ever since.

16. Attire for a Druid : ROBE
Druids were priests of Celtic Europe during the Iron Age.

17. Travel edition of a classic board game? : CAR TROUBLE (from the game “Trouble”)
The board game called Trouble was introduced in the US in 1965, and is very similar to the competing game called “Sorry!” that was already on the market. Both games are in turn based on the ancient game of Pachisi. The big selling feature of Trouble was the Pop-O-Matic dice container in the center of the board. I remember it well …

24. Wax sculptor Marie : TUSSAUD
Marie Tussaud was a wax sculptor from France. Some of her early work was very gruesome as she lived through the French Revolution. She would take the decapitated heads of executed citizens and use them to make death masks which were then paraded through the streets. She eventually moved to London, taking with her a vast collection of wax models made by her and her father. She opened a museum to display the works, and the Madame Tussaud’s wax museum is a major attraction in the city to this day.

27. Travel edition of a classic board game? : LIFE ON THE RUN (from the game “Life”)
The board game we call “The Game of Life” was created quite a few years ago, in 1869 by Milton Bradley. Back then it was called “The Checkered Game of Life” and was the first parlor game to become a popular hit. The modern version of the game was first released in 1960.

35. Peace activist Yoko : ONO
The artist Yoko Ono operates the website ImaginePeace.com. I checked it out once and found these lovely two quotes:

41. Part of the Dept. of Homeland Security : FEMA
Federal emergency management has been structured for over 200 years, but what we know today as the Federal Emergency Management Agency (FEMA) was created in 1979 in an Executive Order issued by President Jimmy Carter.

42. Some cosmetic surgeries, for short : LIPOS
Liposuction (lipo) dates back to the 1920s when it was developed by a surgeon in France. However, the procedure quickly lost favor when a French model developed gangrene after surgery. As a result it wasn’t until the mid-seventies that modern liposuction took off, after being popularized by two Italian-American surgeons in Rome.

52. Nongay, typically : HETERO
“Heterosexuality” is sexual attraction between persons of the opposite gender. The prefix “hetero-” comes from the Greek “heteros” meaning “different, other”.

54. Atlanta-based health org. : CDC
The Centers for Disease Control and Prevention (CDC) is based in Atlanta, Georgia. The CDC started out life during WWII as the Office of National Defense Malaria Control Activities. The CDC worries about much more than malaria these days …

57. Travel edition of a classic board game? : FLIGHT RISK (from the game “Risk”)
Risk is a fabulous board game, one first sold in France in 1957. Risk was invented by a very successful French director of short films called Albert Lamorisse. Lamorisse called his new game “La Conquête du Monde”, which translates into English as “The Conquest of the World”. A game of Risk is a must during the holidays in our house …

61. Done, in Verdun : FINI
Verdun-sur-Meuse is a city in northeastern France. The WWI Battle of Verdun took place just north of the city, and lasted for almost the whole of the year 1916. The battle was fought between the French and Germans, with loss of life being about equal between the two factions, the total death toll being about 700,000 men. The Battle of Verdun was primarily an artillery engagement, and some of those overlapping artillery craters are still visible today.

62. Singer Mann : AIMEE
Aimee Mann is a rock singer and guitarist from Virginia. Mann is married to Michael Penn, the brother of actor Sean Penn.

Down
1. Neckwear with dress whites : ASCOT
An Ascot tie is a horrible-looking (I think!), wide tie that narrows at the neck, which these days is only really worn at weddings. The tie takes its name from the Royal Ascot horse race at which punters still turn up in formal wear at Ascot Racecourse in England.

2. Very whale-known performer? : SHAMU
Shamu was the name of the third orca (aka “killer whale”) ever to be featured in a public exhibition. Shamu starred in a popular SeaWorld show in San Diego in the sixties. After she died in 1971, her name lived on as the name “Shamu” is still used by SeaWorld for its killer whale shows. That original Shamu was retired after she grabbed and refused to let go of the leg of one of her trainers.

9. Worldly : URBANE
We use “urbane” today to mean something courteous or refined. Back in the 1500s the term was used in the same way that we now use “urban”. Those townsfolk thought they were more sophisticated than the countryfolk, and so the usage evolved.

11. Instrument that an orchestra tunes to : OBOE
The oboe is perhaps my favorite of the reed instruments. The name “oboe” comes from the French “hautbois” which means “high wood”. When you hear an orchestra tuning before a performance you’ll note (pun intended!) that the oboe starts off the process by playing an “A”. The rest of the musicians in turn tune to that oboe’s “A”.

18. One of a dozen in un frigidaire : OEUF
In French, one might find an “oeuf” (egg) in “un frigidaire” (refrigerator).

26. Many an internet meme : ANIMATED GIF
A bitmap is an image file format used to store digital images. Basically, each pixel in a bitmap file is stored as a “bit” of information, hence the name “bitmap”. In 1987, CompuServe introduced a new type of image file called the Graphics Interchange Format (GIF). A GIF image takes the same information as a bitmap and then compresses it, resulting in a smaller file size. However, during compression the image may lose some resolution. The GIF format also handles short video clips, usually animations.

A “meme” (short for “mineme”) is a cultural practice or idea that is passed on verbally or by repetition from one person to another. The term lends itself very well to the online world where links, emails, files etc. are so easily propagated.

31. ___ Burov, K.G.B. officer on “The Americans” : OLEG
“The Americans” is a very engaging drama series set during the Cold War that features two KGB spies living as a married couple just outside Washington, D.C. The show was created by Joe Weisberg, who is a novelist and former CIA officer. The lead roles in “The Americans” are played by real-life couple Keri Russell and Matthew Rhys.

32. Mexican money : PESO
The coin called a “peso” is used in many Spanish-speaking countries around the world. The coin originated in Spain where the word “peso” means “weight”. The original peso was what we know in English as a “piece of eight”, a silver coin of a specific weight that had a nominal value of eight “reales”.

38. People in an H. G. Wells novella : ELOI
In the 1895 novel by H. G. Wells called “The Time Machine”, there are two races that the hero encounter in his travels into the future. The Eloi are the “beautiful people” who live on the planet’s surface. The Morlocks are a race of cannibals living underground who use the Eloi as food.

39. Boudoir wear : LINGERIE
“Lingerie” is a French term, but as used in France it just means any underwear, worn by either males or females. In English we use “lingerie” to describe alluring underclothing worn by women. The term “lingerie” comes into English via the French word “linge” meaning “washables”, and ultimately from the Latin “linum”, meaning “linen”. We tend not to pronounce the word correctly in English, either here in the US or across the other side of the Atlantic. The French pronunciation is more like “lan-zher-ee”, as opposed to “lon-zher-ay” (American) and “lon-zher-ee” (British).

51. Wanda of “Snatched” : SYKES
Wanda Sykes is a very successful American comedienne and comic actress. Interestingly, Sykes spent her first five years out of school working for the NSA. I saw her perform in Reno not that long ago, and she is very, very funny.

53. Mrs. Albert Einstein : ELSA
Albert Einstein’s first wife was a fellow student of his at the Zurich Polytechnic named Mileva Marić. The couple had a daughter together before they married in 1903, and then two sons. Albert and Mileva divorced in 1919. Albert was remarried that same year, to Elsa Löwenthal. Albert and Elsa had started a relationship in 1912, while he was still married to his first wife. Elsa had also been married before, divorcing Max Löwenthal in 1908. When Elsa took Albert’s name at the time of their marriage, she was regaining her old family name, as she was also an Einstein by birth. Albert and Elsa were first cousins.