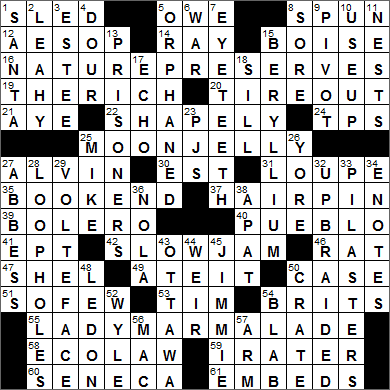 Today’s Wiki-est, Amazonian Googlies
Across
5. See red? : OWE
That would be red ink …

15. Place where you need an ID to get mail? : BOISE
The city of Boise is in Idaho, which has postal abbreviation “ID”.

19. Robin Hood’s target : THE RICH
Robin Hood is a figure from English folklore, celebrated in story and song. Some stories suggest that Robin Hood the outlaw was actually a real nobleman, the Earl of Huntington. Robin Hood’s famous companion was Maid Marian. Interestingly, the legend of Maid Marian (full name Lady Marian of Leaford) had been around for centuries before she became associated with Robin Hood starting in the 1700s.

21. Word that becomes its own synonym when its first letter is moved to the end : AYE
“Aye” and “yea” are synonyms, both meaning “yes”.

24. Pulls a certain prank on, informally : TPS
TP’ing (toilet papering) is a prank involving the covering of some object or location with rolls and rolls of toilet paper. If you live in Texas or Minnesota, that little “prank” is legal, but if you live here in California it is classed as mischief or vandalism.

25. Translucent sea creature that drifts with the current : MOON JELLY
The moon jelly (also “common jelly”) is a type of jellyfish found in almost all of the world’s oceans. It is prey to many different predators, including sunfish and sea turtles, as well as some seabirds.

27. Partner of Simon and Theodore, in cartoons : ALVIN
Alvin and the Chipmunks is a cartoon musical group that was created for the recording of a novelty song in 1958 called “The Chipmunk Song (Christmas Don’t Be Late)”. The three Chipmunks (Alvin, Simon and Theodore) were all voiced by singer Ross Bagdasarian, Sr. but with a speedy playback to create high-pitched voices.

30. “Dulce et Decorum ___” (Wilfred Owen poem) : EST
Wilfred Owen was an English soldier and noted poet, famous for writing realistic poetry about the tragedies of trench warfare during WWI. Owen was killed in action only one week before the war ended, so most of his work was published posthumously.

31. Jeweler’s tool : LOUPE
A loupe is a little magnifying lens that is held in the hand. “Loupe” is the French name for such a device.

39. Latin dance in 3/4 time : BOLERO
The word “bolero” is used to describe slow-tempo Latin music, and can be both a dance and a song.

40. Colorado county or its seat : PUEBLO
The city of Pueblo, Colorado is located just over 100 miles south of Denver. The city takes its name from a settlement established by fur trappers around 1842 that they called “El Pueblo” or “Fort Pueblo”. The original buildings were adobe structures, hence the “Pueblo” name.

41. Capable, jocularly : EPT
If one is capable, one might jokingly be described as “ept”, the apparent opposite of “inept”.

42. R&B/soul ballad : SLOW JAM
“Slow jam” is a term used to describe ballads in the rhythm & blues and soul genres. The term dates back to a song called “Slow Jam” that was released by the group Midnight Star in 1983.

47. Author Silverstein : SHEL
Author Shel Silverstein had a varied career and did a lot more than write books. Silverstein was a poet, composer, cartoonist and screenwriter among other things. One of his successful children’s books is “The Giving Tree”, which was first published in 1964. “The Giving Tree” tells of a young boy who has a special relationship with a tree in a forest. The message of the book seems to be that the tree provides the little boy with everything he needs.

51. “Thinking is the hardest work there is, which is probably the reason why ___ engage in it”: Henry Ford : SO FEW
The industrialist Henry Ford was born in Michigan, and was the son of an Irish immigrant from County Cork. Ford’s most famous vehicle was the one that revolutionized the industry: the Model T. Ford’s goal with the Model T was to build a car that was simple to drive and and easy and cheap to purchase and repair. The Model T cost $825 in 1908, which isn’t much over $20,000 in today’s money.

53. Miller who directed “Deadpool” : TIM
“Deadpool” is a 2016 superhero film, the eight of the “X-Men” series of movies. The title character is played by Ryan Reynolds.

54. Readers of the Daily Mirror or the Sun, mainly : BRITS
The British national newspaper called the “Daily Mirror” is a tabloid. The Daily Mirror was launched in 1903 initially as a newspaper aimed at women, run by women. The name “Mirror” was chosen by founder Alfred Harmsworth as he intended it to be “a mirror of feminine life”. The following year all the female journalists were fired, and it has been a pictorial/tabloid publication ever since. TV personality Piers Morgan was the editor of the “Daily Mirror” from 1995 until he was fired in 2004.

The tabloid newspaper “The Sun” has the largest circulation of any daily newspaper in Britain. “The Sun” was the paper that introduced the infamous “Page 3”, a page almost completely taken up with a photo of a topless model. The feature was finally pulled in 2015 after 40 years.

55. #1 hit of 1975 and 2001 : LADY MARMALADE
“Lady Marmalade” is a song that was most famously recorded by Labelle in 1975. A 2001 cover version by Christina Aguilera, Lil’ Kim, Mya and Pink was also very successful, released from the soundtrack of the film “Moulin Rouge!”. The song is noted for its suggestive chorus “Voulez-vous coucher avec moi ce soir?”, which translates from French as “Do you want to sleep with me tonight?”

58. Prohibition of strip mining, e.g. : ECO-LAW
Strip mining is a process used to mine minerals that are relatively close to the surface. A long strip of overlying soil and rock is first removed, and then the ore beneath is excavated. Once each long strip has been excavated then the overlying soil and rock is redeposited. Strip mining wouldn’t be most environmentally friendly practice …

60. Roman who originated the phrase “What fools these mortals be” : SENECA
Seneca the Younger was a tutor and advisor to the Emperor Nero of Ancient Rome. Although maybe innocent, Seneca was forced to commit suicide by Nero as it was alleged that Seneca participated in a plot to kill the emperor. To kill himself, Seneca cut into a number of veins in order to bleed to death.

Down
1. Noted gift giver : SANTA
Saint Nicholas of Myra is the inspiration for Santa Claus. Nicholas was the Bishop of Myra (now in modern-day Turkey) during the 4th century AD, and was known for being generous to the poor. Centuries after he died, his remains were desecrated by Italian sailors and moved to Bari in Italy. One legend has it that the relics were moved again centuries later and reburied in the grounds of Jerpoint Abbey in Co. Kilkenny in Ireland, where you can visit the grave today. I choose to believe that Santa Claus’s relics are indeed buried in Ireland …

2. Longtime Vermont senator : LEAHY
Patrick Leahy has served as a US Senator for Vermont since 1975. That makes him the only current member of the Senate to have served prior the election of President Jimmy Carter in 1976. Leahy is a big fan of the Grateful Dead. He presented Republican colleague Orrin Hatch with a tie designed by the Grateful Dead’s Jerry Garcia. Hatch responded by presenting Democrat Leahy with a Rush Limbaugh tie. A little “reaching across the aisle” …

5. Like Jane Eyre or Harry Potter : ORPHANED
“Jane Eyre” is a celebrated novel written by Charlotte Brontë, under the pen name Currer Bell. Over the years, I’ve shared here on my blogs that the “Jane Eyre” story line is a little too dark and Gothic for my taste, but a very persuasive blog reader convinced me to look more at the romantic side of the story and give it a second chance. I watched a wonderful 4-hour television adaptation of the novel made by the BBC a while back and I have to say that because I was focused on the relationship between Jane and Rochester, I was able to push past the Gothic influences (that depress me) so I really enjoyed the story. I thoroughly recommend the 2006 BBC adaptation to fans of the novel.

15. Fourth element on the periodic table : BERYLLIUM
Beryllium is a chemical element that occurs naturally only in combination with other elements, such as the mineral “beryl” composed of beryllium aluminium cyclosilicate. The blue variety of beryl is known as the gemstone aquamarine, and green beryl is emerald. Beryllium is the fourth element in the periodic table, with the atomic number of 4 and the symbol “Be”.

18. Place to set a candle, maybe : SILL
A “sill plate” or simply “sill” is an architectural term for a bottom horizontal member to which vertical members are attached. A “window sill” is specific sill plate that is found at the bottom of a window opening.

23. Something to go out in? : PJS
Our word “pajamas” (“PJs” for short) comes to us from the Indian subcontinent, where “pai jamahs” were loose fitting pants tied at the waist and worn at night by locals and ultimately by the Europeans living there. And “pajamas” is another of those words that I had to learn to spell differently when I came to America. In the British Isles the spelling is “pyjamas”.

29. Complete reversal : VOLTE-FACE
A “volte-face” is an about-face, a complete reversal of position. The term comes into English from French, but originate in Italian as “volta faccia” meaning “turn face”.

32. Took to task : UPBRAIDED
“To upbraid” is to reproach, find fault with, and is a term of Swedish origin.

33. Ornamental columns : PILASTERS
A pilaster is an architectural feature built into or applied to the face of a wall, designed to give the appearance of a supporting column.

36. The Big Easy : NOLA
The city of New Orleans, Louisiana has the nickname “The Big Easy”. This name might come from the early 1900s when musicians found it relatively “easy” to find work there. The city is also known by the acronym NOLA, standing for New Orleans, LA.

43. Ontario/Quebec border river : OTTAWA
The Ottawa River takes its name from the Odawa people, an Algonquin nation. The city of Ottawa changed its name to that of the river, from Bytown in 1855. The original townsite was called Bytown after Captain John By who completed the Rideau Canal that runs from Kingston on Lake Ontario to present-day Ottawa.

52. Noah of “Falling Skies” : WYLE
Noah Wyle is an actor noted for playing Dr. John Truman Carter III on television’s “ER”. He was highly valued by the show’s producers, earning about $400,000 per episode in 2005, a world record for an actor in a TV drama at that time.