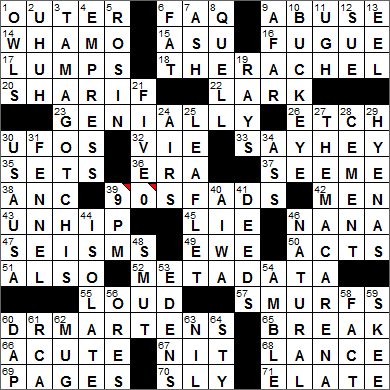 CROSSWORD SETTER: Damon J. Gulczynski
THEME: 90s Fads … each of today’s themed answers was a FAD during the 90s. Note that the numerals 9 and 0 are used in the squares marked with red triangles in my grid:

39A. What the answers to the four starred clues are : 90S FADS

Today’s Wiki-est, Amazonian Googlies
Across
6. Acronym on an online help page : FAQ
Well, I don’t think that “FAQ” is an acronym. I’d call it an initialism, or simply an abbreviation. But, maybe that’s just me …

Most websites have a page listing answers to Frequently Asked Questions (FAQ). There is a link to this blog’s FAQ page at the top-right of every page.

14. Toy company that gave us Frisbee and Slip ‘N Slide : WHAM-O
Wham-O was founded in 1948, with the company’s first product being the Wham-O slingshot. Since then, Wham-O has market a string of hit toys including the Hula Hoop, the Frisbee, the Slip ‘N Slide, Silly String, the Hacky Sack and the Boogie Board.

15. Sch. in Tempe : ASU
Arizona State University (ASU) has a long history, founded as the Tempe Normal School for the Arizona Territory in 1885. The athletic teams of ASU used to be known as the Normals, then the Bulldogs, and since 1946 they’ve been called the Sun Devils.

16. Type of composition that Bach is noted for : FUGUE
A fugue is similar to a round in that it is a piece written for two or more voices, with themes that are introduced and taken up by different voices at different pitches. The most famous composer of fugues has to be Bach.

18. *Hairstyle popularized by Jennifer Aniston’s character on “Friends” : THE RACHEL
Jennifer Aniston won a 2002 Emmy for playing Rachel on the great sitcom “Friends”. Jennifer’s parents are both actors, and her godfather is the actor Telly Savalas.

20. Omar who portrayed Dr. Zhivago : SHARIF
Omar Sharif was the great Hollywood actor from Egypt, an actor who played major roles in memorable movies such as “Doctor Zhivago” and “Lawrence of Arabia”. But to me he was my bridge hero (the card game). In his heyday Sharif was one of the best bridge players in the world.

“Doctor Zhivago” is an epic novel by Boris Pasternak, first published in 1957. I haven’t tried to read it the book, but the 1965 film version is a must-see, directed by David Lean and starring Omar Sharif in the title role. The story centers on Yuri Zhivago, a doctor and poet, and how he is affected by the Russian Revolution and the Russian Civil War.

30. Mysterious sightings that hover : UFOS
In 1952, the USAF revived its studies of reports of UFO sightings in a program called Project Blue Book. There were two prior USAF studies of the UFO phenomenon, namely Project Sign and Project Grudge. Project Blue Book ran from 1952 until it was shut down in 1969 with the conclusion that there was no threat to national security, and that there were no sightings that could not be explained within the bounds of modern scientific knowledge.

33. The ___ Kid (Willie Mays) : SAY HEY
Willie Mays’ nickname was the “Say Hey Kid”, although his friends and teammates were more likely to refer to him as “Buck”. When Mays was inducted into the Baseball Hall of Fame, he was asked who was the best player he’d ever seen in the game. He replied, “I don’t mean to be bashful, but I was.”

36. A low one is good in baseball, in brief : ERA
Earned run average (ERA)

52. Set of info about sets of info : METADATA
“Metadata” is usually defined as “data about data”. The classic example is the card catalog of a library. The catalog is a set of data about a collection of books. Each entry in the catalog is data about a specific publication.

57. Little blue cartoon characters whose adversary is named Gargamel : SMURFS
The Smurfs are little blue people created in 1958 by the Belgian cartoonist who went by the pen name Peyo. The Smurfs became famous in the US when Hanna-Barbera used them in a children’s cartoon series. The characters are largely a group of males. The original lineup included just one “Smurfette”, who is wooed by almost all of the boy Smurfs. Later, another female was introduced into the mix called Sassette, and still later along came Granny Smurf.

Gargamel is the evil wizard who is the sworn enemy of the Smurfs, the little blue people created by the Belgian cartoonist Peyo. Gargamel is on a quest to capture enough Smurfs so that he could use them as an ingredient in a potion that would turn base metal into gold.

60. *Boots brand big in grunge fashion : DR MARTENS
“Doc Martens” is the more familiar term for the British shoe brand “Dr. Martens”. The first Doc Martens were made in Germany just after WWII, by a doctor named Klaus Martens. He found his army-issue boots too uncomfortable for an injured foot, so he developed a boot with soft leather and an air-cushioned sole, the trademarks of today’s Doc Martens.

66. Sharper than 90° : ACUTE
In geometry, there are several classes of angles:

68. Jouster’s weapon : LANCE
Tilting is the most recognized form of jousting. Jousting can involve the use of a number of different weapons, but when lances are used the competition is called “tilting”. Jousting took place in a roped-off enclosure that was called the lists, or list field. In later medieval times, some castles and palaces had purpose-built “tiltyards” that were used for jousting. Do you remember where the Beach Volleyball events were held in the 2012 London Olympics? Well that was Horse Guards Parade, the former tiltyard for the Palace of Whitehall that was used in the time of King Henry VIII.

69. “War and Peace” famously has more than 1,200 : PAGES
I have to confess that I have tried to read Leo Tolstoy’s “War and Peace” twice in my life, and failed both times (it is l-o-n-g). Even though the 1956 movie adaptation runs for 3½ hours, it’s still the easy way out! The film version stars Audrey Hepburn as Natasha Rostova and Henry Fonda as Count Pierre Bezukhov.

Down
3. *Hand-held “pets” with digital faces : TAMAGOTCHIS
Tamagotchis are hand-held digital pets from Japan. They come housed in tiny egg-shaped computers, usually with a three-button interface. The Tamagotchis can be named, get hungry, and can be happy or sad. Care is provided by the own using the interface buttons. The name “Tamagotchi” comes from the Japanese word “tamago” meaning “egg”, melded with the English word “watch”.

5. Bagful on a pitcher’s mound : ROSIN
Rosin is a solid form of resin derived from plant sources. Rosin is formed into cakes that players of stringed instruments use to rub along the hairs of their bows to help improve sound quality. The rosin increases the degree of friction between the strings and the bow. That same friction-increasing property comes into play when baseball pitchers use rosin to get a better grip on the ball.

7. Baseball bat wood : ASH
Most wooden baseball bats are made out of ash. Bats are also made of maple, although maple bats are falling out of favor due to a tendency for them to shatter.

10. Ohio State student : BUCKEYE
Ohio State University (OSU) was founded back in 1870 as the Ohio Agricultural and Mechanical College. The athletic teams of OSU are called the Buckeyes, named after the state tree of Ohio. In turn the buckeye tree gets its name from the appearance of its fruit, a dark nut with a light patch thought to resemble a “buck’s eye”.

21. TV’s “Hawaii ___” : FIVE-0
“Five-O” has become urban slang for a police officer, or the police force in general. The term of course is rooted in the 1970s TV Show “Hawaii Five-O”. Hawaii Five-O was a totally fictional police force created for the television show. The name recognizes that Hawaii was the 50th state to join the union. Steve McGarrett in the original show was played by Jack Lord, and “Danno” Williams was played by James MacArthur.

29. “Laughing” animals : HYENAS
The spotted hyena of Sub-Saharan Africa is also known as the laughing hyena because of the sound it oftens makes, which resembles maniacal laughter.

31. Herb sometimes called “sweet anise” : FENNEL
Fennel is a hardy perennial plant species in the celery family that is used as a herb. It also goes by the name “sweet anise”. Personally, I can’t stand fennel …

41. Monopoly cards : DEEDS
The commercial game of Monopoly is supposedly a remake of “The Landlord’s Game” created in 1903 by a Quaker woman called Lizzie Phillips. Phillips used her game as a tool to explain the single tax theory of American economist Henry George. The Landlord’s Game was first produced commercially in 1924. The incredibly successful derivative game called Monopoly was introduced in 1933 by Charles Darrow, who became a very rich man when Parker Brothers bought the rights to the game just two years later in 1935.

44. Quarantine : ISOLATE
The original use of our word “quarantine” back in the 1500s was as a legal term. A quarantine was the 40 days in which a widow had the legal right to reside in her dead husband’s house.

48. Obscene material : SMUT
“Smut” means “dirt, smudge” and more recently “pornographic material”. The term comes from the Yiddish “schmutz”, which is a slang word used in English for dirt, as in “dirt on one’s face”.

53. Perfect places : EDENS
According to the Book of Genesis, Adam and Eve lived in a garden “in” Eden, with Eden being geographically located by reference to four rivers including the Tigris and the Euphrates. Some scholars hypothesize that Eden was located in Mesopotamia, which encompasses much of modern-day Iraq.

54. Mosey along : AMBLE
“Mosey” is American slang for “amble”, of unknown origin.

56. Metals from lodes : ORES
A lode is a metal ore deposit that’s found between two layers of rock or in a fissure. The “mother lode” is the principal deposit in a mine, usually of gold or silver. “Mother lode” is probably a translation of “veta madre”, an expression used in mining in Mexico.

59. ___-Ball (arcade game) : SKEE
Skee Ball is that arcade game where you roll balls up a ramp trying to “bounce” it into rings for varying numbers of points. The game was first introduced in Philadelphia, in 1909.

60. Fist bump : DAP
The dap is a form of handshake, nowadays often a complicated and showy routine of fist-bumps, slaps and shakes. Some say that “dap” is an acronym standing for “Dignity And Pride”.

62. Make a face for the camera : MUG
The verb “to mug” means to make an exaggerated facial expression. The term comes from mugs used to drink beer (called Toby mugs) that are the made in the shape of heads with grotesque expressions. “Mug” can also be a noun meaning “face”.