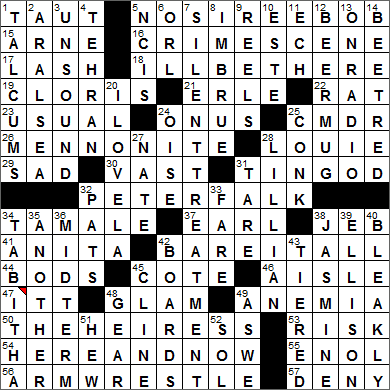 Today’s Wiki-est, Amazonian Googlies
Across
15. Former education secretary Duncan : ARNE
Long before Arne Duncan became Secretary of Education he was a professional basketball player, but not in the NBA. Duncan played for the National Basketball League of Australia, for the Eastside Spectres in Melbourne.

19. She played Phyllis on TV’s “Phyllis” : CLORIS
The actress Cloris Leachman has won more primetime Emmy Awards than any other person, mainly for her portrayal of Phyllis Lindstrom on “The Mary Tyler Moore Show”. Leachman also won a Best Supporting Actress Oscar for her performance in the 1971 movie “The Last Picture Show”. Back in 1946, she competed in the Miss America pageant as Miss Chicago.

25. Spock, e.g.: Abbr. : CMDR
Leonard Nimoy played the logical Mr. Spock in the original “Star Trek” television series. Spock has to be the most popular character on the show, and he keeps popping up in “Star Trek” spin offs to this day. Nimoy first worked alongside William Shatner (Captain Kirk) in an episode of “The Man from U.N.C.L.E.” (I loved that show!), with Nimoy playing a bad guy and Shatner playing an U.N.C.L.E. recruit.

26. One speaking the language Plautdietsch : MENNONITE
The Mennonites are a group of religious sects that originated in the Friesland region of the Low Countries. The various denominations are named for Menno Simons who was a contemporary of the Protestant Reformers who followed Martin Luther.

28. Dictatorial dispatcher on “Taxi” : LOUIE
Danny DeVito’s big break as an actor came with the role of Louie De Palma on the sitcom “Taxi”. After parlaying his success on television into some major comic roles on the big screen, DeVito turned to producing. He co-founded the production company Jersey Films which made hit movies such as “Pulp Fiction” and “Garden State”. DeVito has been married to actress Rhea Perlman for over 30 years, recently reconciling with her after an announcement that they planned to divorce.

31. Dictatorial type : TIN GOD
A “tin god” is a person who claims authority and is full of self-importance. The use of “tin” is apt as it is a base metal with relatively little value.

32. “Murder, Inc.” Oscar nominee : PETER FALK
Peter Falk was an actor from New York City who became most associated with the title role in the cop show “Columbo”. Off the screen, Falk was an accomplished artist, and studied art for many years.

“Murder, Inc.” is a 1960 gangster movie inspired by the real-life Brooklyn gang from the thirties known as Murder, Inc.

34. Husky food? : TAMALE
A tamale is a traditional dish from Central America composed of a starchy dough that is steamed or boiled in a wrapper made from a corn husk or banana leaf. The dough is called masa, and can include many different ingredients including meat, cheese fruit and vegetables.

37. Overseas court figure : EARL
In the ranking of nobles, an earl comes above a viscount and below a marquess. The rank of earl is used in the British peerage system and is equivalent to the rank of count in other countries. Other British ranks have female forms (e.g. marquess and marchioness, viscount and viscountess), but there isn’t a female word for the rank of earl. A female given the same rank as an earl is known as a countess.

38. Bush native to the South : JEB
Jeb Bush is the son of President George H. W. Bush, and the brother of President George W. Bush. I always thought that Jeb was an American nickname for James or Joseph but I must be wrong, because George and Barbara’s son John Ellis Bush is called “Jeb”. A kind blog reader has suggested the the name “Jeb” may have been chosen as JEB are the initials of John Ellis Bush.

45. Animal shelter : COTE
The Old English word “cote” was used for a small house. Our modern word “cottage” comes from “cote”. We now use “cote” to mean a small shelter on a farm for sheep or birds.

46. Party divider : AISLE
That would be the aisle between two political parties sitting in session.

47. “Engineered for life” corp. : ITT
International Telephone & Telegraph (ITT) was formed in 1920 from the Puerto Rico Telephone Company. ITT divested its telecommunications business in 1986, today the company is known for its products in the field of water and fluids management, as well motion and flow control. Many of ITT’s products are sold into the aerospace market.

49. Lack of punch : ANEMIA
The term “anemia” (or “anaemia” as we write it back in Ireland) comes from a Greek word meaning “lack of blood”. Anemia is a lack of iron in the blood, or a low red blood cell count. Tiredness is a symptom of the condition.

50. Olivia de Havilland’s Best Actress film, 1949 : THE HEIRESS
“The Heiress” is a 1949 film starring Olivia de Havilland in the title role, as well as Montgomery Clift and Sir Ralph Richardson. The film is an adaptation of a 1947 play of the same name by Ruth and Augustus Goetz. In turn, the play is based on an 1880 novel by Henry James called “Washington Square”. The Henry James novel was also adapted into 1997 film called “Washington Square” that has an excellent cast, including Jennifer Jason Leigh, Albert Finney, Ben Chaplin and Maggie Smith. I am going to have to rent that one …

Olivia de Havilland is an English actress, born in Tokyo, who came to live in California with her family in 1919. Her younger sister is actress Joan Fontaine. De Havilland won two Best Actress Oscars, for “To Each His Own” (1946) and “The Heiress” (1940). Fontaine won a Best Actress Oscar for “Suspicion” (1941). As a result, sisters Olivia and Joan are the only two siblings to have won lead acting Academy Awards.

57. Gainsay : DENY
“To gainsay” is to deny or contradict, basically to “say again”.

Down
1. Choices in the baby department : TALCUMS
Talc is a mineral, actually hydrated magnesium silicate. Talcum powder is composed of loose talc, although these days “baby powder” is also made from cornstarch.

2. Body undergoing desertification : ARAL SEA
The Aral Sea is a great example of how man can have a devastating effect on his environment. In the early sixties the Aral Sea covered 68,000 square miles of Central Asia. Soviet Union irrigation projects drained the lake to such an extent that today the total area is less than 7,000 square miles, with 90% of the lake now completely dry. Sad …

4. Capital in 1979-80 headlines : TEHRAN
Tehran is the capital of Iran and is the largest city in the Middle East, with a population of about 8.5 million. Iran has been around an awful long time and Tehran is actually the country’s 31st national capital.

5. Lead-in to “Los Angeles” or “New Orleans” : NCIS
NCIS is the Naval Criminal Investigative Service, which investigates crimes in the U.S. Navy and Marine Corps. The service gives its name to the CBS TV show “NCIS”, a spin-off drama from “JAG” in which the main “NCIS” characters were first introduced. The big star in “NCIS” is the actor Mark Harmon. “NCIS” is now a franchise, with spinoff shows “NCIS: Los Angeles” and “NCIS: New Orleans”.

6. Magic, on a sports ticker : ORL
The Orlando Magic were formed in 1989 as an NBA expansion team. A local paper was asked to run a competition to suggest names for the new team and the community came up with its four top picks of “Heat”, “Tropics”, “Juice” and “Magic”. A committee then opted for “Orlando Magic”. A good choice I think …

8. Stain : IMBRUE
To imbrue something is to stain it, especially with blood.

Granada is a city and province in Andalusia in the south of Spain. Granada should not to be confused with Grenada (note the different spelling), the island nation in the Caribbean that was invaded by the US in 1983.

11. Level in an org. : ECH
We use the word “echelon” (ech.) to describe a rank or level, particularly in the military. The term comes from French, in which language it has the same meaning, although the original meaning in Old French is “rung of a ladder”.

20. Song played at Staples Center after every Lakers victory : I LOVE LA
“I Love L.A.” is a song written and recorded by Randy Newman in 1983. The song is played at major sporting events in the city, after the home team scores or wins.

24. Department in Picardy : OISE
The department in northern France known as Oise is named for the River Oise. The river rises in Belgium and joins up with the River Seine just outside Paris.

27. “Great” sleuth of kid-lit : NATE
The “Nate the Great” series of children’s novels was written (mainly) by Marjorie Sharmat. Nate is like a young Sherlock Holmes, with a dog for a sidekick called Sludge. Some of the books have been adapted for television.

28. Jimmy Carter’s mother : LILLIAN
Lillian Carter was the very visible mother of President Jimmy Carter. Ms. Carter was a noted social activist both in this country and abroad. At the age of 68 years, in 1966, she joined the Peace Corps and worked for 21 months in India caring for people sick with leprosy. Ms. Carter was quite a character, noted for her snappy comments. When her son, then Governor Carter of Georgia, told her he was going to run for president, she shot back, “President of what?”

31. Weight allowance : TARE
“Tare” is the weight of a container that is deducted from the gross weight to determine the net weight, the weight of the container’s contents.

34. “Bewitched” witch : TABITHA
On the hit sitcom “Bewitched”, Samantha and Darrin’s daughter is Tabitha. Tabitha has supernatural powers just like her mother. The daughter also got her own spinoff show called “Tabitha”.

39. 20th-century novelist who shared first and middle names with poet Emerson : ELLISON
The author Ralph Ellison’s most famous book is “Invisible Man”, which won the National Book Award in 1953. Ellison’s full name is Ralph Waldo Ellison, and he was named for Ralph Waldo Emerson.

45. “Leavin’ on Your Mind” singer, 1963 : CLINE
Patsy Cline was a country music singer who managed to cross over into the world of pop music where she enjoyed great success. Cline is one of a long list of musical legends who died in plane crashes. Cline was 30 years old when she was killed in 1963 in a Piper Comanche plane piloted by her manager, Randy Hughes. Hughes and Cline decided to make that last flight despite warnings of inclement weather, and it was a severe storm that brought down the plane in a forest outside Camden, Tennessee.