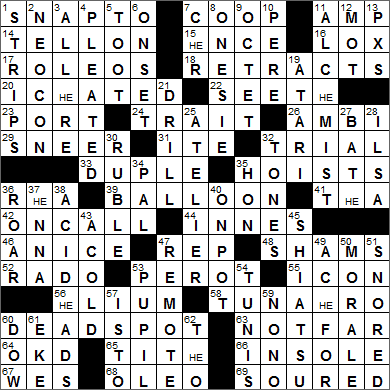 CROSSWORD SETTER: Elizabeth C. Gorski
THEME: Helium Balloon …. we have a rebus puzzle today, with the letters “He” in eight squares. “He” is the element symbol for HELIUM, and if we joint the rebus squares we end up with a HELIUM BALLOON. The print version of the puzzle even has a string hanging out of the bottom of the balloon:

39A. Party staple suggested by connecting this puzzle’s special squares : BALLOON
56A. 39-Across filler : HELIUM

Today’s Wiki-est, Amazonian Googlies
Across
7. Fowl territory? : COOP
An Old English word for basket (“cypa”) started to be used in the 14th century as the word “coop”, meaning a small cage for poultry, a word we still use today.

11. Speaker’s position? : AMP
An electric guitar, for example, needs an amplifier (amp) to take the weak signal created by the vibration of the strings and turn it into a signal powerful enough for a loudspeaker.

16. Bagel shop order : LOX
Lox is a cured salmon fillet, finely sliced. The term “lox” comes into English via Yiddish, and derives from the German word for salmon, namely “Lachs”.

17. Lumberjack contests : ROLEOS
Roleo is the name given to a log-rolling competition traditionally engaged in by lumberjacks

23. Dessert wine : PORT
The city of Oporto in Portugal gave its name to port wine in the late 1600s, as it was the seaport through which most of the region’s fortified red wine was exported.

26. Both, for openers : AMBI-
The prefix “ambi-” that we use to mean “both” is a Latin word that actually means “around” or “round about”. “Ambivalence” was originally just a psychological term, describing “serious conflicting feelings”. Later it came to mean uncertainty about which course to follow.

41. Mother of Eos and Selene : THEA
In Greek mythology, Theia (also “Thea”) is a goddess of the moon. Theia’s brother and consort is Hyperion, the god of the sun. Theia and Hyperion are the parents of Helios (the Sun), Selene (the Moon) and Eos (the Dawn).

44. Actress Laura of “ER” : INNES
Laura Innes is actress who is best known for playing Dr. Kerry Weaver on the long-running TV show “ER”. She also played the lead role of Sophia in the short-running TV drama “The Event” in 2010-2011.

48. Pillowcases : SHAMS
A “sham” is something that is imitation, fake. In the world of bed linens a sham is also imitation and fake, in the sense that it is a decorative cover designed to cover up a regular pillow used for sleeping.

52. High-end Swiss watch : RADO
Rado is a famous manufacturer of watches, noted for pioneering the use of scratch-proof materials. Rado make a watch that the Guinness Book of Records calls “the hardest watch on Earth”.

53. Candidate of 1992 and 1996 : PEROT
Ross Perot graduated from the US Naval Academy in 1953, as president of his class. Perot served his 4-year commitment but then resigned his commission, apparently having become somewhat disillusioned with the navy. He was ranked number 101 on the Forbes 400 List of Richest Americans in 2012, and at that time was worth about $3.5 billion. Back in 1992, Perot ran as an independent candidate for US president. He founded the Reform Party in 1995, and ran as the Reform Party candidate for president in 1996.

56. 39-Across filler : HELIUM
(39A. Party staple suggested by connecting this puzzle’s special squares : BALLOON)
The element helium (He) has an atomic number (at. no.) of 2.

58. Fishy deli order : TUNA HERO
“Hero” is another name for a submarine sandwich. The hero originated in New York City in the 1800s among Italian immigrants who wanted an Italian sandwich that reminded them of home. The name “hero” was coined in the 1930s, supposedly by a food critic in the “New York Herald Tribune” when he wrote that “one had to be a hero” to finish the gigantic sandwich. Hero is a prevalent term to this day in New York City, reserved for a submarine sandwich with an Italian flavor.

60. Where service is lacking : DEAD SPOT
That would be cell service, mobile phone service.

65. Church offering : TITHE
Traditionally, a “tithe” is a payment of one tenth of a person’s annual income and is usually given to a church. Tithing is a practice taught in many traditions, and according to a 2002 survey, about 3% of American adults donate 10% or more of their income to a church.

67. Wide receiver Welker : WES
Wes Welker is a wide receiver who made his NFL debut with the San Diego Chargers in 2004. Welker has built a successful career in football for himself, despite joining the NFL as an undrafted free agent. Notably, he owns a reasonably successful racehorse called “Undrafted”.

68. Yellow stick : OLEO
Emperor Louis Napoleon III of France announced a competition to develop a substitute for butter, a substitute that would be more accessible to the lower classes and more practical for the armed forces. In 1869, a French chemist called Hippolyte Mege-Mouries came up with something that he called oleomargarine, which was eventually manufactured under the trade name “margarine”. The name “oleomargarine” also gives us our generic term “oleo”.

Down
1. Prepares to streak : STRIPS
People have been running around naked for an awfully long time, but the application of the word “streaking” to the phenomenon only dates back to 1973. A journalist was reporting on a mass nude run of 533 people at the University of Maryland in 1973, and used the words “they are streaking (i.e. moving quickly) past me right now. It’s an incredible sight!”. The Associated Press picked up the story the next day, and interpreting “streaking” as the term to describe “running naked”, and we’ve been using it that way ever since.

2. Former liberal, informally : NEOCON
By definition, a neoconservative (neocon) is a former left-aligned politician who has moved to the right and supports the use of American power and military to bring democracy, liberty, equality and human rights to other countries.

7. “Burlesque” co-star, 2010 : CHER
“Burlesque” is a 2010 musical film starring Cher and Christina Aguilera. Aguilera plays a singer who finds work in a Neo-Burlesque club in Los Angeles, where she meets a former dancer who becomes her mentor (played by Cher).

10. Van Gogh’s “Portrait of ___ Tanguy” : PERE
“Portrait of Père Tanguy” is an 1887 painting by Vincent van Gogh. The subject was someone who sold art supplies and was an art dealer, someone who offered some of van Gogh’s works for sale.

12. Monsieur Marceau spoke the only one in all of Mel Brooks’s “Silent Movie” : MOT
“Mot” is the French word for “word”.

Marcel Marceau was the most famous mime of all time, a native of Strasbourg in France. Marceau made a cameo appearance in Mel Brooks’s “Silent Movie”, playing himself. In the scene, Mel Brooks is asking Marceau to appear in his movie (a question asked silently of course, in subtitles), and Marceau turns to the camera and speaks the only word in the whole film, “Non!” (French for “No!”). The mime speaks! Brilliant …

19. Big name in games : ATARI
At one point, the electronics and video game manufacturer Atari was the fastest growing company in US history. However, Atari never really recovered from the video game industry crash of 1983.

25. Drawing room? : ATELIER
An atelier is an artist’s studio, with “atelier” being the French word for “studio” or “workshop”.

28. Ingrid’s “Casablanca” role : ILSA
Ilsa Lund was played by Ingrid Bergman in the 1942 movie “Casablanca”. I love the words of one critic describing the chemistry between Bogart and Bergman in this film: “she paints his face with her eyes”. Wow …

30. Souvenir of a Russian trip : RUBLE
The ruble (also “rouble”) is the unit of currency in Russia, as well as several other countries of the former Soviet Union. One ruble is divided into one hundred kopecks (also “kopeks”).

36. Simba’s warning : ROAR
Among the group of lions at the center of “The Lion King” story, young Simba is the heir apparent, the lion cub destined to take over as leader of the pride. His uncle is jealous of Simba, and plots with a trio of hyenas to kill Simba, so that he can take his position. The uncle was originally named Taka (according to books) but he was given the name Scar after being injured by a buffalo. The trio of hyenas are called Shenzi, Banzai and Ed.

37. Dyeing wish? : HENNA
Henna has been used for centuries as a dye, not just for leather and wool, but also for the hair and skin. In modern days, henna is also used for temporary tattoos.

40. Cannabis-using : ON POT
“Potiguaya” is the Mexican-Spanish word for “marijuana leaves”. The slang name “pot” comes from “potiguaya”.

45. Spa offering : SHIATSU
“Shiatsu” is a Japanese word meaning “finger pressure”, and is the name given to a style of massage.

54. Home of Carthage Palace : TUNIS
Carthage Palace in Tunis is the official residence of the President of Tunisia. The palace is located in the modern city of Carthage, which in turn is about ten miles from the ancient ruins of of Ancient Carthage.

60. Financial average : DOW
Dow Jones & Company was founded as a publishing house in 1882 by three newspaper reporters, Charles Dow, Edward Jones and Charles Bergstresser. Today, the company’s most famous publication has to be “The Wall Street Journal”. In 1884, Charles Dow started reporting the average dollar value of the stock of eleven companies, an index which spawned a whole host of metrics that carry the Dow Jones name to this day, including the renowned Dow Jones Industrial Average (DJIA), also known as the “Dow 30”.

62. One of TV’s Huxtables : THEO
Malcolm-Jamal Warner was the child actor who played Theo Huxtable on “The Cosby Show”. You can see the grown-up Warner today, playing Dr. Alex Reed on the BET sitcom “Reed Between the Lines”.