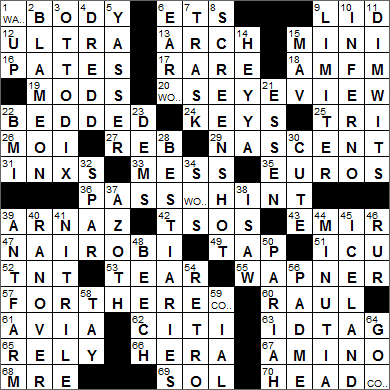 CROSSWORD SETTER: John Guzzetta
THEME: Warm to Cold … we have a rebus puzzle today, with a word ladder found within the rebus squares. Apologies for not being able to fit the complete word into each rebus square in my grid. The word ladder runs roughly from the top-left to the bottom-right, with the rebus words being:

Today’s Wiki-est, Amazonian Googlies
Across
1. Any old person, so to speak : WARM BODY
I’ll take ony old person, just give me a warm body to fill out the team, for example.

13. Mischievous : ARCH
Something described as “arch” can be cunning and sly, or mischievously playful.

15. Cooper preceder : MINI
The original mini was a fabulous car, one that I drove all over Ireland in my youth. It had a unique front-wheel-drive layout that took up very little space, allowing for a lot of room (relatively speaking) for passengers and baggage. One space-saving trick was to mount the engine transversely, so it sits rotated 90-degrees from the norm. That engine had a capacity of only 848cc. In 1961, a Mini Cooper model was introduced, a sporty version of the Mini. The Mini Cooper was a phenomenal hit, especially after repeated wins in the Monte Carlo Rally. The Mini marque has been owned by BMW since 1994.

16. Party spreads : PATES
Pâté is a rich spreadable paste made up of a mixture of ground meat and fat, to which various vegetables, herbs and spices may be added. The most famous version of the paste is pâté de foie gras, made from the fattened livers of geese (“foie gras” means “fat liver” in French).

24. Command and control : KEYS
The Command key is found on an Apple keyboard, and the Control key on a PC keyboard.

25. Part of 52-Across : TRI-
(52A. Buster of rock : TNT)
TNT is an abbreviation for trinitrotoluene. Trinitrotoluene was first produced in 1863 by the German chemist Joseph Wilbrand, who developed it for use as a yellow dye. TNT is relatively difficult to detonate so it was on the market as a dye for some years before its more explosive properties were discovered.

31. Band with the 1988 #1 hit “Need You Tonight” : INXS
INXS (pronounced “in excess”) was a rock band from Australia. The band formed in 1977 in Sydney as the Farriss Brothers, as three of the original lineups were indeed brothers.

35. Currency that features architecture, not portraiture : EUROS
Euro coins carry a design on one side that indicates the country of issue (Ireland uses a harp, for example). Euro banknotes, on the other hand, lack any such indication. The banknotes all feature stylized architectural designs of bridges, arches and gateways that reflect the large number of historic structures found throughout the continent.

39. Bandleader who became a 1950s sitcom star : ARNAZ
Desi Arnaz was famous for his turbulent marriage to Lucille Ball. Arnaz was a native of Cuba, and was from a privileged family. His father was Mayor of Santiago and served in the Cuban House of Representatives. However, the family had to flee to Miami after the 1933 revolt led by Batista.

42. General ___ chicken : TSO’S
General Tso’s chicken is an American creation, often found on the menu of a Chinese restaurant. The name General Tso may be a reference to General Zuo Zongtang of the Qing Dynasty, but there is no clear link.

43. Desert royal : EMIR
In English, emir can also be written as emeer, amir and ameer (watch out for those spellings in crosswords!).

47. Capital in sight of Kilimanjaro : NAIROBI
Nairobi is the capital and largest city in the African nation of Kenya. The city is named for the Nairobi River, which in turn takes its name from the Maasai “Enkare Nairobi” meaning “Cool Water”. Nairobi was founded in 1899 as a stop on the Kenya-Uganda railroad, at a time when the country was a British colony.

Kilimanjaro is a dormant volcano in Tanzania, and is the highest mountain in the whole of Africa. I was having lunch recently with the parents of my son’s girlfriend. The young lady’s mother casually mentioned in the conversation that she summited Kilimanjaro last year. I paid for lunch …

51. Post-surgery place : ICU
After being wheeled out of the Operating Room (OR) a patient might spend some time in the Intensive Care Unit (ICU).

55. Judge of 1980s-’90s TV : WAPNER
Joseph Wapner is a retired judge who was the first person to star in the reality show “The People’s Court”. With Wapner on the bench, the first manifestation of “The People’s Court” ran for almost 2,500 episodes, from 1981 to 1993. Prior to gracing our TV screens, Judge Wapner served for 18 years on the Los Angeles County Superior Court.

60. Leader Castro : RAUL
Raul Castro is the younger brother of Fidel Castro. Raul has been President of Cuba since 2008, when Fidel stepped aside.

61. Athletic shoe brand : AVIA
The Avia brand name for athletic shoes was chosen as “avia” is the Latin word for “to fly”, and suggests the concept of aviation. Avia was founded in Oregon in 1979.

62. ___ Field : CITI
Citi Field is the relatively new baseball stadium used by the New York Mets, and sits right next door to Shea stadium, where the Mets had played for decades. And the name of course comes from sponsor Citigroup.

66. Goddess in a chariot drawn by peacocks : HERA
In Greek mythology, Hera was the wife of Zeus and was noted for her jealousy and vengeful nature, particularly against those who vied for the affections of her husband. The equivalent character in Roman mythology was Juno. Hera was the daughter of Cronus and Rhea.

67. ___ acid : AMINO
Amino acids are essential to life in many ways, not least of which is their use as the building blocks of proteins.

68. Field ration, for short : MRE
The Meal, Ready-to-Eat (MRE) comes in a lightweight package that’s easy to tote around. The MRE replaced the more cumbersome Meal, Combat, Individual (MCI) in 1981, a meal-in-a-can. In turn, the MCI had replaced the C-ration in 1958, a less sophisticated meal-in-a-can with a more limited choice.

Down
3. German Expressionist who was blacklisted by the Nazis : OTTO DIX
Otto Dix was a German painter and printmaker. Dix fought in the military in WWI and was profoundly affected by his experiences. Many of his artistic works reflected those experiences.

4. Title judge of a 1995 sci-fi film : DREDD
The 1995 movie “Judge Dredd” starring Sylvester Stallone in the title role, was loosely based on the comic book character of the same name. Judge Dredd may be an American hero from the future in an American city, but the comic is written and published in the UK.

5. The P.L.O.’s Arafat : YASSER
Yasser (also Yasir) Arafat was born in Cairo in 1929, the son of two Palestinians and the second-youngest of seven children. Arafat was beaten by his father as a child and so did not have a good relationship with him. Arafat did not attend his father’s funeral, nor did he visit his grave. The beatings were apparently administered because the young Arafat was repeatedly attending religious services in the Jewish quarter of Cairo. Arafat’s explanation was that he wanted to “study the mentality” of the Jewish people.

6. You can’t stop humming it : EARWORM
“Earworm” is a colloquial term used for a catchy tune that is also somewhat irritating, one that you can’t get out of your head.

7. “East of Eden” family name : TRASK
John Steinbeck considered “East of Eden” his magnus opus. Most of the storyline takes place near Salinas, just south of where I live here in the Bay Area. Two of the characters in the story are brothers Cal and Aron Trask, representative of the biblical Cain and Abel.

11. Dunces : DIMWITS
John Duns Scotus was a theologian and scholar in the Middle Ages, responsible for many writings that were used as textbooks in British universities of the day. New ideas developed during the English Renaissance, but Duns Scotus and his followers resisted the changes. The word “dunse” came into use as a way of ridiculing those refusing to learn anything new, a precursor to our modern usage of “dunce”.

15. Dallas player, for short : MAV
The Mavericks are the NBA franchise in Dallas, Texas. The team was founded in 1980, and the Mavericks name was chosen by fan votes. The choice of “Mavericks” was prompted by the fact that the actor James Garner was a part-owner of the team, and Garner of course played the title role in the “Maverick” television series.

23. Blue state majority, for short : DEMS
On political maps, red states are Republican and blue states Democrat. The designation of red and blue states is a very recent concept, only introduced in the 2000 presidential election by TV journalist, the late Tim Russert. In retrospect, the choice of colors is surprising, as in other democracies around the world red is usually used to describe left-leaning socialist parties (the reds under the bed!), and blue is used for conservative right-wing parties. In election cycles, swing/battleground states are often depicted in purple.

28. Books that may depict dragons, unicorns and griffins : BESTIARIES
Bestiaries were books that were relatively popular in the Middle Ages, books that described individual types of bird or animal. Each beast’s entry had an illustration, as well as a moral tale associated with the beast.

37. Mercury, in alchemy : AZOTH
In the world of alchemy, “azoth” as the name given to the universal medicine that was sought by many. The related “alkahest” was the elusive universal solvent, a solvent that might even dissolve gold. Over time, the term “azoth” came to be used for the element mercury.

41. Latex-like glove material : NITRILE
Nitrile rubber is a synthetic rubber that is sold under trade names such as Nipol, Krynac and Europrene. Also known as nitrile butadiene rubber (NBR), it has many uses, especially in applications where ordinary rubber is not suitable. Examples are oil and fuel hoses in a car, protective gloves used in particularly harsh environment, and applications where there is concern about an allergic reaction to natural rubber.

45. Smallest NATO member by population : ICELAND
Iceland is the most sparsely populated country in the whole of Europe, with two-thirds of the nation’s population residing in and around the capital city of Reykjavik. Iceland was settled by the Norse people in AD 874, and was ruled for centuries by Norway and then Denmark. Iceland became independent in 1918, and has been a republic since 1944.

46. Sci-fi play of 1921 : RUR
Karel Čapek was a Czech writer noted for his works of science fiction. Čapek’s 1920 play “R.U.R.” is remembered in part for introducing the world to the word “robot”. The words “automaton” and “android” were already in use, but Capek gave us “robot” from the original Czech “robota” meaning “forced labor”. The initialism “R.U.R.”, in the context of the play, stands for “Rossum’s Universal Robots”.

50. Outcast : PARIAH
“Pariah” is an anglicized version of the Tamil word “Paraiyar”. The Paraiyar are a social group of about 9 million people found in some Indian states and in Sri Lanka. The term “pariah” came to be a general term for members of the lowest caste in society, outcasts.

56. “Star Wars” queen : PADME
In the “Star Wars” universe, Padmé Amidala is the Queen of the planet Naboo. Played very ably by Natalie Portman, Padmé becomes the secret wife of Anakin Skywalker, later revealed to be Darth Vader. As such, Padmé is also the mother of Luke Skywalker and his sister, Princess Leia Organa.

58. Scotland’s Firth of ___ : TAY
The Firth of Tay is an inlet on the east coast of Scotland into which empties Scotland’s largest river, the Tay. The city of Dundee lies on the Firth, and the city of Perth just inland on the Tay.

64. Peter out, as a trail : GO COLD
The verb phrase “to peter out”, meaning “to fizzle out”, originated in the 1840s in the American mining industry. While the exact etymology isn’t clear, it probably derives from the term “saltpetre”, a constituent of gunpowder.