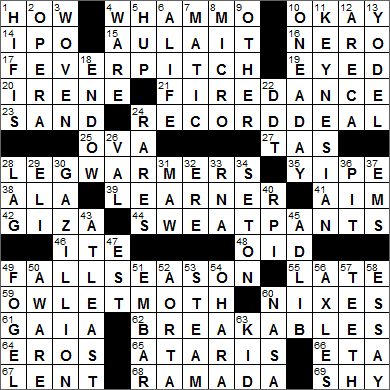 CROSSWORD SETTER: Freddie Cheng
THEME: Breakables … each of today’s themed answers starts with something that can be BROKEN:

Today’s Wiki-est, Amazonian Googlies
Across
14. 2013 Twitter event, briefly : IPO
An Initial Public Offering (IPO) is the very first offer of stock for sale by a company on the open market. In other words, an IPO marks the first time that a company is traded on a public exchange. Companies have an IPO to raise capital to expand (usually).

15. Café specification : AU LAIT
Café au lait (“coffee with milk”) is usually strong, drip coffee to which one adds steamed milk. At least that’s the way we tend to make in this country.

16. Mad stepson in “I, Claudius” : NERO
“I, Claudius” is a 1934 novel penned by Robert Graves, written in the form of an autobiography of Emperor Claudius of Rome. Graves wrote a sequel in 1935 called “Claudius the God”. Both books were adapted by the BBC into a fabulous television series that went by the name of the first book “I, Claudius”.

19. Took a gander at : EYED
To take “a gander” is to take a long look. It’s a term we’ve been using since the 1880s and comes from the idea that in taking a long look one might be craning one’s neck like a goose (or gander).

20. Memorable hurricane of 2011 : IRENE
Hurricane Irene caused extensive flooding in 2011 as it travelled through the Caribbean, up the East Coast of the United States and into the Atlantic seaboard of Canada. The hurricane was unusual in that it came so far up north. Fifty-five deaths were attributed to Irene.

42. Great Sphinx locale : GIZA
The Great Sphinx of Giza is a huge limestone statue of a mythical creature with the body of a lion and the head of a human. It is the largest monolithic statue in the world. Famously, the Great Sphinx is missing its nose and beard.

48. Suffix with planet : -OID
“Planetoid” is another word for “asteroid”.

59. Flying nocturnal insect : OWLET MOTH
Owlet moths are a large family of moths known more formally the Noctuidae. Most owlet moths fly at night and are attracted to light. Many species are preyed upon by bats. Some of these species have a defense mechanism, organs in the ears that pick up the sonar signals emitted by bats and cause the moth wings to spasm. The erratic flying helps the moth evade its hunter.

60. Puts the kibosh on : NIXES
“Kibosh” is something that constrains or checks. “Kibosh” looks like a Yiddish word but it isn’t, and is more likely English slang from the early 1800s.

61. Greek goddess of the earth: Var. : GAIA
In ancient Greek religion, Gaia was the Earth goddess, the mother of everything. The Roman equivalent was the goddess Terra.

64. Libidinous god : EROS
Someone described as “libidinous” is lustful, ruled by his or her libido.

“Libido” is a term first popularized by Sigmund Freud. Freud’s usage was more general than is understood today, as he used “libido” to describe all instinctive energy that arose in the subconscious. He believed that we humans are driven by two desires, the desire for life (the libido, or Eros) and the desire for death (Thanatos). Personally, I don’t agree …

65. Classic game consoles : ATARIS
At one point, the electronics and video game manufacturer Atari was the fastest growing company in US history. However, Atari never really recovered from the video game industry crash of 1983.

66. Greek H : ETA
Eta is the seventh letter of the Greek alphabet, and is a forerunner of our Latin character “H”. Originally denoting a consonant, eta was used as a long vowel in Ancient Greek.

67. Mardi Gras follower : LENT
In Latin, the Christian season that is now called Lent was termed “quadragesima” (meaning “fortieth”), a reference to the forty days that Jesus spent in the desert before beginning his public ministry. When the church began its move in the Middle Ages towards using the vernacular, the term “Lent” was introduced. “Lent” comes from “lenz”, the German word for “spring”.

68. Part of the Wyndham hotel group : RAMADA
The Ramada Inn hotel chain takes its name from the Spanish word for a shady resting place. A ramada is a shelter with a roof and no walls, mainly found in the American southwest. Nowadays a ramada can be temporary or permanent, but originally ramadas were makeshift shelters constructed by aboriginal Indians from branches or bushes.

69. Like a shrinking violet : SHY
Someone who is very shy might be described as a “shrinking violet”. The violet in this case is the flower, and not the girl’s name. The plant Viola odorata has been called “shrinking violet” because of its habit of hugging the ground as it grows.

Down
1. Players of 45s : HI-FIS
The first vinyl records designed to play at 33 1/3 rpm were introduced by RCA Victor in 1931, but were discontinued due to quality problems. The first Long Play (LP) 33 1/3 rpm disc was introduced by Columbia Records many years later in 1948, with RCA Victor following up with a 45 rpm “single” the following year, in 1949.

2. “Cavalleria Rusticana,” for one : OPERA
“Cavalleria rusticana” is an opera by Italian composer Pietro Mascagni that was first performed in 1890. The title translates as “Rustic Chivalry”, which is reference to the opera’s bucolic setting. The beautiful symphonic intermezzo from “Cavalleria rusticana” is often heard in “highlights from movie soundtracks” as it was used in the opening of “Raging Bull” and the finale of “The Godfather Part III”.

4. Ending with metal or mal- : -WARE
“Malware” is a collective term for software and program code that is created to intentionally disrupt and exploit computer systems. Viruses, worms, trojan horses and spyware are all covered by the term. “Malware” is short for “malicious software”.

7. Ronco Veg-o-___ : MATIC
Ronco is a company the builds and sells products mainly for the kitchen. Over the years the company has been closely associated with the “-O-Matic” suffix, especially the “Veg-O-Matic” vegetable slicer.

11. Like many mainstream economic theorists : KEYNESIAN
John Maynard Keynes was a British economist. Keynes argued that a country’s economy could and should be managed by fiscal and monetary policy in order to mitigate the effects of inevitable recessions and depressions.

12. Betel nut-yielding tree : ARECA
The betel nut is something that is chewed, especially in parts of Asia. “Betel nut” is a bit of misnomer, as the nut in question is actually an Areca nut from the Areca palm. For chewing, the Areca nut is wrapped in betel leaves and the whole thing is called a “betel nut”.

22. E.P.A.-banned pesticide : DDT
DDT is dichlorodiphenyltrichloroethane (don’t forget now!). DDT was used with great success to control disease-carrying insects during WWII, and when made available for use after the war it became by far the most popular pesticide. And then Rachel Carson published her famous book “Silent Spring”, suggesting there was a link between DDT and diminishing populations of certain wildlife. It was the public outcry sparked by the book, and reports of links between DDT and cancer, that led to the ban on the use of the chemical in 1972. That ban is touted as the main reason that the bald eagle was rescued from near extinction.

26. Kilmer who played Batman : VAL
Val Kilmer’s first big leading role in a movie was playing Jim Morrison in Oliver Stone’s 1991 biopic “The Doors”. A few years later, Kilmer was chosen for the lead in another big production, “Batman Forever”. Things haven’t really gone as well for Kilmer since then, I’d say. Off the screen, he flirted with the idea of running for Governor of New Mexico in 2010. A Hollywood actor as a Governor? Would never happen …

Denzel Washington is an actor from Mount Vernon, just outside New York City. Washington’s big break came with a TV role, playing Dr. Phillip Chandler on “St. Elsewhere” from 1982 to 1988.

33. Genetic messenger : RNA
Ribonucleic Acid (RNA) is an essential catalyst in the manufacture of proteins in the body. The genetic code in DNA determines the sequence of amino acids that make up each protein. That sequence is read in DNA by messenger RNA, and amino acids are delivered for protein manufacture in the correct sequence by what is called transfer RNA. The amino acids are then formed into proteins by ribosomal RNA.

36. Word before boss or bull : PIT
A pit boss (also “pit manager”) is a casino employee who works as a supervisor overseeing several floorpersons, who in turn supervise several dealers.

Sadly, the pit bull breed of dogs have earned themselves a poor reputation. I just read that pit bulls make up about 2% of the dogs in the US but about 40% of the dog attacks in the country have been attributed to the breed.

40. N.Y. sch. whose team is the Engineers : RPI
The Rensselaer Polytechnic Institute (RPI) is a private school in Troy, New York. The university is named after its founder Stephen Van Rensselaer who set up the school in 1824. The goal of RPI has always been the “application of science to the common purposes of life”, an objective set by the founder. Given that, the name for the school’s sports teams is quite apt: the Engineers.

45. Ditch the script : AD LIB
“Ad libitum” is a Latin phrase meaning “at one’s pleasure”. In common usage the phrase is usually shortened to “ad lib”. On the stage the concept of an “ad lib” is very familiar. For example, an actor may substitute his or her own words for forgotten lines using an ad lib, or a director may instruct an actor to use his or her own words at a particular point in a performance to promote a sense of spontaneity.

47. Guinness suffix : -EST
“The Guinness Book of World Records” holds some records of its own. It is the best-selling, copyrighted series of books of all time and is one of the books most often stolen from public libraries! The book was first published in 1954 by two twins, Norris and Ross McWhirter. The McWhirter twins found themselves with a smash hit, and eventually became very famous in Britain hosting a TV show based on world records.

49. 1993 Economics co-Nobelist Robert : FOGEL
Robert Fogel was a scientist and economist from New York City who jointly won the 1993 Nobel Prize in Economics. Fogel’s name is most associated with the concept of new economic history. Also known as “cliometrics”, new economic history is the application of economic theory to the study of history.

52. Line from the heart : AORTA
The aorta originates in the heart and extends down into the abdomen. It is the largest artery in the body.

54. U.S. women’s soccer star Kelley : O’HARA
Kelley O’Hara is soccer player who was a member of the national team when the US won the FIFA World Cup in 2015, and Olympic gold in 2012.