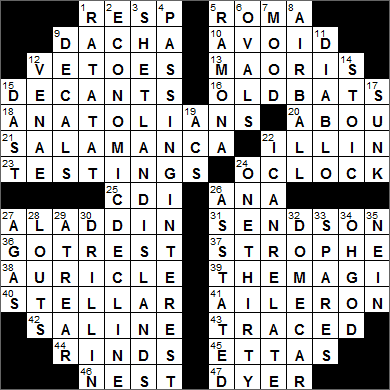 CROSSWORD SETTER: Joe Krozel
THEME: One-Thirty … we don’t really have a theme today, but we have some grid art. The grid resembles a clock face, with the little hand and big hand pointing to the time ONE-THIRTY:

Today’s Wiki-est, Amazonian Googlies
Across
1. Defendant in court: Abbr. : RESP
A respondent (resp.) in a legal proceeding is the defendant.

5. Monte Palatino locale : ROMA
In Italian, Palatine Hill (Monte Palatino) is one of the seven hills of Rome (Roma).

Supposedly, there were seven separate settlements on the top of seven hills east of the River Tiber, prior to the founding of the city of Rome. Tradition dictates that Romulus founded Rome on one of these hills, Palatine Hill, and the city came to encompass all seven existing settlements. The most famous hill in modern-day Rome is probably Vatican Hill, but it lies outside of walled ancient city.

9. Vacation home, abroad : DACHA
Dachas are usually second homes in Russia and the former Soviet Union that are located outside the city limits in rural areas. Residents/tenants of dachas are often called dachniks.

12. Sends back to Congress, say : VETOES
“Veto” comes directly from Latin and means “I forbid”. The word was used by tribunes of Ancient Rome to indicate that they opposed measures passed by the Senate.

13. Tiki carvers : MAORIS
The Māori are the indigenous people of New Zealand. The Māori are eastern Polynesian in origin and began arriving in New Zealand relatively recently, starting sometime in the late 13th century. The word “māori” simply means “normal”, distinguishing the mortal human being from spiritual entities.

A tiki is a large carving of wood or stone resembling a human form, found in Polynesian cultures. The carvings often mark out boundaries of sites sacred to the locals.

16. Biddies : OLD BATS
We use the term “biddy” to mean an “old woman”. Back in the mid-1800s, the term was developed over here in America and applied to an Irish maid-servant. Biddy is a nickname for a woman called Bridget.

18. Asian Turks : ANATOLIANS
Anatolia is also known as Asia Minor. It is the geographic part of Asia that protrudes out into the west, towards Europe, and is roughly equivalent to modern-day Turkey.

20. ___ Hassan, “Arabian Nights” figure : ABOU
“Abu al-Husn (also “Abou Hassan”) and His Slave-Girl Tawaddud” is a story from the “One Thousand and One Nights” (also “Arabian Nights”).

26. Tokyo-based carrier : ANA
All Nippon Airways (ANA) is a Japanese airline, second in size only to Japan Airlines (JAL).

27. Animated film made into a Tony-nominated Broadway musical : ALADDIN
The Disney animated feature “Aladdin” was released in 1992 and is one of the best features to come out of the studio, in my opinion, largely due to the great performance by Robin Williams who voiced the Genie. “Aladdin” was the most successful film of 1992, earning over $500 million worldwide, an unusual feat for an animated movie. The film was adapted as stage musical that opened in Seattle in 2011, and on Broadway in 2014.

37. Stanza of a poem : STROPHE
In general terms, in poetry a “strophe” is a pair of stanzas with alternating form. So, a poem might be made up from a number of strophes, and twice that number of stanzas.

38. Projecting part of the ear : AURICLE
“Auricle” is an alternative term for the pinna, the visible part of the ear that sits outside of the head. “Pinna” is the Latin for “feather” and is used anatomically for a wing, fin or other external appendage.

39. Star followers : THE MAGI
“Magi” is the plural of the Latin word “magus”, a term applied to someone who was able to read the stars. Hence, magi is commonly used with reference to the “wise men from the East” who followed the star and visited Jesus soon after he was born.

45. James and Jones : ETTAS
Etta James was best known for her beautiful rendition of the song “At Last”. Sadly, as she disclosed in her autobiography, James lived a life that was ravaged by drug addiction leading to numerous legal and health problems. Ms. James passed away in January 2012 having suffered from leukemia.

46. Something studied by a caliologist : NEST
The study of bird nests is called caliology. The term comes from the Greek “kalia” meaning “nest”.

Down
1. Snare drum sound : RAT A TAT
Snare drums are so called because they have a set of wire strands (called snares) stretched across the bottom surface of the drum. When the drum is struck, the snares vibrate against the bottom drumhead producing a unique sound.

3. Northernmost part of Great Britain : SHETLAND ISLANDS
The Shetland Islands in Scotland have given their name to a few breeds of animals, including Shetland cattle, Shetland ponies, Shetland sheep, Shetland sheepdogs and Shetland geese. The Shetlands lie about 110 miles northeast of the Scottish mainland.

5. Title heroine of an 1884 Helen Hunt Jackson novel : RAMONA
“Ramona” is an 1884 novel by Helen Hunt Jackson about a Scots-Native American orphan girl who suffers discrimination because of her mixed race. The novel was very popular in its day, and was adapted for the big screen four times, perhaps most notably in the 1936 film of the same name starring Loretta Young and Don Ameche. There is also a Ramona Pageant held annually in Hemet, California that features an outdoor stage adaptation of the novel. The Ramona Pageant has been going since 1923, and is the longest running outdoor play in the US.

8. Court embarrassment : AIR BALL
A “air ball” in basketball is a shot that misses, without even touching the rim, net or backboard.

9. Some exterior decoration : DECALS
A decal is a decorative sticker, short for “decalcomania”. The term is derived from the French “décalquer”, the practice of tracing a pattern from paper onto glass or perhaps porcelain.

11. Dios’s archenemy : DIABLO
In Spanish, the archenemy of God (dios) is the devil (diablo).

14. Unmovable : STOIC
Someone who is “stoic” is indifferent to pleasure or pain, is relatively impassive.

15. Dare, colloquially : DAST
Instead saying “he dares”, one might be a little quaint and say “he dast”.

17. X’d out completely, in the game battleships : SUNK
I think that the game is called “Battleship” and not “Battleships” …

Battleship was a game that we used to play as kids using pencil and paper. The game had been around at least since WWI, and was eventually turned into a board game by Milton Bradley in 1967.

27. Bygone military titles : AGAS
“Aga” (also “agha”) is a title that was used by both civil and military officials in the Ottoman Empire.

33. What “/ / /” may represent : SPARES
In bowling, the downing of all ten pins in two balls in the same frame is a “spare”, scoring ten points. The player gets a bonus, equal to the number of pins downed with the next ball, which could be up to ten. Hence, a spare can be worth up to 20 points. Spares are recorded on a scoresheet with diagonal lines.