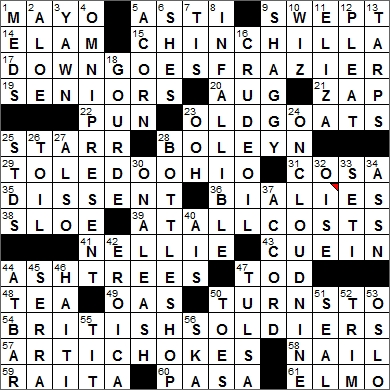 Today’s Wiki-est, Amazonian Googlies
Across
1. It’s part of a club : MAYO
The club sandwich is a double-decker affair with three layers of bread and two layers of filling. This style of sandwich has been around since the end of the 19th century, and some say it was invented at an exclusive gambling “club” in Saratoga Springs, New York.

5. Place for vino : ASTI
Asti is in the Piedmont region of northwest Italy. The region is perhaps most famous for its Asti Spumante sparkling white wine.

14. Ancient land east of the Tigris : ELAM
The ancient civilization of Elam was located east of Mesopotamia, in what is modern-day southwest Iran.

15. Fur source : CHINCHILLA
A chinchilla is a rodent found in the Andes in South America. The chinchilla is a little larger than a squirrel, and has velvet-like fur. It takes its name from the local Chincha people who made clothing out of the fur. Chinchillas are quite rare in the wild now as they been hunted almost out of existence, but there are plenty of farm-raised chinchillas around supporting the fur industry, sad to say …

17. Repeated cry in a 1973 fight : DOWN GOES FRAZIER!
Muhammad Ali and Joe Frazier had three memorable fights. The first was billed as the “Fight of the Century” and took place in 1971 in Madison Square Garden. It was a fight between two great boxers, both of whom were undefeated up till that point. Frazier won in a unanimous decision after fifteen rounds. A couple of years later, in 1973, Frazier lost his title to George Foreman. Ali and Frazier had a non-title rematch in 1974, with Ali coming out ahead this time, also in a unanimous decision. Later that year, Ali grabbed back the World Heavyweight Title in “The Rumble in the Jungle”, the famous “rope-a-dope” fight against George Foreman. That set the stage for the third and final fight between Ali and Frazier, “The Thrilla in Manila”. Ali won the early rounds, but Frazier made a comeback in the middle of the fight. Ali took control at the end of the bout, so much so that Frazier wasn’t able to come out of his corner for the 15th and final round. He couldn’t come out of his corner because both of his eyes were swollen shut, giving Ali a victory due to a technical knockout (TKO).

20. Mo. of Indian Independence Day : AUG
The national holiday called Independence Day is celebrated in India on 15 August every year. It commemorated independence from Britain, achieved in 1947. Indian independence is noted as a relatively non-violent event, however, independence resulted in the partition of British India into India and Pakistan, which led to riots and many casualties.

21. Annihilate, arcade-style : ZAP
Our word “arcade” comes from the Latin “arcus” meaning “arc”. The first arcades were passages made from a series of arches. This could be an avenue of trees, and eventually any covered avenue. I remember arcades lined with shops and stores when I was growing up on the other side of the Atlantic. Arcades came to be lined with lots of amusements, resulting in amusement arcades and video game arcades.

22. Many a New York Post headline : PUN
The “New York Post” is a daily newspaper that has been around since 1801, when it was established by Founding Father Alexander Hamilton. In the 19th century, the paper was known as the “New York Evening Post”, and was respected broadsheet. Rupert Murdoch took over in 1993 and turned it into the tabloid rag that it is today.

25. Aptly named N.F.L. M.V.P. of the 1960s : STARR
Bart Starr is a retired football player and coach who spent his whole career with the Green Bay Packers. Starr was quarterback for the Packers from 1956 to 1971. Starr was named Most Valuable Player (MVP) in the first two Super Bowls.

28. Tudor who lost her head : BOLEYN
Anne Boleyn was the second wife of Henry VIII of England. Anne was found guilty of high treason after about a thousand days of marriage to Henry, accused of adultery and incest (probably trumped-up charges). She was executed, but perhaps her legacy lived on in her only child, as her daughter reigned for 45 very prosperous years as Queen Elizabeth I.

29. The Glass Capital of the World : TOLEDO, OHIO
Toledo, Ohio is known as the Glass City as several glass companies originated there, including Owens Corning and Pilkington North America. There is a large exhibition of glass art at the Toledo Museum of Art.

36. Polish rolls : BIALIES
I think that the plural of “bialy” is actually “bialys” and not “bialies” ….

“Bialy” is a Yiddish name for a small onion roll, which takes its name from Bialystok, a city in Poland.

The sloe is the fruit of the blackthorn bush, and the main flavoring ingredient in sloe gin.

41. Fox in the Baseball Hall of Fame : NELLIE
Nellie Fox was a second baseman, mainly for the Chicago White Sox from 1950 to 1963.

44. They might become bats : ASH TREES
Most wooden baseball bats are made out of ash. Bats are also made of maple, although maple bats are falling out of favor due to a tendency for them to shatter.

49. D.C.-based intercontinental grp. : OAS
The Organization of American States (OAS) has its headquarters in Washington, D.C. All the independent states in the Americas are members of the group except Honduras, which had its membership suspended after the country’s 2009 coup.

54. Many Victoria Cross recipients : BRITISH SOLDIERS
The Victoria Cross (VC) is the highest award for valour in the face of the enemy that is awarded in the British Commonwealth. The VC was introduced during the Crimean War in 1856. The award itself is struck from gunmetal, with many of them coming from melted down cannons captured from the Russians in 1855.

59. Indian yogurt dish : RAITA
Raita is a condiment served in Indian restaurants, made from yogurt flavored with coriander, cumin, mint and cayenne pepper.

Down
6. Hens and heifers : SHES
A calf is a young cow that is under three years old, and that has not had a calf.

9. Like yaks : SHAGGY
The English word “yak” is an Anglicized version of the Tibetan name for the male of the species. Yak milk is much prized in the Tibetan culture. It is made into cheese and butter, and the butter is used to make a tea that is consumed in great volume by Tibetans. The butter is also used as a fuel in lamps, and during festivals the butter is even sculpted into religious icons.

10. Richard Pryor title role, with “the” : WIZ
Richard Pryor was a stand-up comedian and actor from Peoria, Illinois. Pryor had a rough childhood. He was the daughter of a prostitute and was raised in his grandmother’s brothel after his mother abandoned him at the age of ten years. He was regularly beaten by his grandmother, and was molested as a child. Pryor grew up to become the comedian’s comedian, one who was much respected by his peers. Bill Cosby once said, “Richard Pryor drew the line between comedy and tragedy as thin as one could possibly paint it”.

13. Some cover-ups : TARPS
Originally, tarpaulins were made from canvas covered in tar that rendered the material waterproof. The word “tarpaulin” comes from “tar” and “palling”, with “pall” meaning “heavy cloth covering”.

18. Currency of 46-Down : GOURDE
The Gourde is the currency of Haiti, and is divided into 100 centimes.

24. Elated : ON CLOUD NINE
I don’t think that anyone is really certain of the etymology of the term “on cloud nine” meaning “elated”, but I do like the following explanation. The 1896 “International Cloud-Atlas” was a long-standing reference used to define cloud shapes. The biggest and puffiest of all cloud shapes (and most comfortable looking to lie on) is cumulonimbus. And you guessed it, of the ten cloud shapes defined in the atlas, cumulonimbus was cloud nine …

25. Touchstones: Abbr. : STDS
A “touchstone” is an excellent example of something, a sample that is used to test the excellence or genuineness of other samples,a standard.

32. Beauvais’s department : OISE
Beauvais is a cathedral city in the north of France, in the region known as Picardy, and in the administrative department of Oise.

33. Institute in the 1997 sci-fi film “Contact” : SETI
SETI is the name given to a number of projects that are searching for extraterrestrial life. The acronym stands for “search for extraterrestrial intelligence”. One of the main SETI activities is the monitoring of electromagnetic radiation (such as radio waves) reaching the Earth in the hope of finding a transmission from a civilization in another world.

42. Work first publicly performed at the Theater an der Wien in 1805 : EROICA
Beethoven originally dedicated his Symphony No. 3 to Napoleon Bonaparte. Beethoven admired the principles of the French Revolution and as such respected Bonaparte who was “born” out of the uprising. When Napoleon declared himself Emperor, Beethoven (and much of Europe) saw this as a betrayal to the ideals of the revolution so he changed the name of his new symphony from “Bonaparte” to “Eroica”, meaning “heroic” or “valiant”.

45. Junípero ___, founder of San Francisco : SERRA
Junípero Serra was a Spanish missionary, a founder of several missions out here in California. Among those associated with Serra is the Mission in Carmel, where Serra’s remains are buried, and Mission San Juan Capistrano, the chapel of which is believed to be the oldest standing building in the state.

46. Where 18-Downs are currency : HAITI
The Republic of Haiti occupies the smaller, western portion of the island of Hispaniola in the Caribbean. The rest of the island is taken up by the Dominican Republic. Haiti is one of only two nations in the Americas to have French as an official language, the other being Canada.

47. Home of minor-league baseball’s Drillers : TULSA
The Tulsa Drillers are a minor league affiliate of the Colorado Rockies. The batting coach for the Tulsa Drillers was killed in 2007 when a line drive hit him in the neck, rupturing an artery. Sad …

53. Europe’s Tiger City : OSLO
The Norwegian capital Oslo was referred to as “the City of Tigers” (“Tigerstaden”) in the 19th-century as it was perceived as cold and dangerous.

55. Cousin of a chickadee : TIT
Chikadees are group of birds in the tit family, with some species within the group called chickadees and some called tits. The name chickadee is imitative of the bird’s alarm call “chick-dee dee dee”.

56. The English Beat’s genre : SKA
Ska originated in Jamaica in the late fifties and was the precursor to reggae music. No one has a really definitive etymology of the term “ska”, but it is likely to be imitative of some sound.

The Beat is a ska revival band founded in Birmingham, England in 1978. The band is known as the English Beat here in North America, and as the British Beat down under in Australia.