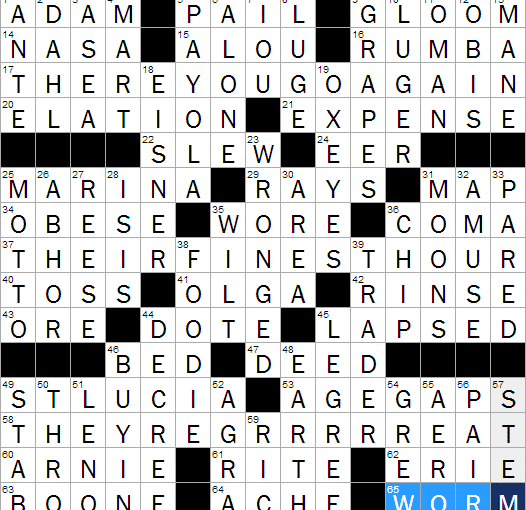 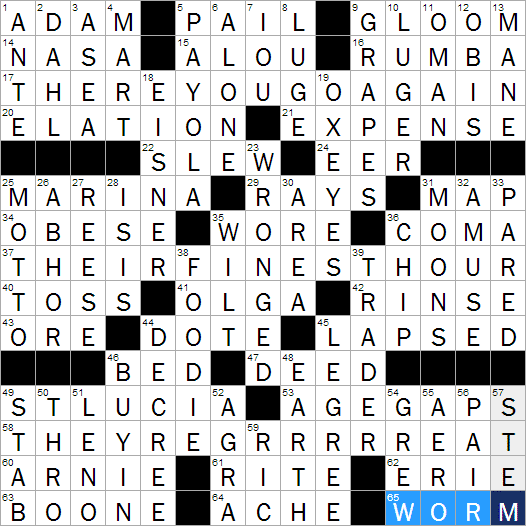 CROSSWORD SETTER: Gareth Bain
THEME: There, Their, They’re … today’s three themed answers start with three homonyms THERE, THEIR and THEY’RE:

17A. Famous debate words from Reagan to Carter : THERE YOU GO AGAIN
37A. Churchill’s description of the Royal Air Force during W.W. II : THEIR FINEST HOUR
58A. Endorsement from Tony the Tiger : THEY’RE GRRRRREAT!

Today’s Wiki-est, Amazonian Googlies
Across
1. Eve’s mate : ADAM
Eve is named as the wife of Adam in the Hebrew Bible and Christian Old Testament. However, Adam’s wife is not specifically named in the Qur’an.

14. Launcher of the Curiosity rover : NASA
NASA’s Curiosity rover is the fourth in a series of unmanned surface rovers that NASA has sent to Mars. Previous rovers are the Sojourner rover (1997), Spirit rover (2004-2010) and Opportunity rover (2004-present). Curiosity rover was launched in November of 2011, and landed on Mars in August 2012 after having travelled 350 million miles. After that long journey, Curiosity landed just 1½ miles from its targeted touchdown spot.

15. Major League Baseball family name : ALOU
Felipe Alou is a former professional baseball player and manager. Alou managed the Montreal Expos from 1992 to 2001, and the San Francisco Giants from 2003 to 2006. Alou was born and raised in the Dominican Republic and came to the US to play for the Giants in 1955. Felipe’s brothers Matty and Jesús followed him to the US, and into Major League baseball.

16. Cuban dance : RUMBA
The rumba is a Cuban dance, with influences brought by African slaves and Spanish colonists. The name “rumba” comes from “rumbo”, the Spanish word for “party, spree”.

17. Famous debate words from Reagan to Carter : THERE YOU GO AGAIN
There was just one televised debate between the candidates in the 1980 US presidential election. At one point in the exchange, President Carter was attacking then-Governor Reagan’s position on Medicare. Governor Reagan responded with the line “There you go again”, and in the process seemed to gain the upper hand in the exchange. The phrase was so effective that President Reagan used it in future exchanges during his presidency.

37. Churchill’s description of the Royal Air Force during W.W. II : THEIR FINEST HOUR
I think there is an error in this clue/answer. While Winston Churchill did make some eloquent references to the RAF in his speeches, the phrase “their finest hour” was a reference to all the people of the British Empire and Commonwealth.

Soon after Winston Churchill took over as Prime Minister of the UK in 1940, he delivered some stirring speeches that rallied the country in the face of German victories right across Europe. The first of these was his “Blood, toil, tears, and sweat” speech as he reported the formation of a new coalition government designed to unite the country in time of war. The second was his “We shall fight on the beaches” speech, as he reported the successful evacuation of Allied troops from Dunkirk. The third speech concluded with, “This was their finest hour”, words delivered to Parliament just as France fell, and Churchill pledged that the British Commonwealth would fight on, alone if necessary. The last lines of this third speech, from this magnificent orator, were:

… But if we fail, then the whole world, including the United States, including all that we have known and cared for, will sink into the abyss of a new dark age made more sinister, and perhaps more protracted, by the lights of perverted science. Let us therefore brace ourselves to our duties, and so bear ourselves, that if the British Empire and its Commonwealth last for a thousand years, men will still say, ‘This was their finest hour’.

The Royal Air Force (RAF) is the oldest independent air force in the world (i.e. the first air force to become independent of army or navy forces). The RAF was formed during WWI on 1 April 1918, a composite of two earlier forces, the Royal Flying Corps (part of the Army) and the Royal Naval Air Service. The RAF’s “finest hour” has to be the Battle of Britain when the vastly outnumbered British fighters fought off the might of the Luftwaffe causing Hitler to delay his plan to cross the English Channel. This outcome prompted Winston Churchill to utter the memorable words:

40. Deep-six : TOSS
To deep-six something is to toss it, possibly overboard, or to completely destroy it. The derivation of this slang term is from “six feet deep”, not the length of a fathom but rather the traditional depth of a grave.

41. ___ Korbut, 1972 Olympic gymnastics star : OLGA
Olga Korbut is from modern-day Belarus, but was born during the days of the Soviet Union. Korbut competed for the USSR team in the 1972 and 1976 Olympic Games. She was 17 when she appeared in the 1972 Munich Games, and had been training in a sports school since she was 8-years-old. The world fell in love with her as she was a very emotional young lady, readily expressing joy and disappointment, something that we weren’t used to seeing in athletes from behind the Iron Curtain. Korbut immigrated to the US in 1991 and now lives in Scottsdale, Arizona.

58. Endorsement from Tony the Tiger : THEY’RE GRRRRREAT!
Tony the Tiger has been the mascot of Frosted Flakes cereal since the product’s introduction in 1951. As Tony would say, “They’re Gr-r-reat!” Well, I thought they were when I was a lot younger …

60. Golfer Palmer, to his “army” : ARNIE
Arnold Palmer is one of the greats of the world of golf. Palmer is very popular with many fans of the game, and his followers are usually referred to as “Arnie’s Army”.

62. Canal of song : ERIE
The song “Fifteen Miles on the Erie Canal” was written in 1905. The lyrics are nostalgic and look back to the days when traffic on the canal was pulled by mules, bemoaning the introduction of the fast-moving engine-powered barges. The first line is “I’ve got an old mule and her name is Sal”.

63. “April Love” singer Pat : BOONE
“April Love” is the theme song for the 1957 film of the same name that was a number-one hit for Pat Boone. Pat Boone stars in the film, opposite Shirley Jones.

Pat Boone is a singer and actor who was born in Jacksonville, Florida but was raised in Nashville. Boone has recorded 38 songs that made into the Top 40, and has appeared in 12 Hollywood movies. Back in 1955, one of his opening acts was Elvis Presley.

5. D.J.’s bribe : PAYOLA
Payola is the illegal practice of paying radio stations or disk jockeys to repeatedly play a particular piece of music. The impetus behind the crime is that the more often a song is played, the more likely it is to sell. The term “payola” comes from the words “pay” and “Victrola”, an RCA brand name for an early phonograph.

6. “Home ___” (Macaulay Culkin film) : ALONE
“Home Alone” is a 1990 film starring Macaulay Culkin that has become a Christmas classic. Culkin was nominated for a Best Actor Golden Globe for his performance, the youngest actor ever to be so honored.

8. Olympic sled : LUGE
A luge is a small sled used by one or two people, on which one lies face up and feet first. The luge can be compared to the skeleton, a sled for only one person and on which the rider lies face down and goes down the hill head-first.

10. German pistol : LUGER
The correct name for the pistol known as the Luger is the Pistole Parabellum 1908. The Luger’s design was patented by Georg J. Luger in 1898, and became most famous for its use by the Germans during WWII. It was produced from 1900 to 1945, although 200 Lugers were produced recently and sold for over $17,000 each.

11. Gulf country : OMAN
Oman lies on the southeast coast of the Arabian Peninsula and is neighbored by the OAE, Saudi Arabia and Yemen. The capital city of Muscat has a strategic location on the Gulf of Oman.

12. Geishas’ sashes : OBIS
The sash worn as part of traditional Japanese dress is known as an obi. The obi can be tied in what is called a butterfly knot.

18. Former Disney chief Michael : EISNER
Michael Eisner took over as CEO of the Walt Disney Company in 1984. Eisner has been attributed with turning Disney around, as the company was floundering really since 1966 when Walt Disney died. Eisner had a good run, but ran foul of Walt Disney’s nephew Roy Disney who led a revolt that resulted in Eisner’s resignation in 2005.

27. Witherspoon of “Legally Blonde” : REESE
Reese is not actually actress Witherspoon’s given name. She started out life as Laura Jeanne Witherspoon. Reese is her mother’s maiden name.

“LEGALLY blonde” is a 2001 comedy film starring Reese Witherspoon as a girlish sorority president who heads to Harvard to earn a law degree. “LEGALLY blonde” was successful enough to warrant two sequels as well as a spin-off musical that is still playing in London’s West End.

28. Sister and wife of Osiris : ISIS
Isis was the ancient Egyptian goddess of fertility, as well as the protector of the dead and the goddess of children.

Osiris was the Egyptian god of the underworld. Osiris was the son of Geb the Earth god, and Nut the sky goddess. His wife Isis was also his sister …

31. Mars’s Phobos and Deimos : MOONS
Mars has two moons, the larger of which is Phobos and the smaller is Deimos. “Phobos” is the Greek word for “fear”, and “Deimos” is Greek for “dread”.

Harriet Beecher Stowe’s first novel ended up being her most famous, “Uncle Tom’s Cabin”. Stowe followed it up with an 1856 novel called “Dred: A Tale of the Great Dismal Swamp”.

51. Recently retired Jay : LENO
Jay Leno was born James Leno in New Rochelle, New York. Jay’s father was the son of Italian immigrants, and his mother was from Scotland. Leno grew up in Andover, Massachusetts and actually dropped out of school on the advice of a high school guidance counsellor. However, years later he went to Emerson college and earned a Bachelor’s degree in speech therapy. Leno also started a comedy club at Emerson in 1973. Today Jay Leno is a car nut and owns about 200 vehicles of various types. You can check them out on his website: www.jaylenosgarage.com.

52. Site of the Taj Mahal : AGRA
The most famous mausoleum in the world has to be the Taj Mahal in Agra, India. The Taj Mahal was built after the death of the third wife of Shah Jahan, Mumtaz Mahal (hence the name of the mausoleum). The poor woman died in childbirth delivering the couple’s 14th child.

59. Ocasek of the Cars : RIC
Ric Ocasek is an American musician of Czech heritage, and was the lead vocalist of the rock band known as the Cars.