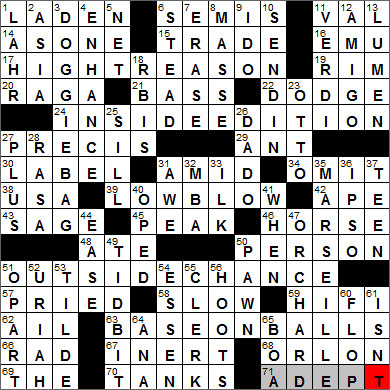 CROSSWORD SETTER: Gary Cee
THEME: Starting Pitches … each of today’s themed answers start with a type of pitch in baseball, giving us four balls that can lead to a walk, a BASE ON BALLS:

Today’s Wiki-est, Amazonian Googlies
Across
1. Filled with freight : LADEN
The verb “lade” meaning “to load” comes from an Old English word “hladan”. Lade also used to mean “to draw water” and indeed gave us our word “ladle”. So “lade” and “ladle” are close cousins.

11. Kilmer of “Heat” : VAL
Val Kilmer’s first big leading role in a movie was playing Jim Morrison in Oliver Stone’s 1991 biopic “The Doors”. A few years later, Kilmer was chosen for the lead in another big production, “Batman Forever”. Things haven’t really gone as well for Kilmer since then, I’d say. Off the screen, he flirted with the idea of running for Governor of New Mexico in 2010. A Hollywood actor as a Governor? Would never happen …

16. Dingo’s avian prey : EMU
The emu has had a tough time in Australia since man settled there. There was even an “Emu War” in Western Australia in 1932 when migrating emus competed with livestock for water and food. Soldiers were sent in and used machine guns in an unsuccessful attempt to drive off the “invading force”. The emus were clever, breaking their usual formations and adopting guerrilla tactics, operating as smaller units. After 50 days of “war”, the military withdrew. Subsequent requests for military help for the farmers were ignored. The emus had emerged victorious …

The dingo is a wild dog of Australia. The dingo is thought to have originated from domesticated dogs that were brought to Australia with humans that settled the land centuries ago.

17. Grounds for impeachment : HIGH TREASON
Treason is a serious crime committed against the nation (or the sovereign). One who commits treason is called a traitor. In the past, the term treason also applied to lesser crimes (like a woman killing her husband) so there was a differentiation between high treason against the king, and “petit treason”, against a more common citizen.

20. Music of Mumbai : RAGA
Raga isn’t really a type of music, but has been described as the “tonal framework” in which Indian classical music is composed. Ravi Shankar was perhaps the most famous raga virtuoso (to us Westerners).

21. ___ clef : BASS
Clef is the French word for “key”. In music, a clef is used to indicate the pitch of the notes written on the stave. The bass clef is also known as the F-clef.

24. TV show anchored by Bill O’Reilly from 1989 to 1995 : INSIDE EDITION
“Inside Edition” is a news magazine program that has be on the air since 1989. The first anchor for the show was Englishman David Frost, who was quickly replaced with Bill O’Reilly. The current anchor is Deborah Norville, who took over from O’Reilly in 1995.

Bill O’Reilly is best known as the host of “The O’Reilly Factor” on the Fox News Channel. O’Reilly’s positions are very much on the right side of the political spectrum, with at least one notable exception: his opposition to the death penalty. O’Reilly suggests that convicted murderers should be locked up without the possibility of parole, in a military prison with forced labor for eight hours a day.

27. Concise summary : PRECIS
A “precis” is an abstract, a concise summary. The term comes from the French “précis” meaning “cut short”.

38. Gannett’s ___ Today : USA
Gannett is a media holding company that is the largest newspaper publisher in the country in terms of circulation. The company’s flagship publication is “USA Today”.

46. Palomino or pinto : HORSE
A palomino is a horse with a gold coat and a white mane and tail. The color was prized by TV and film producers in the golden age of the Western. Two of the most famous palominos were Trigger ridden by Roy Rogers, and Mr. Ed who had his own TV show.

A “pinto” is a horse with patchy markings of white mixed with another color. “Pinto” means “painted” in American Spanish.

59. Old record player : HI-FI
Hi-fi systems were introduced in the late forties, and is audio equipment designed to give a much higher quality reproduction of sound than cheaper systems available up to that point. “Hi-fi” of course stands for “high fidelity”.

63. Batter’s reward after pitches like those described at the starts of 17-, 24-, 39- and 51-Across : BASE ON BALLS
A “base on balls” is the technical term for a walk in baseball. It occurs when a batter has received four pitches that the umpire deems to be “balls”, pitches that have not passed through the strike zone.

67. ___ gas : INERT
An inert gas can be different from a noble gas. Both are relatively non-reactive, but a noble gas is an element. An inert gas on the other hand, might be a compound i.e. made up of more than one element.

68. Cashmere alternative : ORLON
Orlon is the brand name used by the DuPont Corporation for the acrylic fibers the company developed in 1941.

Cashmere wool comes from not only the Cashmere goat, but also from other types of goat. Technically, cashmere isn’t really a wool, but rather a hair. Unlike hair, wook is elastic and grows in clusters.

Down
1. Cowardly Lion portrayer Bert : LAHR
Bert Lahr’s most famous role was the cowardly lion in “The Wizard of Oz”. Lahr had a long career in burlesque, vaudeville and on Broadway. Lahr also starred in the first US production of Samuel Beckett’s play “Waiting for Godot”, alongside Tom Ewell.

2. Where Kyrgyzstan is : ASIA
Kyrgyzstan is a landlocked country in Central Asia that is a former Soviet Socialist Republic (SSR). The country name’s root “Kyrgyz” translates as “We are forty”. This a reference to the forty united clans in the region that united under a legendary hero named Manas. The Kyrgyzstan flag also features a sun with forty rays, a further reference to the clans.

10. Submit, as a résumé : SEND IN
A résumé is a summary of a person’s job experience and education and is used as a tool by a job seeker. In many countries, a résumé is equivalent to a curriculum vitae. “Résumé” is the French word for “summary”.

11. “Rigoletto” composer : VERDI
Giuseppe Verdi was an Italian composer mainly of operas who was active during the Romantic era. Equally as famous as Verdi’s operas, are arias from those operas such as “La donna è mobile” from “Rigoletto”, “The Drinking Song” from “La Traviata” and “The Chorus of the Hebrew Slaves” from “Nabucco”.

12. Pal in Peru : AMIGO
Peru’s name comes from the word “Biru”. Back in the early 1500s, Biru was a ruler living near the Bay of San Miguel in Panama. The territory over which Biru ruled was the furthest land south in the Americas known to Europeans at that time. The Spanish conquistador Francisco Pizarro was the first European to move south of Biru’s empire and the land that he found was designated “Peru”, a derivative of “Biru”.

13. Unit of light : LUMEN
The lumen is a measure of the amount of visible light emitted by a source.

18. Hank Aaron’s 2,297 : RBIS
The great Hank Aaron (Hammerin’ Hank) has many claims to fame. One notable fact is that he is the last major league baseball player to have also played in the Negro League.

23. Filmmaker Preminger : OTTO
Otto Preminger was noted for his films that pushed the envelope in terms of subject matter, at least in the fifties and sixties. Great examples would be 1955’s “The Man with the Golden Arm” that dealt with drug addiction, 1959’s “Anatomy of a Murder” that dealt with rape, and 1962’s “Advise and Consent” that dealt with homosexuality. If you’ve seen these films, you’ll have noticed that the references are somewhat indirect and disguised, in order to get past the censors.

25. Place for a window box : SILL
A “sill plate” or simply “sill” is an architectural term for a bottom horizontal member to which vertical members are attached. A “window sill” is specific sill plate that is found at the bottom of a window opening.

26. Middle part of a pedestal : DADO
In architecture, the term “dado” is used to describe the part of pedestal that lies between the based and the cornice or next level. A dado is also the lower section of a wall in which there is a dividing line with the upper part of the wall, a division such as a chair rail.

28. Tabula ___ : RASA
Tabula rasa (plural: tabulae rasae) is the idea that people are born with a “blank slate”, and that knowledge comes from experience and perception.

35. “The Count of Monte Cristo” setting : MARSEILLE
Marseille (often written “Marseilles” in English) is the second largest city in France, after Paris. Marseille is also the largest commercial port in the country. I used to live nearby, and it’s a lovely, lovely place.

“The Count of Monte Cristo” is an 1844 novel by the French author Alexandre Dumas. Dumas’ other famous title is “The Three Musketeers”.

37. Archie, Betty or Veronica : TEEN
Archie Andrews was the main character in a comic book series introduced in 1941 by Archie Comics. Archie was such a successful character that he went on to appear in a radio series, a syndicated comic strip and two television cartoon shows. Famously, Archie got himself in a love triangle with Betty Cooper, the girl next door, and Veronica Lodge, the only child of the richest man in town.

50. One of 16 in a chess set : PAWN
In the game of chess, the pawns are the weakest pieces on the board. A pawn that can make it to the opposite of the board can be “promoted” to a piece of choice, usually a queen. Using promotion of pawns, it is possible for a player to have two or more queens on the board at one time. However, standard chess sets come with only one queen per side, so a captured rook is often used as the second queen by placing it on the board upside down.

52. ___ Heep : URIAH
Uriah Heep is a sniveling insincere character in the novel “David Copperfield” by Charles Dickens. The character is such a “yes man” that today, if we know someone who behaves the same way, then we might call that person a “Uriah Heep”.

54. W.W. II bomb site : ESSEN
I knew a man back in Ireland, a German national from the city of Essen. He had very sad tales to tell from the days of WWII. As a young boy he lost his (socialist) parents during the Nazi purges early in the war. In 1943 he was living with his grandmother and still attending school when he was drafted into the army along with the rest of his class (at 14 years of age). His platoon leader was his school teacher who made a point of tutoring the boys in place of military drilling. One day he was on guard duty with his class/platoon at the dam above the city, and along come the Dam Busters with their bouncing bombs. The raid was successful (from the perspective of the Allies), but he described terrible hardship faced by the people below the dam due to flooding of the farmland that surrounded the factories.

65. Slithering predator : BOA
Boa constrictors are members of the Boidae family of snakes, all of which are non-venomous. Interestingly, the female boa is always larger than the male.