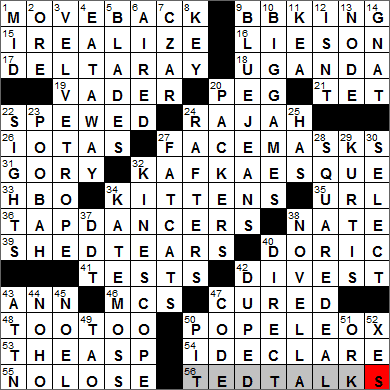 Today’s Wiki-est, Amazonian Googlies
Across
9. “3 O’Clock Blues” hitmaker, 1952 : BB KING
B.B. King is the stage name of Riley B. King, the celebrated blues guitarist and singer-songwriter. He truly is a dedicated performer, as he has been doing gigs for 52 years, and has made over 15,000 appearances on stage. King’s first hit was “3 O’Clock Blues”, recorded in 1952.

16. Uses, as a chaise : LIES ON
A “chaise longue” is an upholstered, sofa-like chair that is long enough to support the legs. “Chaise longue” is French for “long chair”. And, the term has nothing to do with a “lounge” … it’s a “longue” chair, not a “lounge” chair.

17. Particle ejected from an atom during ionization : DELTA RAY
A cloud chamber is used for the visual detection of ionizing radiation. It consists of a sealed container (with a glass wall) with a saturated vapor inside. When alpha or beta radiation passes through the vapor, particles of the vapor are ionized causing localized condensation to take place (formation of a cloudy streak) and the track of the radiation can be seen. Sometimes the main track, particularly for a large alpha particle, can have small branches coming off it. These branches indicate that the alpha radiation has knocked electrons out of some atoms in the vapor, and these electrons create their own small tracks. Such secondary radiation is known as a delta ray.

19. “Star Wars” villain name : VADER
The “Star Wars” character Darth Vader was born Anakin Skywalker, and eventually becomes the father of Luke Skywalker and Princess Leia. Vader was ranked by the American Film Institute as the third greatest movie villain of all time, behind Hannibal Lecter and Norman Bates. He is in good company …

21. Celebration of the arrival of spring : TET
The full name for the New Year holiday in Vietnam is “Tet Nguyen Dan” meaning “Feast of the First Morning”, with the reference being to the arrival of the season of spring. Tet usually falls on the same day as Chinese New Year.

24. Eastern hereditary title : RAJAH
“Raja” (also “rajah”) is word derived from Sanskrit that is used particularly in India for a monarch or princely ruler. The female form is “rani” (also “ranee”) and is used for a raja’s wife.

26. Specks : IOTAS
Iota is the ninth letter in the Greek alphabet. We use the word “iota” to portray something very small as it is the smallest of all Greek letters.

27. Things worn at home? : FACEMASKS
In baseball, the catcher and the umpire war facemasks.

32. Maddeningly surreal : KAFKAESQUE
Franz Kafka was born in 1883 in Prague, then part of Bohemia and today the capital of the Czech Republic. Kafka is known as one of the greatest novelists who worked in the German language, and even has an adjective named after him. Something that is “kafkaesque” is senseless, disorienting and may have menacing complexity. As it was for many great artists, Kafka’s fame came after his death when much of his work was published.

33. “Girls” home : HBO
“Girls” is an HBO comedy-drama series that was created by and stars Lena Dunham. The show follows a group of female friends living their lives in New York City.

38. ___ Ruess, lead singer of Fun : NATE
Fun is an indie pop band from New York City that was formed by Nate Ruess, who is the group’s lead singer.

40. Order of ancient Greeks : DORIC
The Doric was one of the three classical orders of architecture, the others being the Ionic and the Corinthian.

43. Matt’s onetime “Today” co-host : ANN
The television journalist Ann Curry is perhaps best known for the time she spent as co-host on NBC’s “Today” show. NBC executives asked Curry to resign from the “Today” show because ratings were low. I just read online that Curry was also pushed out because of the way she insisted on dressing and because she refused to dye her gray hair. I hope that isn’t true …

Matt Lauer became the news anchor for NBC’s “The Today Show” when he landed the gig as co-host after Bryant Gumbel retired from the job in 1997.

46. Runs the show, for short : MCS
Master or mistress of ceremonies (MC)

47. Like prosciutto : CURED
Parma is a city in northern Italy, famous for its ham (prosciutto) and cheese (parmesan). Although the word prosciutto is used in Italian to mean ham however it is prepared, in English we use the word to describe the dry-cured ham that is served raw, in thin slices. Apparently, prosciutto can be made out of the meat from the leg of a pig, or from the thigh of a wild horse.

50. Head of the Catholic Church when Luther’s “95 Theses” was posted : POPE LEO X
Pope Leo X is remembered as the last pope who was not a priest before taking office. Leo X was also known for granting indulgences to those willing to donate funds for the reconstruction of St. Peter’s Basilica, a practice that contributed to the revolt against the church by Martin Luther. As a result of the revolt, Leo X excommunicated Luther.

53. Daddy Warbucks’s henchman : THE ASP
The Asp is a secondary character in the comic strip “Little Orphan Annie”. The Asp is a henchman working for Oliver “Daddy” Warbucks, the antagonist in the storyline.

56. Lecture series with well over a billion views : TED TALKS
The acronym TED stands for Technology Entertainment and Design. TED is a set of conferences held around the world by a non-profit group called the Sapling Foundation. The conference subjects are varied, and the meetings are often led by big names such as Bill Clinton, Al Gore, Bill Gates and Jane Goodall. The Sapling Foundation then makes recordings of the conferences available for free online with the intent of disseminating the ideas globally. These conferences are known as “TED Talks”.

7. High-level appointee : CZAR
The term czar (also tsar) is a Slavic word that was first used as a title by Simeon I of Bulgaria in 913 AD. “Czar” is derived from the word “Caesar”, which was synonymous with “emperor” at that time.

9. Alternative to cords : BLUE JEANS
Denim fabric originated in Nimes in France (the words “de Nimes”, “from Nimes”, gives the fabric its name). The French phrase “bleu de Genes” meaning “blue of Genoa”, gives us our word “jeans”. Jeans was the name given to denim pants, but it is now used to describe “jean” material in general.

10. Bowls, e.g. : BIG GAMES
The oldest of all the bowl games is the Rose Bowl and so has the nickname “The Granddaddy of the Them All”. The first Rose Bowl game was played in 1902.

11. Mauna ___ : KEA
Mauna Kea is a dormant volcano on the Big Island of Hawaii, the peak of which is the highest point in the whole state. Mauna Kea is in effect the tip of a gigantic volcano rising up from the seabed.

14. Part of a moving cloud : GNAT
Gnats are attracted to the smell of rotting food, and to vinegar. Simple homemade traps that use vinegar are often constructed to attract and kill gnats.

20. Foe of the Vikings : PACKERS
When Curly Lambeau founded his small-town football team in Green Bay in 1919, he was working for the Indian Packing Company. Lambeau went to his employers looking for sponsorship and was given $250 provided that the team was named for the company. And so, the team was originally referred to as the Green Bay Indians, but by the time they took to the field for their first game it had changed to the Packers, and Lambeau was $250 richer.

The Minnesota Wild is the only one of these six teams that plays in St. Paul, while the rest play in Minneapolis.

23. Bigwig : POOBAH
The term “pooh-bah” (also “poobah”), meaning an ostentatious official, comes from the world of opera. Pooh-Bah is a character in the wonderful Gilbert & Sullivan comic opera “The Mikado”. Famously, Pooh-Bah holds many, many offices, including that of “Lord High Everything Else”.

29. Rapper ___ Blow : KURTIS
Kurtis Blow is rap singer whose real name is Kurt Walker. He was the first rapper to become a commercial success, and the first to be signed by a major label, way back in 1979! Kurtis Blow is also licensed minister and founder of the Hip Hop Church.

32. Part of a TV archive : KINESCOPE
A kinescope is a piece of equipment used to record on film a program being shown on a video monitor.

34. Model introduced in the 1990s : KATE MOSS
Kate Moss is an English supermodel. Moss is reported to have earned $9 million for her work in 2007. In 2008, a gold statue valued at almost $3 million was made of Moss for an exhibition in the British Museum. It is thought that the work is the largest gold statue to have been produced since those made by the Ancient Egyptians.

37. Target of a 1972 ban : DDT
DDT is dichlorodiphenyltrichloroethane (don’t forget now!). DDT was used with great success to control disease-carrying insects during WWII, and when made available for use after the war it became by far the most popular pesticide. And then Rachel Carson published her famous book “Silent Spring”, suggesting there was a link between DDT and diminishing populations of certain wildlife. It was the public outcry sparked by the book, and reports of links between DDT and cancer, that led to the ban on the use of the chemical in 1972. That ban is touted as the main reason that the bald eagle was rescued from near extinction.

38. “Breakfast at Tiffany’s,” for one : NOVELLA
“Breakfast at Tiffany’s” is a wonderful 1961 big screen adaptation of the novella of the same name by Truman Capote. The romantic lead in the film are played by Audrey Hepburn and George Peppard. Supporting roles are played by Patricia Neal, Buddy Ebsen and Mickey Rooney. Hepburn sung the marvelous “Moon River” in the film, which won the Oscar that year for the Best Original Song.

44. Big Apple neighborhood next to the Bowery : NOHO
NoHo is short for North of Houston (street), and is the equivalent area to SoHo, South of Houston, both in New York City.

45. “Christians Awake,” e.g. : NOEL
“Noël” is the French word for the Christmas season, ultimately coming from the Latin word for “birth” (natalis). Noel has come to be used as an alternative name for a Christmas carol.

49. Asian path : TAO
The Chinese character “tao” translates as “path”, but the concept of Tao signifies the true nature of the world.

51. Planet whose inhabitants age backward : ORK
“Mork & Mindy” was broadcast from 1978 to 1982. We were first introduced to Mork (played by Robin Williams, of course) in a special episode of “Happy Days”. The particular episode in question has a bizarre storyline culminating in Fonzie and Mork having a thumb-to-finger duel. Eventually Richie wakes up in bed, and alien Mork was just part of a dream! Oh, and “Nanu Nanu” means both “hello” and “goodbye” back on the planet Ork. “I am Mork from Ork, Nanu Nanu”. Great stuff …

52. Pair of Dos Equis : XES
Dos Equis lager was originally brewed in 1897, and back then was called “Siglo XX” (20th century) to celebrate the arrival of the new century. The name was changed later to simply “Dos Equis” (two exes).