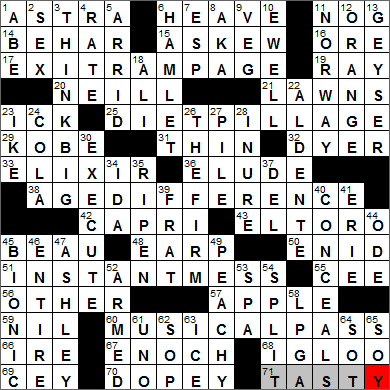 17A. Result of someone yelling “Fire!” in a crowded theater? : EXIT RAMPAGE (exit ramp + age)
25A. Looting of a legislature? : DIET PILLAGE (diet pill + age)
51A. What an exploding microwave can make? : INSTANT MESS (instant message – age)
60A. Exemption from playing an instrument at school? : MUSICAL PASS (musical passage – age)

Today’s Wiki-est, Amazonian Googlies
Across
1. “Per aspera ad ___” : ASTRA
“Per aspera ad astra” is a Latin phrase usually translated as “a rough road leads to the stars”.

11. Creamy concoction : NOG
It’s not really clear where the term “nog” comes from although it might derive from the word “noggin”, which was originally a small wooden cup that was long associated with alcoholic drinks.

16. Magnetite or cinnabar : ORE
Iron ore comes in a number of different forms, like magnetite (the most magnetic of all minerals) and hematite (the most commonly exploited iron ore).

Cinnabar is the ore from which mercury is extracted.

20. Sam of “Jurassic Park” : NEILL
Sam Neill is a very talented actor from New Zealand. I really enjoyed Neill in a 1983 television miniseries about a British spy operation during WWI. He is perhaps better-known for his roles in the movies “Omen III”, “Dead Calm”, “Jurassic Park” and “The Hunt for Red October”.

“Jurassic Park” is a 1990 novel by Michael Crichton, adapted into a hugely successful movie by Steven Spielberg in 1993. One of the main premises of the novel is that dinosaur DNA could be harvested from mosquitoes trapped in amber (fossilized tree resin), the DNA coming from the dinosaur blood consumed by the mosquitoes. The dinosaur DNA is then sequenced and used to create clones of the original beasts. A clever idea, but apparently not very practical from what I’ve read …

25. Looting of a legislature? : DIET PILLAGE (diet pill + age)
The Imperial Diet was a general assembly of the estates of the former Holy Roman Empire. The most famous of these assemblies was the Diet of Worms, a 16th-century meeting that took place in the small town of Worms on the Rhine River in Germany. The main item on the agenda was discussion of the 95 theses of Martin Luther. Luther was summoned to the meeting and found to be guilty of heresy.

29. Laker legend Bryant : KOBE
Kobe Bryant plays basketball for the LA Lakers. Kobe Bryant got his name from a menu would you believe? His parents were in a Japanese restaurant and liked the name of “Kobe” beef, the beef that comes from the area around the city of Kobe on the island of Honshu in Japan.

33. Drink that cures all ills : ELIXIR
An elixir is a solution of alcohol and water that is used to deliver a medicine. The term “elixir” can also be used to mean a medicine that has the power to cure all ills.

42. Blue Grotto locale : CAPRI
The island of Capri off the coast of Southern Italy has been a tourist resort since the days of ancient Rome. Capri is home to the famous Blue Grotto, a sea cave that is illuminated with sunlight that’s colored blue as it passes through the seawater into the cave.

43. Spanish charger : EL TORO
In Spanish, the bull (el toro) might be charging at a bullfight.

45. Belle’s caller : BEAU
A beau is the boyfriend of a belle, a young lady.

48. O.K. Corral lawman : EARP
The famous Earp brothers of the Wild West were Wyatt, Virgil and Morgan. All three brothers participated in what has to be the most celebrated gunfight in the history of the Old West, the Gunfight at the O.K. Corral in Tombstone, Arizona. Strangely enough, the fight didn’t happen at the O.K. Corral, but took place six doors down the street in a vacant lot next to a photography studio.

50. “Idylls of the King” woman : ENID
“Idylls of the King” is a cycle of twelve poems by Alfred, Lord Tennyson that retells the tale of King Arthur. One of the “idylls” is the story of Geraint and Enid. Tennyson’s Enid gave her name to the city of Enid, Oklahoma.

66. Dander : IRE
The phrases “to get one’s Irish up” and “to get one’s dander up” mean to get riled up, to get angry. I guess we are always picking on the poor Irish!

69. Six-time All-Star Ron : CEY
Ron Cey played third base for the Dodgers, the Cubs and the As.

Down
1. Five simoleons : ABE
The US five-dollar bill is often called an “Abe”, as President Lincoln’s portrait is on the front.

“Simoleon” is a slang term for a dollar that dates back to the late 1800s. No one seems to sure where the term originated.

5. Secret alternative : ARRID
Arrid is an antiperspirant deodorant brand introduced in the thirties. Slogans associated with Arrid have been “Don’t be half-safe – use Arrid to be sure”, “Stress stinks! Arrid works!” and “Get a little closer”.

Secret is an antiperspirant/deodorant made by Procter & Gamble, first introduced in 1956 as a cream that was applied with the fingers (ick!). There followed a roll-on version in 1958, a spray in 1964 and the solid stick in 1978.

6. Source of the saying “Brevity is the soul of wit” : HAMLET
“Hamlet” is William Shakespeare’s longest play, and was also one of most popular of the playwright’s works during his lifetime.

8. Letters between names : AKA
Also known as (aka)

10. Tom of “The Seven Year Itch” : EWELL
“The Seven Year Itch” is a 1955 movie by Billy Wilder, based on a stage play of the same name by George Axelrod. “The Seven Year Itch” stars Marilyn Monroe, and Tom Ewell as the guy with “the itch”. Perhaps the most famous scene in the film is the one with Monroe standing over a subway grate allowing the updraft to billow the skirt of her white dress above her knees. The manoeuvre was meant to cool her down, but I think it had the opposite effect on some in the audience! The phrase “seven year itch” had been used by psychologists to describe declining interest in staying monogamous after seven years of marriage.

11. Winter Olympics powerhouse : NORWAY
Norway has been ranked as the country in the world with the highest standard of living almost every year since 2001. Norway is rich in natural resources and has a relatively low population. The people benefit from a comprehensive social security system, subsidized higher education for all citizens and universal health care. And Norway is famous for her success at the Winter Olympic Games, having won more gold medals than any other nation in the world.

12. County name in California, Florida and New York : ORANGE
Orange County in the Greater Los Angeles Area is the smallest county in Southern California, yet is the sixth most populous county in the US. The county seat is Santa Ana.

Orange County, Florida is in the center of the state. The name was changed from Mosquito County to the more friendly Orange County in honor of the county’s main product.

Orange County, New York is in the southern part of the state. The county was named in honor of William III of Orange when it was established in 1683.

13. One blowing off steam : GEYSER
The Great Geysir in Iceland is the first known geyser to have been discovered and documented. The name “Geysir” comes from the Icelandic and Old Norse word “geysa” meaning “to gush”. It is the Great Geysir that gives us our English word “geyser”.

22. Pasta preference : AL DENTE
The Italian expression “al dente” literally means “to the tooth” or “to the bite” and is used to describe not only pasta, but also vegetables that are cooked so that they are tender yet still crisp.

23. Onetime White House nickname : IKE
When the future president was growing up, the Eisenhower family used the nickname “Ike” for all seven boys in the family, as “Ike” was seen as an abbreviation for the family name. “Big Ike” was Edgar, the second oldest boy. “Little/Young Ike” was Dwight, who was the third son born. Dwight had no sisters.

26. 1993 Tom Cruise legal thriller : THE FIRM
“The Firm” is the book that brought John Grisham his first success, although it was the second novel that he wrote. The first was “A Time to Kill”, which garnered a lot more attention after “The Firm” took off. Personally, my favorite of his novels is “Runaway Jury”. “The Firm” was made into a 1993 film with Tom Cruise playing the lead. The film didn’t deliver as well as the book, I thought …

Tom Cruise’s real name is Tom Cruise Mapother IV. Cruise was born in Syracuse, New York, which is one of my favorite cities in the US, because that’s where I met my wife-to-be …

37. Corona ___ Mar, Calif. : DEL
Corona del Mar is a town in the city of Newport Beach, California. “Corona del Mar” translates from Spanish as “Crown of the Sea”.

44. Ben Jonson wrote one “to Himself” : ODE
Ben Jonson was a contemporary of William Shakespeare, and just like Shakespeare, Jonson was a dramatist, poet and actor. Jonson’s work was very well received from 1605 to 1620, but his reputation began to wane in the 1620s. He wrote a play called “The New Inn” which was received so badly, the actors were hissed off the stage. Immediately afterwards, Jonson wrote about the failure in his poem “Ode to Himself”.

54. Bowler’s woe : SPLIT
Bowling has been around for an awfully long time. The oldest known reference to the game is in Egypt, where pins and balls were found in an ancient tomb that is over 5,000 years old. The first form of the game to come to America was nine-pin bowling, which had been very popular in Europe for centuries. In 1841 in Connecticut, nine-pin bowling was banned due to its association with gambling. Supposedly, an additional pin was added to get around the ban, and ten-pin bowling was born.

58. Women drivers’ grp. : LPGA
The Ladies Professional Golf Association (LPGA) was founded in 1950 by a group of 13 lady golfers, and today it is the oldest ongoing women’s sports professional organization in the US.

61. Colorful card game : UNO
In my youth I remember being taught a great card game, by a German acquaintance of mine, called Mau Mau. Years later I discovered that Uno is basically the same game, but played with a purpose-printed deck instead of the regular deck of playing cards that’s used for Mau Mau. I hear that Mau Mau is derived from the game called Crazy Eights.

64. Bar fixture : SOT
Our word “sot” comes from the Old English “sott”, meaning a fool. The word “sot” started to be associated with alcohol and not just foolery in the late 1500s.

65. ___ milk : SOY
What are known as soybeans here in the US are called “soya beans” in most other English-speaking countries. So, I drink soy milk here in America, but when I am over in Ireland I drink “soya milk”.