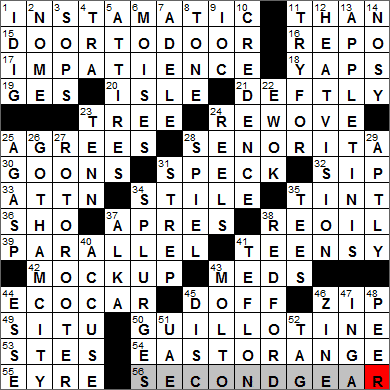 Today’s Wiki-est, Amazonian Googlies
Across
1. Old easy-to-load shooter : INSTAMATIC
Kodak introduced its line of Instamatic cameras in 1963. Instamatics were so easy to use that the term is erroneously applied sometimes today to any point-and-shoot camera.

19. Some fridges : GES
The General Electric Company is usually referred to simply as “GE”. One of the precursor companies to GE was Edison General Electric, founded in 1890 by the inventor Thomas Edison. What we know today as GE was formed two years later when Edison merged his company with Charles Coffin’s Thomson-Houston Electric Company. In 1896, GE was selected as one of the 12 companies listed on the newly formed Dow Jones Industrial Average. GE is the only one of the original 12 that is still on that list. I spent over ten years with GE at the beginning of my working career, and in fact it was GE that asked me to transfer to the US back in the 1980s …

20. Dot in an atlas : ISLE
The famous Flemish geographer Gerardus Mercator published his first collection of maps in 1578. Mercator’s collection contained a frontispiece with an image of Atlas the Titan from Greek mythology holding up the world on his shoulders. That image gave us our term “atlas”.

23. Home of some frogs : TREE
Tree frogs are quite simply species of frogs that spent much of their lives in trees. Tree frogs are usually very small, as they have to be light enough to jump from branch to branch.

28. Miss swinging at a piñata? : SENORITA
Piñatas originated in Mexico, probably among the Aztecs or Mayans. Today piñatas are usually made from cardboard that is brightly decorated with papier-mâché. Traditionally a piñata was made out of a clay pot, adorned with feathers and ribbons and filled with small treasures. During religious ceremonies the clay pots would be suspended and broken open so that the contents would spill out onto the ground at the feet of a god as an offering.

30. Thugs : GOONS
The handheld weapon known as a garrote (or garotte) was in particular used by murders and robbers harassing travelers in India. These felons were known locally as “thuggees” (from the Hindi word for “thief”). This gave us our contemporary word “thug”, meaning a brute.

36. It airs episodes of “Episodes,” briefly : SHO
“Episodes” is a sitcom aired by Showtime in the US and the BBC in the UK. It is a British/American production about a British husband-and-wife comedy writing team who work in Hollywood. One of the stars of the show is Matt LeBlanc, playing himself.

Small breeds of poultry might be known as bantam breeds. European sailors found smaller fowl in Southeast Asia that they referred to as “bantam”, using the name of Bantam, an old Indonesian seaport.

45. Lift in greeting : DOFF
One doffs one’s hat, usually as a mark of respect. To doff is to take off, with “doff” being a contraction of “do off”. The opposite of “doff” is “don”.

46. City and state follower : ZIP
ZIP codes were introduced in 1963. The acronym ZIP stands for Zone Improvement Plan, a name indicating that mail travels more efficiently when the codes are included in the postal address.

49. Nero’s position? : SITU
“In situ” is a Latin phrase meaning “in the place”, and we use the term to mean “in the original position”.

The emperor Nero had quite the family life. When Nero was just 16-years-old he married his stepsister, Claudia Octavia. He also had his mother and step-brother executed.

50. “A Tale of Two Cities” ender? : GUILLOTINE
The guillotine is a device for executing people by decapitating them. The guillotine is most associated with France where it was used most notably and extensively during the French Revolution. The guillotine was used as the standard method of execution in France right up until 1981 when capital punishment was finally abolished.

54. Where the Garden State Parkway meets I-280 : EAST ORANGE
East Orange, New Jersey is a suburb of Newark. The list of famous former residents includes Whitney Houston (as a girl) and Janis Ian (also as a girl).

55. Lake ___ (largest lake in Australia) : EYRE
Lake Eyre is located in the deserts of central Australia. At 49 feet below sea level, Lake Eyre is the lowest point in the whole country.

Down
2. Norton Sound port : NOME
The town of Nome lies on the northern edge of the Norton Sound, an inlet of the Bering Sea in Alaska. Norton Sound was named by Captain James Cook in 1778, in honor of Sir Fletcher Norton who was Speaker of the British House of Commons at that time.

3. Concessions : SOPS
Cerberus is a dog with three heads that appears in both Greek and Roman mythology. Cerberus had the job of guarding the gates of Hades and preventing those who had crossed the River Styx from ever escaping. A sop is a piece of food that has been dipped in some liquid, as one might sop a piece of bread in soup. There is an idiomatic expression, “to give a sop to Cerberus”, which means to give someone a bribe, or pay someone off. The idea is that if one could bribe Cerberus, give him a sop to eat, then he would let you pass and escape from Hades.

6. Nephew of Matty and Jesus : MOISES
Jesus Alou played major league baseball, as did his brothers Matty and Felipe, and as does Felipe’s son, Moises.

7. She released “21” in 2011 : ADELE
The English singer Adele Adkins goes by the stage name “Adele”. Adele describes her musical style as “heartbroken soul”. Not too long ago, Adele wrote and performed the theme song for the latest James Bond film, “Skyfall”.

9. It oversees a major production every two yrs. : IOC
The International Olympic Committee (IOC) was founded in 1894, and has its headquarters in Lausanne, Switzerland.

12. One of Superman’s powers : HEAT VISION
Apparently Superman has the power to emit solar energy from his eyes, so called Heat Vision.

13. Cosmo alternatives : APPLETINIS
An appletini is an apple martini, a cocktail containing vodka and an apple-flavored beverage such as apple brandy. One recipe is:

Like so many famous cocktails, the actual origins of the cosmopolitan are disputed. It is a nice drink though. One of the standard recipes is 4 parts citrus vodka, 1.5 parts Cointreau, 1.5 parts lime juice and 3 parts cranberry juice.

22. Battle of Endor combatant : EWOK
The Ewoks are creatures who live on the moon of Endor, first appearing in “Star Wars Episode VI: Return of the Jedi”. They’re the cute and cuddly little guys that look like teddy bears.

23. Andrew Johnson’s home: Abbr. : TENN
Andrew Johnson was the 17th President of the US, the man who came to power after the assassination of President Lincoln. As well as being Lincoln’s successor, Johnson is remembered as the first sitting president to be impeached. Johnson fell foul of the so-called “Radical Republicans” due to his efforts to quickly incorporate the southern states back into the Union. His political opponents chose the Tenure of Office Act as their “weapon” for impeachment. The Act prevented a president from removing an appointee of a past-president without the consent of the Senate. Johnson had removed the sitting Secretary of War without consulting Congress creating the opportunity for an impeachment trial in Congress. He was acquitted though, as his opponents fell one vote shy of the majority needed. The impeachment of President Johnson was the only presidential impeachment until that of President Clinton in 1999.

24. Rocks from socks : REELS
One might reel, rock back on one’s heels, after getting socked.

26. Penguin’s habitat? : GOTHAM CITY
Gotham had been a nickname for New York City long before it was picked up by comic books as a setting for Batman tales. The term was coined by Washington Irving in a periodical that he published in 1807. Irving was lampooning New York politics and culture, and lifted the name from the village of Gotham in Nottinghamshire, England. The original Gotham was, according to folklore, inhabited by fools.

The Penguin is an enemy of Batman in the comic book series and its spinoffs. The villain first appeared in 1941 and was inspired by the advertising mascot of Kool cigarettes at that time, a penguin with a hat and cane. Famously, the Penguin was played by Burgess Meredith in “Batman” TV series in the 1960s. The character was also portrayed by Danny DeVito in the 1992 film “Batman Returns”.

27. Line opener : ROTO-ROOTER
The “Roto-Rooter” is an invention of Samuel Oscar Blanc. Blanc came up with the idea in 1933 after having to deal with a sewer line in his son’s apartment that was blocked with roots from a tree, a common problem. He put together his first version of the device using a washing machine motor, roller skate wheels and a steel cable. The “rotating rooter” snaked down the sewer line, and rotating blades at the tip of the cable cut through the troublesome roots. Blanc sold his machine for decades to people who set up their own drain clearing businesses. In 1980 the Blanc family sold the Roto-Rooter company to a Cincinnati concern that started buying up independent franchises that used the Roto-Rooter to create the national service with which we are familiar today. Oh, and my advice is, save yourself the cost of the service call and just rent a machine. That’s what I do …

28. Series of selling points : SPIEL
A spiel is a lengthy speech or argument designed to persuade, like a sales pitch. “Spiel” comes to us from German, either directly (“spiel” is the German for “play”) or via the Yiddish “shpil”.

31. Winter malady : STREP
Streptococcus bacteria multiply and divide along a single axis so that they form linked chains. That behavior gives the genus of bacteria its name, as “streptos” is Greek for “easily twisted, like a chain”. I had a battle with streptococcal pharyngitis (strep throat) not too long ago and it was not at all pleasant, I must say. Another species of streptococcus is responsible for that terrible “flesh-eating” infection that makes the news from time to time.

38. He starred as Gatsby in 1974 : REDFORD
“The Great Gatsby” is a 1974 film starring Robert Redford and Mia Farrow, an adaptation of the famous F. Scott Fitzgerald novel of the same name. The film had two famous screenwriters. The original script was provided by Truman Capote, and he was replaced by Francis Ford Coppola.

41. Cookware cover : TEFLON
Teflon is a brand name for the polymer called PTFE (polytetrafluoroethylene). Teflon is used as a coating for nonstick pans, a lubricant in machinery and as a graft material in surgery.

43. Very, to Verdi : MOLTO
Giuseppe Verdi was an Italian composer mainly of operas who was active during the Romantic era. Equally as famous as Verdi’s operas, are arias from those operas such as “La donna è mobile” from “Rigoletto”, “The Drinking Song” from “La Traviata” and “The Chorus of the Hebrew Slaves” from “Nabucco”.

The Roman poet Publius Ovidius Naso is today known simply as Ovid. Ovid is usually listed alongside the two other great Roman poets: Horace and Virgil.

46. Fan’s pub : ZINE
A fanzine (also “zine”) is a fan publication with a very limited circulation, dealing with a very specific subject matter. Fanzines are usually desktop published and distributed electronically or as photocopies.

47. Young Frankenstein married her : INGA
I am not really a big fan of movies made by Mel Brooks, but “Young Frankenstein” is the exception. I think the cast has a lot to do with me liking the film, as it includes Gene Wilder (Dr. Frankenstein), Teri Garr (Inga), Marty Feldman (Igor) and Gene Hackman (Harold, the blind man).

51. Fujairah’s locale: Abbr. : UAE
Fujairah is one of the seven emirates that together make up the United Arab Emirates (UAE).