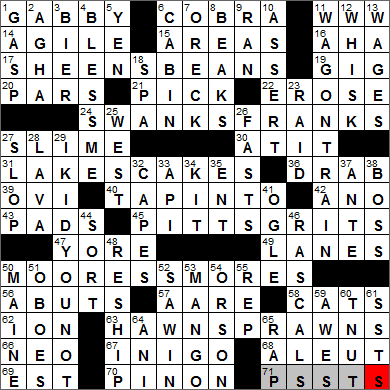 CROSSWORD SETTER: C. W. Stewart
THEME: Food for Actors … each of the themed answer’s is an actor’s family name with a food that rhymes with that name:

Today’s Wiki-est, Amazonian Googlies
Across
6. Snake that a snake charmer charms : COBRA
“Cobra” is the name given to a group of snakes, some of which are in different animal families. The term “cobra” is reserved for those snakes that can expand their neck ribs to create a hood. The name “cobra” is an abbreviated form of “cobra de capello” which translates from Portuguese as “snake with hood”.

Snake charmers don’t actually hypnotize their cobras, but they do train them. The snake is trained to “follow” the movement of end of the pungi, the instrument that the charmer uses in the act. The snake presents no danger to the charmer or the audience, as it is typically defanged or has it’s mouth partially stitched up so that only the tongue can be moved in and out. Not a very nice practice …

11. It follows “//” in a URL : WWW
The World Wide Web was effectively the invention of English computer scientist Tim Berners-Lee. The key to Berner-Lee’s invention was bringing together two technologies that already existed: hypertext and the Internet. I for one am very grateful …

14. Like a limbo champion : AGILE
The limbo dance originated on the island of Trinidad in the Caribbean. The name “limbo” is an alteration of our word “limber”, which isn’t surprising given what one has to do to get under that bar!

17. Actor Charlie’s favorite food? : SHEEN’S BEANS
Charlie Sheen’s real name is Carlos Irwin Estévez, and he is of course the youngest son of actor Martin Sheen. Charlie was the highest paid actor on television in 2010, earning $1.8 million per episode on the sitcom “Two and a Half Men”. Then of course he blew it and got fired from the show amid stories of alcohol and drug abuse and domestic violence. I bet his co-stars were pretty tweaked about the show being cancelled, and pretty happy that it was given a second lease of life …

22. Jagged, as a leaf’s edge : EROSE
An edge that is “erose” is irregularly notched or indented.

24. Actress Hilary’s favorite food? : SWANK’S FRANKS
The actress Hilary Swank had her first major role in “The Next Karate Kid” released in 1994, in which she played the first female student of the sensei Mr. Myagi.

What we call a wiener in this country is known as a Vienna sausage in Germany. It was first produced by a butcher from Frankfurt who was living in Vienna, hence the name “Wiener”, which is German for “of Vienna”. Paradoxically, the same sausage is called a Frankfurter in Vienna, as it was created by someone from Frankfurt. It’s all very confusing …

31. Actress Veronica’s favorite food? : LAKE’S CAKES
The actress Veronica Lake was perhaps best known for playing the femme fatale on the big screen in the forties. She was also known for wearing a “peekaboo” hairstyle in her early movies. The look came about by accident when a stray lock of hair fell over her face during a publicity shoot. The photo was well received, and so Lake adopted her trademark hairstyle. Sadly, Lake’s career fell apart in the fifties, and she arrested for disorderly conduct several times. The Hollywood star was even reduced to working as a barmaid in a New York hotel.

39. Prefix with duct : OVI-
Oviducts are the non-mammalian equivalents of the Fallopian tubes. Eggs travel from the ovaries, along the oviduct (there are usually two oviducts, but sometimes only one) and are released into some other organ or anatomical structure depending on species.

45. Actor Brad’s favorite food? : PITT’S GRITS
Brad Pitt’s first major role was as the cowboy hitchhiker in the 1991’s “Thelma and Louise”. Pitt’s life offscreen garners as much attention as his work onscreen, it seems. The tabloids revel in the series of high-profile relationships in which he has been involved. He was engaged to Gwyneth Paltrow for a while, married to Jennifer Aniston, and he now lives with Angelina Jolie.

50. Actor Dudley’s favorite food? : MOORE’S S’MORES
The comic actor Dudley Moore was perhaps most famous in his homeland of the UK as half of a groundbreaking comedy duo called simply Peter Cook and Dudley Moore. Relatively late in his career, Moore broke into Hollywood with a supporting role in “Foul Play” (1978) and a leading role in “10” (1979) and “Arthur” (1981). Moore was also a highly accomplished piano player and gave many concert performances.

S’mores are a treat peculiar to North America, usually eaten around a campfire. A s’more consists of a roasted marshmallow and a layer of chocolate sandwiched between two graham crackers. The earliest written reference to the recipe is in a 1927 publication called “Tramping and Trailing with the Girl Scouts”. Girl Scouts always did corner the market on cookies and the like!

57. Bern’s river : AARE
The Aar (also called the “Aare” in German) is the longest river entirely in Switzerland. A famous spot along the Aar is the Reichenbach Falls in the center of the country, actually a series of waterfalls near the city of Meiringen. These falls are renowned in the world of literature as it was here that Sherlock Holmes fell to his supposed doom with his nemesis Professor Moriarty (in “The Adventure of the Final Problem”).

Bern (or Berne) is the capital city of Switzerland. The official language of the city is German, but the language most spoken in Bern is a dialect known as Bernese German.

63. Actress Goldie’s favorite food? : HAWN’S PRAWNS
I remember watching the ditsy Goldie Hawn character on “Rowan & Martin’s Laugh-In”. Hawn used to give great performances on the show, convincing everyone that she was the stereotypical dumb blonde. Well, what a career she was to carve out for herself!

70. Attach, as a corsage : PIN ON
“Corsage” is a word we imported from French in the late 15th century. Back then we used it to mean “the size of the body”. By the early 1800s a corsage was a bodice, or the body of a woman’s dress. At the beginning of the 20th century, the French term “bouquet de corsage” was being used for a “bouquet worn on the bodice”, and this has been shortened simply to “corsage”.

Down
2. Turkish title : AGHA
“Aga” (also “agha”) is a title that was used by both civil and military officials in the Ottoman Empire.

3. Funeral stand : BIER
Biers are the special stands on which one rests a coffin for a service, or perhaps if the corpse is to lie in state. A bier may have wheels on it so that it can be used to transport the coffin to the graveside. The original biers were just flat pieces of wood on which the body was placed, covered with a shroud. Nowadays, we place the body in a casket, and then onto the bier.

5. Japanese money : YEN
The Korean Won, the Chinese Yuan, and the Japanese Yen (all of which are Asian currencies) take their names from the Chinese written character that represents “round shape”.

7. Much-advertised vacuum cleaner : ORECK
The Oreck Corporation is named after founder David Oreck and is a manufacturer of vacuum cleaners and air purifiers. The company started out selling vacuum cleaners by mail, a new concept in 1963. David Oreck himself appears regularly as a spokesman in the company’s ads and infomercials.

12. ___ broom : WHISK
A whisk broom is a broom with a short handle that is used to brush clothes. I think that the brush used by a baseball umpire to sweep off home plate is also a whisk broom.

23. Speakeasy owner’s fear : RAID
A speakeasy is an establishment that sells alcoholic drinks illegally. Speakeasies were very big in the US in the days of Prohibition. The obvious etymology, of a speakeasy owner asking his or her customers to “speak easy” so as not to draw attention to the authorities, is thought to have originated in 1888 in McKeesport just outside Pittsburgh.

32. Items worn by Dracula and Superman : CAPES
“Dracula” is a novel written by the Irish author Bram Stoker, and first published in 1897. Dracula wasn’t the first vampire of literature, but he certainly was the one who spawned the popularity of vampires in theater, film and television, and indeed more novels. Personally, I can’t stand vampire fiction …

34. Frontiersman Carson : KIT
Kit Carson was a frontiersman who moved west from Missouri when he was just 16 years old. Kit Carson’s life was immortalized in the novels of John C. Fremont, an explorer who hired Carson as a guide for his travels through California, Oregon and Nevada. Carson later served with the US Army. He is thought to be the only American to have achieved the rank of general without being able to read or write.

50. Augusta’s home : MAINE
As well as being the easternmost US state capital, Augusta, Maine is the third smallest, with a population of under 20,000.

54. Director Welles : ORSON
Orson Welles is perhaps best-remembered in the world of film for his role in 1941’s “Citizen Kane”. In the world of radio, Welles is known for 1938’s famous broadcast of “The War of the Worlds”, a broadcast that convinced many listeners that the Earth was indeed being invaded by aliens.

60. Letter-shaped fastener : T-NUT
A T-nut is so called because it has a t-shape when viewed from the side.

61. Grounded trans-Atlantic fliers, for short : SSTS
The most famous Supersonic Transport (SST) was the Concorde, a plane that’s no longer flying. Concorde had that famous “droop nose”. The nose was moved to the horizontal position during flight to create the optimum aerodynamic shape thereby reducing drag. It was lowered during taxi, takeoff and landing, so that the pilot had better visibility. The need for the droop nose was driven largely by the delta-shaped wings. The delta wing necessitates a higher angle of attack at takeoff and landing than conventional wing designs, so the pilot needed the nose lowered so that he or she could see the ground.

64. Singer DiFranco : ANI
Ani DiFranco is a folk-rock singer and songwriter. DiFranco has also been labeled a “feminist icon”, and in 2006 won the “Woman of Courage Award” from National Organization of Women.

65. Genre for Eazy-E and Heavy D : RAP
Eazy-E was the stage name of rapper Eric Lynn Wright. Eazy-E had a pretty liberal lifestyle, fathering seven children with six different women. In 1995, he died due to complications from AIDS. He was only 32 years old.

Heavy D was the stage name of singer Dwight Myers, a Jamaican-born American rap artist. Heavy D died in 2011 from a pulmonary embolism, at just 44 years of age. He had just taken a flight from Europe back to the US and developed deep vein thrombosis in one of his legs. Part of the clot broke off and traveled to his lung where it killed him. My wife developed deep vein thrombosis from prolonged sitting on a plane some years ago. She is very careful to keep moving around now when she flies, and for good reason …