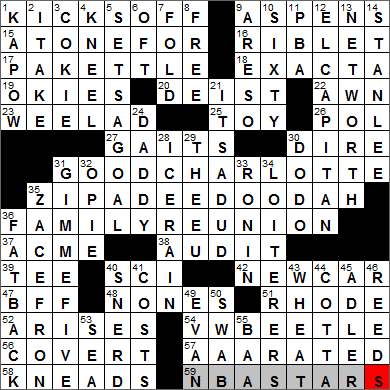 Today’s Wiki-est, Amazonian Googlies
Across
9. Common sights in the Rockies : ASPENS
The “quaking” aspen tree is so called because the structure of the leaves causes them to move easily in the wind, to “tremble”.

17. Half of an old comic film duo : PA KETTLE
The author Betty McDonald wrote a memoir called “The Egg and I” that was published in 1945, telling the story of her life as a young wife on a chicken farm in Washington state. The book was adapted into a film of the same name in 1947, with the lovely Claudette Colbert playing Betty McDonald, and the great Fred MacMurray as her husband. Two other characters feature in the storyline: Ma and Pa Kettle. The latter characters were so well received by theater audiences that a whole series of films about them and their fifteen children was made between the years 1949 and 1957.

18. It includes picking the place : EXACTA
To win a bet called an exacta, the person betting must name the horses that finish first and second and in the exact order. The related bet called the trifecta requires naming of the first, second and third-place finishers in the right order.

19. Woody Guthrie and others : OKIES
Woody Guthrie was a singer-songwriter best known for his recording of the folk song “This Land is Your Land”, the lyrics of which were written by Guthrie himself.

20. Adam Smith or Ethan Allen : DEIST
Deism (from the Latin “deus” meaning god) is the belief that a supreme being created the universe, a belief based on observation and reason and without the need for faith. Further, a deist does not accept divine intervention but rather believes that the supreme being, having created the universe, leaves the world to it own devices.

Adam Smith’s great work in economics is called “The Wealth of Nations”, published in 1776. The book was a big hit within his own lifetime and went a long way to earning him the reputation as the father of modern economics and capitalism. Smith coined the phrase “the invisible hand of the market”, describing his assertion that a marketplace tends to self-regulate.

Ethan Allen was one of the founders of the state of Vermont. Allen was also a hero in the American Revolutionary War, famous for leading (along with Benedict Arnold) the small band of men that captured Fort Ticonderoga. And yes, the Ethan Allan store and furniture line is named for Ethan Allen the patriot.

22. The “needle” part of needle grass : AWN
Awns are hair or bristle-like structures found in numerous species of plants. In some species, like barley, the awns can contain photosynthetic tissue.

26. Party person, for short : POL
A politician (pol.) is usually a member of a political party.

31. Pop punk band with the 2002 triple-platinum album “The Young and the Hopeless” : GOOD CHARLOTTE
Good Charlotte is a rock band from Waldorf, Maryland that formed in 1996. The band creates a bit of a stir offstage in the world of vegetarians. One of the band members was actually named Vegetarian of the Year by PETA a few years ago, and the whole group used to be visible in its support of animal rights. However, in the last couple of years, the Good Charlotte name has become associated with promotions of the Kentucky Fried Restaurant chain of restaurants, leading to some charges of hypocrisy.

37. Top : ACME
The “acme” is the highest point, coming from the Greek word “akme” which has the same meaning.

38. Take without credit : AUDIT
“To audit” is to attend a college course without receiving academic credit.

39. Ball-bearing piece : TEE
A tee is used as a support in a few ball sports, like golf and football.

40. Field of three Nobel Prizes: Abbr. : SCI
The Peace Prize is the most famous of the five prizes bequeathed by Alfred Nobel. The others are for Physics, Chemistry, Physiology or Medicine, and Literature. There is also a Nobel Prize in Economics that is awarded along with the original five, but it is funded separately and is awarded “in memory of Alfred Nobel”. Four of the prizes are awarded by Swedish organizations (Alfred Nobel was a Swede) and so the award ceremonies take place in Stockholm. The Peace Prize is awarded by the Norwegian Nobel Committee, and that award is presented in Oslo.

51. ___ Island : RHODE
Rhode Island is known as the Ocean State, largely because about 14% of the state’s area is made up of ocean bays and inlets.

54. Bug : VW BEETLE
Porsche was founded in 1931 in Stuttgart, Germany by Professor Ferdinand Porsche. The company didn’t produce cars at first, but worked on design and development. The first big job awarded to the company was from the German government, to design a car for the people. The result was the Volkswagen Beetle. Yep, the Beetle is a Porsche design.

Down
1. “Batman” comics sound : KAPOW!
Batman is unique among his superhero compatriots in that he has no special powers, just a whole load of cool gadgets.

3. NPR’s Roberts : COKIE
Cokie Roberts is a great journalist and author, best known for her work with National Public Radio.

4. Request at a palace, maybe : KNEEL
Kneel, and the Queen might “dub thee a knight”, if you’re lucky. “Dub” is a specific term derived from Old English that was used to mean “make a knight”. As the knight was also given a knightly name at the same time, “dub” has come to mean “give someone a name”.

9. Kindergarten comeback : ARE SO!
“Kindergarten” is of course a German term, literally meaning “children’s garden”. The term was coined by the German education authority Friedrich Fröbel in 1837, when he used it as the name for his play and activity institute that he created for young children to use before they headed off to school. His thought was that children should be nourished educationally, like plants in a garden.

10. Babe Ruth mark broken by Roger Maris : SIXTY
Roger Maris (whose real name was Roger Maras) was the son of Croatian immigrants. It was Maris’s single-season record of 61 home runs that Mark McGwire broke in 1998 (hitting 70 that season). Maris’s own record of 61 runs (from 1961) beat the previous record of 60 set in 1927 by Babe Ruth.

A “kegler” is a person who plays ten-pin bowling. “Kegel” is a German word for “bowling pin”.

12. Noted cliff in Yosemite Valley : EL CAPITAN
El Capitan is a stunning vertical rock formation in Yosemite National Park in California. The top of El Capitan has been used as the take-off point for many BASE jumps, parachute jumps made by diving off the top of the rock face. The National Park Service put a stop to the practise in 1999. Soon after, a BASE jumper made an illegal jump to protest the ban. She died …

14. Frequent Jack Kirby comics collaborator : STAN LEE
As writers for the comic book industry, Jack Kirby and Stan Lee worked together a lot throughout the 1960s. The Kirby-Lee team created such icons as the Fantastic Four, the X-Men and the Hulk.

29. Grp. whose flag has 12 stars : THE EU
The Flag of Europe is a circle of twelve gold stars against a blue background. The number of stars used was the subject of much political debate at the time of the flag’s design in the 1950s, when it was adopted as the flag of the Council of Europe. Attempts to have the number of stars represent the number of states in Europe were unsuccessful as the recognition of certain states was in dispute. Eventually the number 12 was chosen as a compromise, a number with no political relevance but with connotations of perfection and completeness.

30. Awarder of a thimble to Alice, in “Alice’s Adventures in Wonderland” : DODO
The Dodo is a character who appears early in Lewis Carroll’s novel “Alice’s Adventures in Wonderland”. Some people believe that the Dodo is a representation of the author himself, as the Dodo has a stammer and introduces himself in the storyline as “Do-do-dodgson”. Lewis Carroll’s real name was Charles Lutwidge Dodgson, hence the claims that the Dodo represents the author.

31. “Up top!” : GIMME FIVE!
The celebratory gesture that we call a “high five” is said to have been invented by former baseball players Dusty Baker and Glenn Burke when they were both playing for the Los Angeles Dodgers in the later 1970s.

32. Anthony’s XM Radio partner : OPIE
“The Opie & Anthony Show” is a talk show broadcast on XM and Sirius satellite radio. Hosts of the show are Opie Hughes and Anthony Cumia. I’ve turned into a bit of grouch in my old age, and I must admit that I find broadcasts like “The Opie & Anthony Show” very puerile and offensive. Past features in the show include “Whip ‘em Out Wednesdays”, “Voyeur Bus” and “T&A with O&A”. You get the idea …

33. Samurai who’s lost his lord : RONIN
In feudal Japan, a samurai who lost his master, perhaps through death or loss of favor, was known as a ronin. The term “ronin” is also used in contemporary Japan for a salaried worker between jobs.

“High School Musical” is a 2006 Disney film made for television that spawned two sequels released to movie theaters worldwide. The soundtrack to “High School Musical” ended up being the best-selling album for 2006. Apparently the storyline is based on Shakespeare’s “Romeo and Juliet”.

45. Pioneer in psychoanalysis : ADLER
Alfred Adler was one of the group of medical professionals who founded the psychoanalytic movement. Today Adler is less famous than his colleague, Sigmund Freud, also one of the founders of psychoanalysis.

49. “___ Almighty” (2007 film) : EVAN
Steve Carell’s movie “Evan Almighty” was actually a sequel, to Jim Carrey’s “Bruce Almighty”. “Evan Almighty” is a cute enough film, with Evan mutating into a Noah character who goes as far as building an ark in his front yard.