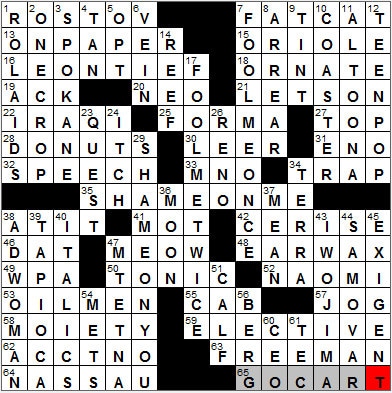 CROSSWORD SETTER: Michael Shteyman
THEME: Fool Me … there is a saying included in today’s grid:

Today’s Wiki-est, Amazonian Googlies
Across
1. ___-on-Don, Russian port of 1+ million : ROSTOV
Rostov-on-Don is a port city in Russia that lies on the River Don, 32 miles inland from the Sea of Azov. The port city should not be confused with the town of Rostov, one of the oldest towns in Russia and a major tourist destination.

15. Maryland state symbol : ORIOLE
The Baltimore Oriole is a small blackbird. It is the state bird of Maryland, and of course gives its name to the Baltimore Major League Baseball team.

16. Wassily ___, Russian-American Nobelist in Economics : LEONTIEF
Wassily Leontief was an American economist born in Germany and educated in the former Soviet Union. Leontief was awarded the Nobel Prize for Economics in 1973. I am sure that Leontief was quite proud of three of his doctoral students who were also awarded the same prize for their own work.

18. Like the Kremlin : ORNATE
I was lucky enough to visit the Moscow Kremlin as a tourist a few years ago. The Kremlin of course sits right on Red Square, along with Saint Basil’s Cathedral and the famed GUM department store. “Kremlin” is a Russian word for “fortress”.

20. Conservative leader? : NEO-
By definition, a neoconservative supports the use of American power and military to bring democracy, liberty, equality and human rights to other countries.

22. Nouri al-Maliki, for one : IRAQI
Nouri al-Maliki is the Prime Minister of Iraq. Nouri al-Maliki had fled his native Iraq in 1979 after the Saddam Hussein regime discovered that he was a member of an outlawed political movement. He continued to work for his cause as an exile, from Syria and Iran, until he was able to return home after the invasion of Iraq in 2003. al-Maliki was installed as the country’s second, post-war Prime Minister in 2006.

25. Pro ___ : FORMA
The Latin term “pro forma” translates as “as a matter of form”, and is used in English to describe actions or documents that are considered merely a formality.

31. “Third Uncle” singer : ENO
Brian Eno started out his musical career with Roxy Music. However, Eno’s most oft-played composition (by far!) is Microsoft’s “start-up jingle”, the 6-second sound you hear when the Windows operating system is booting up.

41. Dictionnaire entry : MOT
In France, one might look up a word (mot) in the dictionary (dictionnaire).

48. Cerumen : EARWAX
“Cerumen” is the medical term for earwax. I’ve just been reading about some of the historical uses for earwax. However, I can’t bring myself to record then here, as each is more disgusting that the next …

49. “For hire” org. of the 1930s : WPA
The Work Progress Administration (WPA) was the largest of the New Deal agencies. The WPA employed millions of people during the Depression, putting them to work on various public works projects. The total spending through the WPA from 1936 to 1939 was nearly $7 billion.

52. Watts in a film projector? : NAOMI
Naomi Watts was born in the UK and moved to Australia when she was 14 years of age. It was in Australia that Watts got her break in television and movies. Probably her most acclaimed role was in the 2003 film “21 Grams” with Sean Penn and Benicio del Toro. Watts is best friends with fellow Australian actress Nicole Kidman.

58. Half : MOIETY
A “moiety” is a “half”, a word that made it’s way into English via Old French from the Latin “medius” meaning “middle”.

63. Mandela portrayer in “Invictus,” 2009 : FREEMAN
The wonderful actor Morgan Freeman is from Memphis, Tennessee. When I think of all of Freeman’s great performances, two stand out for me: the chauffeur Hoke Colburn in 1989’s “Driving Miss Daisy”, and Nelson Mandela in 2009’s “Invictus”.

64. Long Island county : NASSAU
Nassau County on Long Island, New York is so called as Long Island used to have the name “Nassau”. The Dutch gave it that name in honor of Price William of Nassau, Prince of Orange, later to be King William III of England. The county’s colors are orange and blue, the colors of the House of Orange.

Down
1. Product whose commercials ran for a spell on TV? : ROLAIDS
The Rolaids brand of antacid was invented in the late twenties. The “Rolaids” name came from the fact that original packing was a foil “roll”.

3. Expo ’74 locale : SPOKANE
Back in 1974, Spokane in Washington was the smallest city ever to host a World’s Fair. The theme of the fare was “the environment”, which I suppose was ahead of its time. Notably, Expo ’74 was the first American-hosted World’s Fair attended by the Soviet Union after WWII.

11. City in the Alleghenies : ALTOONA
Altoona is in central Pennsylvania, and is home to the Ivyside Park Campus of Pennsylvania State University.

12. Justin Bieber’s genre : TEEN POP
I saw Justin Bieber on television a while back for the first time, and boy do I feel old. This heartthrob from Canada was born in 1994(!), and he is recording hit after hit. Me, I’ll stick with the Beatles …

26. Silver State city : RENO
Reno, Nevada was named in honor of Major General Jesse Lee Reno, a Union officer killed in the Civil War. The city has a famous “Reno Arch”, a structure that stands over the main street. The arch was erected in 1926 to promote an exposition planned for the following year. After the expo, the city council decided to keep the arch and held a competition to decide what wording should be displayed, and the winner was “The Biggest Little City in the World”.

36. Create an open-ended view? : MOON
The first recorded mooning incident took place in 66 AD, during the First Roman-Jewish War. Roman soldiers decided to moon Jewish pilgrims as they traveled to the Jewish Temple in Jerusalem.

39. Pudding thickener : TAPIOCA
The cassava plant is a woody shrub native to South America grown largely for its carbohydrate-rich tubers. In fact, the cassava is the third largest food source of carbohydrates (for humans) in the world. Ordinarily, the carbohydrate is extracted from the plant, dried as flour and is called tapioca.

43. Setting for Clint Eastwood’s “Flags of Our Fathers” : IWO JIMA
Iwo Jima today is an uninhabited volcanic island located south of Tokyo. There were about a thousand Japanese civilians living on the island prior to WWII. In 1944, there was a massive influx of Japanese military personnel in anticipation of the inevitable US invasion. As the Japanese military moved in, the civilians were forced out and no one has lived there ever since.

44. Russian urn : SAMOVAR
The samovar originated in Russia, and is often a very elegant water boiler, usually for making tea. As such, there is often an attachment on top to keep a teapot warm.

45. Urgent : EXIGENT
Something exigent is urgent, coming from the Latin “exigentia” meaning “urgency”.

47. Italian tourist attraction, in brief : MT ETNA
Mt. Etna is the largest of three active volcanoes in Italy. Mt Etna is about 2 1/2 times the height of its equally famous sister, Mt. Vesuvius.

54. Team that got a new ballpark in 2009 : METS
Citi Field is the new baseball stadium used by the New York Mets. It sits right next door to Shea stadium, where the Mets had played for decades. And the name of course comes from sponsor Citigroup.

61. Sleuth, informally : TEC
“Tec” is slang for a private detective.