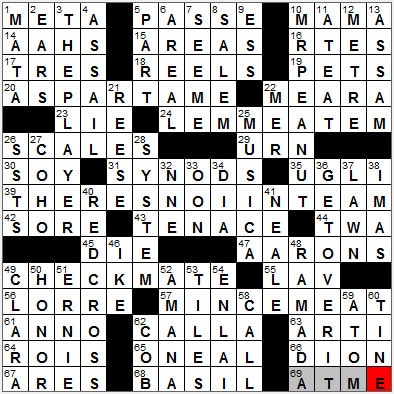 Today’s Wiki-est, Amazonian Googlies
Across
1. *Prefix with physics : (META)-
The word “metaphysics” comes from the Greek “meta” (beyond) and “physika” (physical), and is a branch of philosophy that investigates reality beyond the principles of science. Not something I would understand …

20. *Substance marketed under the name NutraSweet : ASPAR(TAME)
NutraSweet is a brand name for the artificial sweetener aspartame. Aspartame was discovered by a chemist working for Searle in 1965, but it took 15 years for the company to be granted approval for its sale. I wonder why …???

22. Stiller’s partner in comedy : MEARA
Anne Meara has been married to fellow comedic actor Ben Stiller since 1954. Anne and Ben are the parents of actors Ben and Amy Stiller.

26. Libra’s symbol : SCALES
The constellation of Libra is named for the scales held by the goddess of justice. Libra is the only sign of the zodiac that isn’t named for a living creature.

31. Religious councils : SYNODS
The word synod comes from the Greek word for assembly, or meeting. A synod is a church council, usually in the Christian faith.

35. Aptly named fruit : UGLI
The ugli fruit is a hybrid of an orange and a tangerine and was first discovered growing wild in Jamaica where most ugli fruit comes from today.

43. Bridge player’s combo : TENACE
In the wonderful card game of bridge, a tenace is a broken sequence of honor cards, like AQ or KJ.

44. Bygone flier : TWA
Trans World Airlines (TWA) was a big carrier in the US, but was perhaps even more recognized for its extensive presence in Europe and the Middle East. For many years, especially after the collapse of Pan-Am, TWA was considered the unofficial flag carrier for the US. The company started in 1930, the product of a forced merger of Transcontinental Air Transport and Western Air Express. The Transcontinental and Western Air that resulted (the original meaning of the acronym TWA) was what the Postmaster General wanted, a bigger airline to which the Postal Service could award airmail contracts.

47. ___ rod (molding with a twined serpent design) : AARON’S
In the world of architecture, an Aaron’s rod is a rod-shaped molding that includes a design of scrolls, leaves or perhaps a twined serpent. The design is name for the mystical rod of Aaron, brother of Moses. In the Biblical account, Aaron casts down his rod/staff to the ground and it turns into a serpent.

49. *Chess ending : CHECK(MATE)
In the game of chess, when the king is under immediate threat of capture, it is said to be “in check”. If the king cannot escape from check, then the game ends in “checkmate” and the player in check loses. In the original Sanskrit game of chess, the king could actually be captured. Then a rule was introduced requiring that a warning be given if capture was imminent (today we announce “check!”) so that an accidental, early ending to the game doesn’t occur.

55. Loo : LAV
When I was growing up in Ireland, a “bathroom” was a room that had a bath and no toilet. The separate room with the commode was called “the toilet” or sometimes the W.C. (the water closet). Apparently the term closet was used because in the 1800s when homeowners started installing toilets indoors they often displaced clothes in a “closet”, as a closet was the right size to take the commode. It has been suggested that the British term “loo” comes from Waterloo (water-closet … water-loo), but no one seems to know for sure.

56. Peter of “Casablanca” : LORRE
Signor Ugarte is a wonderful character in the classic film “Casablanca”. Ugarte is played by Peter Lorre, and is the man who has possession of the crucial letters of transit that were obtained by murdering two German couriers.

61. The “A” in A.D. : ANNO
The designations Anno Domini (AD, “year of Our Lord”) and Before Christ (BC) are found in the Julian and Gregorian calendars. The dividing point between AD and BC is the year of the conception of Jesus, with AD 1 following 1 BC without a year “0” in between. The AD/BC scheme dates back to AD 525, and gained wide acceptance soon after AD 800. Nowadays a modified version has become popular, with CE (Common/Christian Era) used to replace AD, and BCE (Before the Common/Christian Era) used to replace BC.

62. ___ lily : CALLA
The Calla Lily is a common name for a lily of the genus Zantedeschia. There is a lily genus called Calla, but the Calla Lily isn’t in it. Now that, that is confusing …

65. Shaquille of the N.B.A. : O’NEAL
Shaquille O’Neal is one of the heaviest players ever to have played in the NBA (weighing in at around 325 pounds). Yep, he’s a big guy … 7 foot 1 inch. He is also the oldest player active in the NBA today, pushing 40 years old.

66. Singer Celine : DION
French-Canadienne singer Celine Dion first came to international attention when she won the 1988 Eurovision Song Contest, representing Switzerland in the competition that was hosted in Dublin, Ireland.

67. Greek war god : ARES
In Greek mythology the god Ares was the half-brother of the goddess Athena, although the two were regarded as enemies. Both deities are associated with war, with Athena representing strategic warfare whereas Ares is linked to momentary, passionate violence.

68. Pesto ingredient : BASIL
The term “pesto” applies to anything made by pounding. What we tend to know as “pesto” sauce is more properly called “pesto alla genovese”, pesto from Genoa in northern Italy.

Down
1. ___ Hari (W.W. I spy) : MATA
Mata Hari was the stage name used by Margaretha Geertuida Zella, born in the Netherlands in 1876. After an unsuccessful and somewhat tragic marriage, Zella moved to Paris in 1903 where she struggled to make a living. By 1905 she was working as an exotic dancer and using the name Mata Hari. She was a successful courtesan, notably moving in various circles of high-ranking military officers. She apparently worked as a double agent, both for the French and the Germans. When Mata Hari was accused by the French of passing information to the enemy, she was tried, found guilty and executed by firing squad at the height of WW1 in 1917.

3. 1992 Robert Altman film about Hollywood : THE PLAYER
“The Player” is a 1992 satirical movie directed by Robert Altman all about life in Hollywood. The film is noted for about 60 cameo appearances by Hollywood celebrities, most of whom received no compensation. There is also a famous opening shot, a shot that lasts for 7 minutes and 47 seconds without a camera break.

8. Oregon’s capital : SALEM
Salem is the state capital of Oregon. It is thought that the city takes its name from the older city of Salem, Massachusetts.

10. Advertising figure with a monocle : MR PEANUT
Planters is the company with the Mr. Peanut icon. Mr. Peanut was the invention of a first-grader called Antonio Gentile, a young man who won a design contest in 1916. A remarkable legacy, I’d say …

13. Source of much tea from Asia : ASSAM
Assam is a state in the very northeast of India, just south of the Himalayas. Assam is noted for its tea, as well as its silk.

21. Actress Witherspoon : REESE
Reese is not actually Ms. Witherspoon’s given name. She started out life as Laura Jeanne Witherspoon. Reese is her mother’s maiden name.

22. Debussy’s “La ___” : MER
“La Mer” is a lovely group of three symphonic sketches for orchestra by the French composer Claude Debussy. Listen to it, and you can feel yourself at the ocean. “La Mer” is French for “The Sea”.

26. Retired fliers : SSTS
The most famous Supersonic Transport (SST) was the Concorde, a plane that’s no longer flying. Concorde had that famous “droop nose”. The nose was moved to the horizontal position during flight to create the optimum aerodynamic shape thereby reducing drag. It was lowered during taxi, takeoff and landing, so that the pilot had better visibility. The need for the droop nose was driven largely by the delta-shaped wings. The delta wing necessitates a higher angle of attack at takeoff and landing than conventional wing designs, so the pilot needed the nose lowered so that he or she could see the ground.

27. Pacific salmon : COHO
The Coho salmon is silver along the side of its body, but only during the phase of its life while it is in the ocean. When spawning and heading up into a freshwater river, the Coho has bright red sides.

28. The “S” in CBS : SYSTEM
CBS used to be called the Columbia Broadcasting System.

34. Sábado or domingo : DIA
In Spain, the day (dia) might be Saturday (Sábado) or Sunday (domingo).

40. Blood group? : RED CROSS
Back in 1859, a Swiss businessman called Henry Dunant went to meet French emperor Napoleon III, to discuss making it easier to conduct commerce in French-occupied Algeria. The Emperor was billeted at Solferino, where France and Austria were engaged in a major battle. In one day, Dunant witnessed 40,000 soldiers die in battle, and countless wounded suffering on the battlefield without any organized medical care. Dunant abandoned his business agenda and instead spent a week caring for the sick and wounded. Within a few years he had founded the precursor to the Red Cross, and in 1901 was awarded the first ever Nobel Peace Prize.

41. Writer Zora ___ Hurston : NEALE
Zora Neale Hurston was an American author, most famous for her 1937 novel “Their Eyes Were Watching God”. Like the author, the main character in the novel is an African American woman, a part played by Halle Berry in a television movie adaptation that first aired in 2005.

46. “I Like ___” (’50s political slogan) : IKE
There doesn’t seem to be any good reason why President Eisenhower was called “Ike”. However, it is known that the nickname dates back to his childhood as his parents called him “Ike” as well as “Dwight”.

48. Holiday Inn alternative : RAMADA
The Ramada Inn hotel chain takes its name from the Spanish word for a shady resting place. A ramada is a shelter, with a rook and no walls, mainly found in the American southwest. Nowadays, the shelter can be temporary or permanent, but originally ramadas were makeshift shelters constructed by aboriginal Indians from branches or bushes.

The first Holiday Inn hotel was opened in 1952. The name for the chain was inspired by the 1942 movie “Holiday Inn” starring Bing Crosby and Fred Astaire.

49. Barton of the 40-Down : CLARA
Clara Barton was deeply disturbed by her experiences caring for the wounded during the Civil War. She dedicated herself after the war towards American recognition of the International Committee of the Red Cross. The American Red Cross was inevitably formed, in 1881, and Barton was installed as its first president.

52. Big appliance maker : AMANA
The Amana Corporation takes its name from the location of its original headquarters, in Middle Amana, Iowa.

53. Scrabble pieces : TILES
The game of Scrabble has been around since 1938, the invention of an architect named Alfred Moshoer Butts. Butts determined the optimum number of tiles of each letter and the appropriate point value of each tile, by analyzing letter distributions in publications like our beloved “The New York Times” …

54. China’s Zhou ___ : ENLAI
Zhou Enlai (also Chou En-Lai) was the first government leader of the People’s Republic of China and held the office of Premier from 1949 until he died in 1976. Zhou Enlai ran the government for Communist Party Leader Mao Zedong, often striking a more conciliatory tone with the West than that of his boss. For example, he was instrumental in setting up President Nixon’s famous visit to China in 1972. Zhou Enlai died just a few months before Mao Zedong, with both deaths leading to unrest and a dramatic change in political direction for the country.