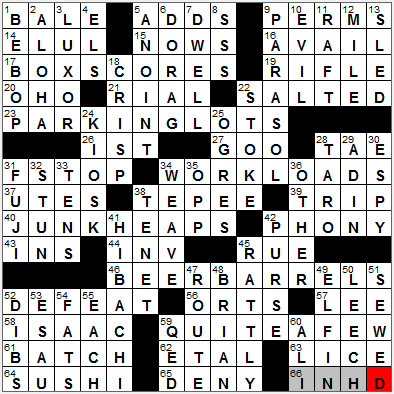 CROSSWORD SETTER: C. W. Stewart
THEME: Many Endings … each of the theme answers ends with a words meaning “many”:


Today’s Wiki-est, Amazonian Googlies
Across
9. Salon jobs, for short : PERMS
A perm is the name given to a permanent wave, a chemical or thermal treatment of hair to produce waves or curls. I don’t worry about such things as it’s a number one all over for me …

14. Jewish month after Av : ELUL
Elul is the month in the Hebrew calendar that occurs in August-September.

17. Printed results of baseball games : BOX SCORES
In baseball, the line square is a summary set of statistics for the game. The line square is seen at every baseball stadium, and includes the number of runs scored by each team per innings, as well as the total number of hits and errors. The more comprehensive box score includes the line score, but also shows the individual performance of each player.

21. Iranian money : RIAL
The “Rial” is name of the currency of Iran (as well as Yemen, Oman, Cambodia and Tunisia).

31. Camera setting : F-STOP
Varying the f-stop in a lens varies how big the lens opening (the aperture) is when a photograph is taken. Smaller apertures (higher f-stop values) admit less light, but result in sharper photographs.

37. Beehive State tribe : UTES
The Ute is a group of Native American tribes that now resides in Utah and Colorado. The Ute were not a unified people as such, but rather a loose association of nomadic groups.

When Mormon pioneers were settling what is today the state of Utah, they referred to the area as Deseret, a word that means “beehive” according to the Book of Mormon. Today Utah is known as the Beehive State, and there is a beehive symbol on the Utah state flag.

38. Shelter for 37-Across : TEPEE
A tepee (also written as “tipi” and “teepee”) is a cone-shaped tent traditionally made from animal hides that is used by the Great Plains Native Americans. A wigwam is a completely different structure and is often a misnomer for a tepee. A wigwam is a domed structure built by Native Americans in the West and Southwest, intended to be a more permanent dwelling. The wigwam can also be covered with hides but more often was covered with grass, reeds, brush or cloth.

40. Old jalopies : JUNK HEAPS
The origins of our word “jalopy” meaning “dilapidated old motor car” seem to have been lost in time, but the term has been around since the 1920s. One credible suggestion is that it comes from Jalapa, Mexico as the Jalapa scrapyards were the destination for many discarded American automobiles.

56. Table scraps : ORTS
Orts are small scraps of food left after a meal. The word comes from Middle English, and originally described scraps left by animals.

57. Filmmaker Spike : LEE
Shelton Jackson Lee is the real name of Spike Lee, the film director and producer. Lee’s first feature-length film, released in 1986, was “She’s Gotta Have It”. Lee shot the film in just twelve days, and kept the movie within its relatively small budget of only $175,000. “She’s Gotta Have It” grossed over $7 million …

58. Sci-fi’s Asimov : ISAAC
Isaac Asimov was a wonderful science fiction writer, and a professor of biochemistry. He was a favorite author as I was growing up and I must admit that some hero worship on my part led me to study and work as a biochemist early in my career. My favorite of his works is the collection of short stories called “I, Robot”.

64. Japanese restaurant staple : SUSHI
Sushi is a Japanese dish that has as its primary ingredient cooked, vinegared rice. The rice is usually topped with something, most often fish, and can be served in seaweed rolls. If you want raw fish by itself, then you have to order “sashimi”.

66. How many TV programs are aired nowadays : IN HD
In the digital world, resolution of a display, television, image etc. is defined by the number of pixels that can be displayed in a standard area (say a square inch). The emphasis today is on producing larger area displays/televisions, i.e increasing the number of pixels simply by increasing the size of the screen. In the past couple of decades the emphasis was on adding more pixels within the same screen size to increase resolution. This would just be wasted effort these days as further increases in resolution cannot be perceived by the eye. Now that TVs are capable of displaying such high resolutions, broadcasters are responding by producing a video signal of higher resolution that they call high-definition television, HDTV.

Down
1. Jazz genre : BEBOP
The jazz term “bebop” probably came from “Arriba! Arriba!”, words of encouragement from Latin American bandleaders to their musicians.

2. Hawaiian hello : ALOHA
“Aloha” has many meanings in English: “affection, love, peace, compassion and mercy”. More recently it has come to mean “hello” and “goodbye”, but only since the mid-1800s.

3. Pyramid-shaped hotel in Vegas : LUXOR
The spectacular-looking Luxor hotel in Las Vegas is the second-biggest hotel in the city (the MGM Grand is the largest). The pyramid-shaped building, along with two tower structures, houses 4, 400 rooms. The hotel is named for the city of Luxor in Egypt, the site of the Ancient Egyptian city of Thebes. At the apex of the Luxor Hotel sits a 42.3 billion candlepower light beam, the strongest beam of light in the world.

4. Chicago trains : ELS
The Chicago “L” is the second largest rapid transit system in the US, with the New York City Subway being the largest. The “L” is also the second oldest, again with the New York Subway system having the honor of being around the longest. Note that the official nickname for the system is the “L” (originally short for “elevated railroad”), although the term “El” is also in common use (especially in crosswords as “ELS”). The L is managed by the Chicago Transit Authority (CTA).

6. Hip-hopper’s headgear : DO-RAG
Hip-hoppers might wear do-rags today, but they have been around for centuries. If you recall the famous image of Rosie the Riveter, she was wearing a do-rag. The etymology is pretty transparent, a piece of cloth (rag) to hold a hairstyle (do) in place.

12. 1/500 of the Indianapolis 500 : MILE
The first Indy 500 race was held on Memorial Day in 1911. The winner that day was one Ray Harroun. He had seen someone using a rear view mirror on a horse-drawn vehicle, and decided to fit one on his Marmon “Wasp” motor car. Supposedly that was the first ever use of a rear view mirror on a motor vehicle.

13. Iditarod transport : SLED
The Iditarod Trail Sled Dog Race coves a massive 1,161 miles. The race starts every year on the first Saturday in March, with the first race having been held in 1973. The fastest finishing time was set in 2002 at just under 9 days. The first few races only used a northern route, but then a southern route was added to the roster every second year. It’s kind of a good thing, because when the racers take the northern route they don’t even pass through the town of Iditarod!

24. Newsstand : KIOSK
We tend to use the word “kiosk” in North America to mean a newsstand, a usage that stems from the British “telephone kiosk”, those iconic  red structures found on some street corners in the UK. “Kiosk” came into English via French from the Turkish “koshk” meaning “pavilion, place”.

28. Poi source : TARO
The corm of some taro plants is used to make poi, the traditional Hawaiian dish (that I think tastes horrible). When a taro plant is grown as an ornamental, it is often called Elephant Ears due to the shape of its large leaves.

29. Situation after deuce : AD IN
In tennis, if the score reaches “deuce” (i.e. when both players have scored three points), then the first player to win two points in a row wins the game. The player who wins the point immediately after deuce is said to have the “advantage”. If the player with the advantage wins the next point then that’s two in a row and that player wins the game. If the person with the advantage loses the next point, then advantage is lost and the players return to deuce and try again. If the one of the players is calling out the score then when he/she has the advantage that player announces “ad in” or more formally “advantage in”. If the score announcer’s opponent has the advantage, then the announcement is “ad out” or “advantage out”. Follow all that …?

31. Japan’s tallest peak : FUJI
Mount Fuji is Japan’s highest and most famous mountain. It is an active volcano, situated just west of Tokyo.

32. Use a Taser on : STUN
Victor Appleton wrote a novel for young adults called “Tom Swift and His Electric Rifle”. The company that developed the TASER electroshock weapon named their product as a homage to the novel, as TASER is an acronym standing for “Thomas A. Swift’s Electric Rifle”. Interesting, eh?

35. Like an antonym: Abbr. : OPP
An antonym is an “anti-synonym”. A synonym is word having the same sense as another, and an antonym the opposite.

41. Japanese grill : HIBACHI
The traditional hibachi in Japan is a heating device, often a ceramic bowl or box that holds burning charcoal. This native type of hibachi isn’t used for cooking, but rather as a space heater (a brazier). Here in the US we use the term hibachi to refer to a charcoal grill used as a small cooking stove, which in Japanese would be called a “shichirin”.

48. Newscaster Williams : BRIAN
Brian Williams is currently the anchor of NBC’s “Nightly News”. Williams did not graduate from college, and instead left school to take an internship spot with the administration of President Jimmy Carter. Although Williams has done very well for himself, he does say that he regrets not having finished college. Stay in school, kids …

52. “That’s mine!” : DIBS
When a child says “dibs”, he or she is making a claim on something, calling it his or hers. “Dibs” is derived from the word “dibstone”, a piece once used as a jack in a children’s game.

54. Suet and blubber : FATS
Fat, when extracted from the carcass of an animal, is called “suet”. Untreated suet decomposes at room temperature quite easily so it has to be “rendered” or purified to make it stable. Rendered fat from pigs is what we call “lard”. Rendered beef or mutton fat is known as “tallow”.

59. Proof-ending letters : QED
QED is used at the end of a mathematical proof or a philosophical argument. The QED acronym stands for the Latin “quod erat demonstrandum” meaning “that which was to be demonstrated”.

60. Boxer called “The Greatest” : ALI
Cassius Marcellus Clay, Jr. was born in 1942 in Louisville, Kentucky. Clay changed his name to Muhammad Ali when he converted to Islam in 1964. Who can forget Muhammad Ali lighting the Olympic flame for the 1996 games in Atlanta? Ali was presented with a gold medal during those ’96 Games, a replacement for the medal he won at the 1960 Olympics. He had thrown the original into the Ohio River as a gesture of disgust after being refused service at a “whites only” restaurant.