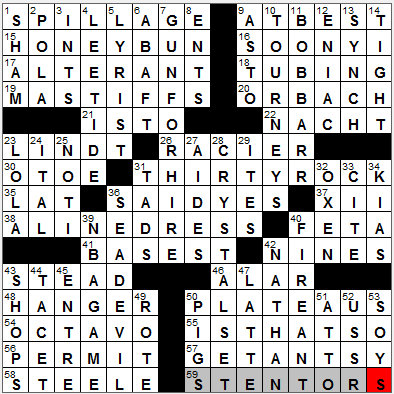 
Today’s Wiki-est, Amazonian Googlies
16. André and Mia adopted her : SOON-YI
Soon-Yi Previn is the adopted daughter of actress Mia Farrow and pianist/conductor André Previn. After Farrow and Previn divorced, Farrow started seeing famed movie director Woody Allen. That relationship ended when Farrow discovered that Allen was having an affair with her daughter Soon-Yi. Woody Allen and Soon-Yi Previn were married in 1997 and are still together.

19. Big dogs : MASTIFFS
There are a number of Mastiff breeds of dog, all of which are noted for their large size. Even though modern Mastiffs generally have an easy temperament, over the centuries the Mastiff breeds have been used as guard dogs and war dogs, even back to Ancient Roman times.

20. 1969 Tony winner for “Promises, Promises” : ORBACH
Jerry Orbach was an American actor, noted for playing one of the lead detectives in “Law & Order” on television. Orbach also provided the voice for the character Lumière in the Disney feature “Beauty and the Beast”.

23. Big name in gourmet chocolate : LINDT
The delicious Swiss chocolate sold under the Lindt brand name has its origins in a small confectionery store in Zurich in the 1840s. Lindt purchased our local chocolate company here in San Francisco, Ghirardelli, back in 1998.

26. More likely to be bowdlerized : RACIER
To bowdlerize is to expurgate or censor, to remove material from a work that is deemed to be offensive. The term comes from Thomas Bowdler, an English editor who published works of William Shakespeare in 1818 that had “offensive” words and expressions removed, so that they would be appropriate for “women and children”.

30. Chiwere speaker : OTOE
The Otoe (also Oto) Native American tribe originated in the Great Lakes region as part of the Winnebago or Siouan tribes. The group that would become the Otoe broke away from the Winnebago and migrated southwestwards ending up in the Great Plains. In the plains the Otoe adopted a semi-nomadic lifestyle dependent on the horse, with the American bison becoming central to their diet.

Chiwere is a Siouan language spoken by the Otoe people, as well as the Missouria and Iowa peoples.

31. Emmy-winning show of 2007, ’08 and ’09 : THIRTY ROCK
“30 Rock” is a sitcom on NBC that was created by the show’s star Tina Fey. Fey is an ex-performer and writer from “Saturday Night Live” and uses her experiences on that show as a basis for the “30 Rock” storyline.

37. Face-topping figure : XII
There is often a Roman numeral 12 (XII) at the top of a clock face.

38. 1955 Dior debut : A-LINE DRESS
Christian Dior was a French fashion designer. As WWII approached, Dior was called up by the French military, drawing a temporary halt to his career in fashion. He left the army in 1942 and for the duration of the war designed clothes for wives of Nazi officers and French collaborators. After the war his designs became so popular that he helped reestablish Paris as the fashion center of the world.

40. Tiropita ingredient : FETA
Feta is a Greek cheese made from sheep’s milk, or a mixture of sheep’s and goat’s milk. The cheese is salted and cured in a brine solution for several months before it is eaten.

Tiropita is a Greek pastry, a savory filled with a mixture of cheese and egg.

42. Nearly flawless bodies? : NINES
I guess the idea is that some folks call an exceptionally attractive person a “ten”, so a “nine” has a flaw or two. To me though, beauty is in the eye of the beholder …

46. 1989 E.P.A. target : ALAR
The chemical name for Alar, a plant growth regulator and color enhancer, is daminozide. It was primarily used on apples but was withdrawn from the market when it was linked to cancer.

54. Smallish printing format : OCTAVO
Some common book formats/sizes are folio, octavo and quarto. For an octavo book sixteen pages of text are printed, eight pages on each side of a “full-size” piece of paper. The pages are formed by folding the sheet of paper three times in half, giving a group of sixteen pages printed on eight leaves (after separation). The size of the resulting pages of course depends on the size of the original sheet, but each page is one eight the size of that original (hence the name octavo). Nowadays the octavo size refers to books that are between eight and ten inches tall.

59. Their voices really carry : STENTORS
Stentor was a figure in Greek mythology, a Greek herald during the Trojan War. He was noted for having a powerful voice, so today we describe someone with such a characteristic as “stentorian”. The original Stentor supposedly died after being defeated by Hermes in a shouting contest.

Down
1. Fast shuffle : SHAM
Fast shuffle is another name for stacking a deck of cards, placing cards in such a way that the dealer is favored.

4. It goes whichever way the wind blows : LEE TIDE
A leeward tide (sometime lee tide) is one that runs in the same direction that the wind is blowing. A windward tide, on the other hand, runs in the opposite direction to the wind. I think that the main danger with a lee tide is when a boat is at anchor. If the tide and wind are acting in concert then the anchor is more likely to slip.

5. Apollo, for one : LYRIST
A lyre is a stringed instrument, most closely associated with Ancient Greece.

6. Sailor’s behind : ABAFT
On a boat the term “abaft” means “towards the stern”.

8. Forest race of fantasy : ENTS
Ents are those tree-like creatures that live in J. R. R. Tolkien’s Middle-earth, in his series of books “The Lord of the Rings”. “Ent” is an Old English word for “giant”.

11. 2008 Libertarian presidential candidate : BOB BARR
Before Bob Barr joined the Libertarian party, he served as one of Georgia’s Republican Representatives in the US House. Barr came to prominence during the Clinton administration when he was one of the leaders of the movement to impeach the President, and the first representative to call for the President’s resignation after the Monica Lewinsky scandal broke.

12. Computing behemoth : ENIAC
The acronym ENIAC stands for Electronic Numerical Integrator and Calculator (although many folks insist that the C was for “Computer”). ENIAC was the first general-purpose electronic computer. It was designed to calculate artillery firing tables, but it ended up being used early on to make calculations necessary for the development of the hydrogen bomb. Given its uses, it’s not surprising to hear that development of ENIAC was funded by the US Army during WWII.

23. Woman who “drank Champagne and danced all night,” in song : LOLA
“Lola” is a fabulous song, written by Ray Davies and released by the Kinks back in 1970. Inspired by a real life incident, the lyrics tell of young man who met a young “lady” in a club, danced with her, and then discovered “she” was actually a transvestite. The storyline isn’t very traditional, but the music is superb.

28. Early radio receiver : CRYSTAL SET
A crystal radio is a passive receiver, meaning that it uses the power in the radio signal to produce sound and does not amplify that signal (it has not battery). The crystal in the radio acts as a primitive form of diode. The sound coming out of a crystal set is so low that you can only hear it with headphones.

32. Draft team : OXEN
A draft is a team of animals used to pull a load.

34. Rondos, e.g. : KIAS
Kia Motors is the second largest manufacturer of cars in South Korea, behind Hyundai (and Hyundai is a part owner in Kia now). In recent years, Kia has focused on sales into Europe, and has been remarkably successful.

36. Big ray : SEA DEVIL
“Sea devil” is another name for the manta ray.

39. Magic show? : NBA GAME
The Orlando Magic were formed in 1989 as an NBA expansion team. A local paper was asked to run a competition to suggest names for the new team and the community came up with its four top picks of “Heat”, “Tropics”, “Juice” and “Magic”. A committee then opted for the “Orlando Magic”. The best choice I think …

40. Producer of the venom solenopsin : FIRE ANT
Fire ants are stinging ants. Most stinging ants bite their prey and then spray acid on the wound. The fire ant, however, bites to hold on, and then injects an alkaloid venom from its abdomen, creating a burning sensation in humans that have been nipped.

45. ___ Rios de Minas, Brazil : ENTRE
Entre Rios de Minas is a municipality in Minas Gerais, one of 26 states of Brazil.

47. It might be a triple : LATTE
The term “latte” is an abbreviation of the Italian “caffelatte” meaning “coffee (and) milk”. Note that in the correct spelling of “latte”, the Italian word for milk, there is no accent over the “e”. An accent is often added by mistake when we use the word in English, perhaps meaning to suggest that the word is French.

51. Quintillionth: Prefix : ATTO-
Numbers were another thing that caused me problems when I moved to the US. Where I come from a thousand million is just that, a thousand million, whereas in the US that’s a billion. All the names for numbers bigger than a US billion are different then in Europe. What’s called a quintillion here (a million x a trillion US) we just call a trillion.

52. Locale in a Beatles title : USSR
By the time the Beatles recorded “Back in the U.S.S.R”, they were having a lot of problems working with each other. The song was recorded in 1968, with the band formally dissolving in 1970. Tensions were so great during the recording of “Back in the U.S.S.R” that Ringo Starr actually stormed out saying that he had quit, and the remaining three Beatles made the record without Ringo. Drums were played mainly by Paul McCartney, but there are also drum tracks on the final cut by both George Harrison and John Lennon. Interesting, huh?

53. Kikkoman options : SOYS
Kikoman is a company headquartered in Japan, noted in North America as a producer of soy sauce.