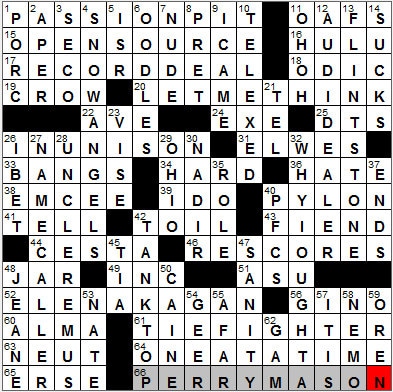 
Today’s Wiki-est, Amazonian Googlies
1. Drive-in theater, in old slang : PASSION PIT
I must own up to going to a drive-in theater as one of my first “treats” on arriving in the US. I regarded going to a drive-in as a very American thing to do, and thoroughly enjoyed the experience. You won’t see drive-ins back in Ireland, as you wouldn’t be able to see the screen because of all the rain!

11. Klutzes : OAFS
Klutz of course comes from Yiddish. The Yiddish word for a clumsy person is “klots”.

16. Streaming video giant : HULU
Hulu.com is a website providing streaming video of full television shows. It is a joint venture of NBC and Disney, and so features a lot of their content. The service is free and is supported by advertising, but you can sign up for a premium subscription and get access to more shows. A lot of younger folks seem to use it a lot …

18. Keatsian or Horatian : ODIC
The poet John Keats is famous for writing a whole series of beautiful odes. The most renowned are the so-called “1819 Odes”, a collection from the year 1819 that includes famous poems such as “Ode on a Grecian Urn”, “Ode to a Nightingale” and “Ode to Psyche”.

One of Ancient Rome’s leading lyric poets was Quintus Horatius Flaccus, or “Horace” as we tend to know him.

22. “___ Maria” : AVE
“Ave Maria”, or “Hail Mary” in English, is the prayer at the core of the Roman Catholic Rosary, a set of prayers asking for the assistance of the Virgin Mary. Much of the text of the prayer comes from the Gospel of Luke.

24. PC file extension : EXE
In the Windows Operating System, a file with the extension .exe is an “executable” file.

25. The shakes, for short : DTS
The episodes of delirium that can accompany withdrawal from alcohol are called Delirium Tremens (the DTs). The literal translation of this Latin phrase is “trembling madness”.

31. Cary of “The Princess Bride” : ELWES
Cary Elwes is an English actor, more noted for appearing in the 1987 film “The Princess Drive”. Cary is the son of a celebrated English portrait painter, Dominick Elwes.

33. They might be cut at a salon : BANGS
“Bangs” is another word that caught me out when I arrived in the US. “Bangs” back in Ireland are called “a fringe”. Apparently the US term is derived from the hair on horses somehow.

38. Bob Hope, for 18 Oscar ceremonies : EMCEE
I remember my first non-business visit to Los Angeles. I was a typical tourist and bought a map showing the homes of the stars and drove around Beverly Hills absorbing all the glitz. At one point I drove past a Rolls Royce that was stopped in oncoming traffic, waiting to make a left turn. The window was down, and the driver was puffing away on a big cigar. It was none other than Bob Hope, and seeing him there beside me. That was a big thrill …

44. Jai alai basket : CESTA
A cesta is the wicker scoop strapped to the wrist that is used for catching and throwing the ball in jai alai.

49. Company name ender : INC
When a company “incorporates”, one of the main advantages is that personal assets of the owners and officers are protected from any liability incurred by the company itself.

51. Where Barry Bonds was an All-American, in brief : ASU
Arizona State University has a long history, founded as the Tempe Normal School for the Arizona Territory in 1885.

52. First female dean of Harvard Law School : ELENA KAGAN
Elena Kagan was the Solicitor General of the United States, and not too long ago replaced Justice John Paul Stevens on the US Supreme Court. That made Justice Kagan the fourth female US Supreme Court justice (there have been 108 men!). I hear she is a fan of Jane Austen, and used to reread “Pride and Prejudice” once a year. Not a bad thing to do, I’d say …

56. Football Hall-of-Famer Marchetti : GINO
Gino Marchettie is a former American football player, one who played for the Dallas Texans and the Baltimore Colts. Marchetti started up a fast food restaurant chain with several of his teammates back in 1959. At its most successful, the chain called Gino’s Hamburgers had over 300 locations.

60. Michigan college : ALMA
Alma College in Alma, Michigan was founded by Michigan Presbyterians in 1886. The school has a Scottish heritage of which it is very proud. Alma has its own Scottish marching band, a Scottish dance troupe and even its own design of tartan.

61. Craft in a “Star Wars” battle scene : TIE FIGHTER
If you’re familiar with the “Star Wars” movies, you might recall the fighter spacecraft that had two vertical plate-like structures on either side of a command pod. Those were “TIE fighters”, with the acronym TIE standing for Twin Ion Engines.

66. “The Case of the Demure Defendant” protagonist : PERRY MASON
I must have read all of the Perry Mason books when I was in college. I think they kept me sane when I was facing the pressure of exams. Author Erle Stanley Gardner was himself a lawyer, although he didn’t get into the profession the easy way. He went to law school, but got himself suspended after a month. So, he became a self-taught attorney and opened his own law office in Merced, California. Understandably, he gave up the law once his novels became successful.

Down
8. Ready, in Rouen : PRET
Rouen is the major city in Normandy in northern France. During the days of Norman Britain, Rouen was one of the capitals of the Anglo-Norman dynasties. Rouen was also where Joan of Arc was burned at the stake in 1431.

9. Caesarean section? : I CAME
The oft-quoted “Veni, vidi, vici” (“I came, I saw, I conquered”) is believed by many to have been written by Julius Caesar. The words date back to 47 BC and refer to the short war between Rome and Pharnaces II of Pontus.

10. Wired, in a way : TELEXED
Telex grew out of the world of the telegraph. What Telex brought to telegraphy was the ability to route messages. Instead of instructing an operator at the other end to route a particular message to the intended party, the operator of a telex could route the message directly to another telex machine by using a rotary dial, very similar to that on a telephone.

12. Where to see some German models : AUDI DEALER
The Audi name has an interesting history. The Horch company was founded by August Horch in 1909 but soon after, Horch was forced out of his own business. He set up a new company and continued to use his own name as a brand. The old company sued him for using the Horch name so a meeting was held to choose something new. Horch’s young son was studying Latin in the room where the meeting was taking place. He pointed out that “Horch” was German for “hear”, and he suggested “Audi” as a replacement, the Latin for “listen”.

13. Rubble neighbor : FLINTSTONE
I once had the privilege of spending an afternoon in the room (Bill Hanna’s den) where Bill Hanna and Joe Barbera came up with the idea of “The Flintstones” …

28. Fictional narrator of “Legends of the Old Plantation” : UNCLE REMUS
Uncle Remus is the fictional narrator who was chosen by Joel Chandler Harris to tell his collection of African American folktales.

29. Home to the Browns and the Reds : OHIO
The Cleveland Browns football team was a charter member of the All-American Football Conference, formed in 1946. Cleveland is the only NFL city that has never hosted, and has never sent a team to the Super Bowl.

32. Moe Howard catchphrase : WHY I OUGHTA
If you’ve seen a few of the films starring “The Three Stooges” you’ll have noticed that the line up changed over the years. The original trio was made up of Moe and Shemp Howard (two brothers) and Larry Fine (a good friend of the Howards). This line up was usually known as “Moe, Larry and Shemp”. Then Curly Howard replaced his brother when Shemp quit the act, creating the most famous trio, “Moe, Larry And Curly”. Shemp returned when Curly had a debilitating stroke in 1946, and Shemp stayed with the troupe until he died in 1955. Shemp was replaced by Joe Besser, and then “Curly-Joe” DeRita. When Larry had a stroke in 1970, it effectively marked the end of the act.

35. Moe Howard, for Chris Diamantopoulos, in 2012 : ROLE
“The Three Stooges” is a 2012 movie, kind of a remake of several classic Three Stooges shorts, set in a contemporary time period. This is not one that I’ve seen, or even heard of up till now.

Marine’s are called jarheads because of their high and tight regulation haircuts, at least that’s the story I read …

48. ___ Dixon, self-styled seer who wrote an astrology book for dogs : JEANE
Jeane Dixon was a famous American astrologer who wrote a best-selling autobiography.

50. “The Dark Knight” actor : CAINE
There have been only two actors who have been nominated for an Academy Award in every decade from the 1960s to the 2000s. One is Jack Nicholson, and the other is Michael Caine. Caine is now known as Sir Michael Caine, as he was knighted by Queen Elizabeth II in the year 2000.

53. “Great” detective of kiddie lit : NATE
The Nate the Great series of children’s novels was written (mainly) by Marjorie Sharmat. Nate is like a young Sherlock Holmes, with a dog for a sidekick called Sludge. Some of the books have been adapted for television.

54. Will of “The Waltons” : GEER
Will Geer died in 1978, just after filming the sixth season of “The Waltons” in which he played Grandpa Zeb Walton. Geer was a noted social activist and was blacklisted in the fifties for refusing to appear before the all-powerful House Committee on Un-American Activities.

58. Literary captain who says “I am not what you call a civilized man!” : NEMO
In the 1954 movie version of “20,000 Leagues Under the Sea”, Captain Nemo goes down with his ship. In the novel by Jules Verne the fate of Nemo and his crew isn’t quite so cut and dry, although the inference is perhaps that they did indeed head for Davy Jones’ Locker.