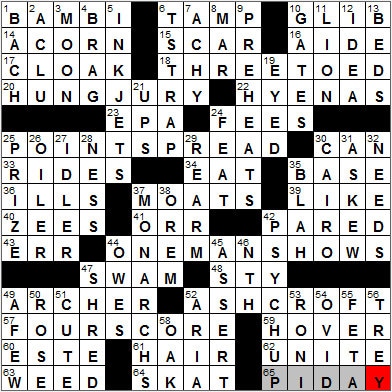 CROSSWORD SETTER: Dave Sarpola
THEME: PI DAY … the theme answers all start with a number (and one “point”) and, when combined, these numbers give an approximation to the celebrated mathematical constant denoted by the Greek letter PI:


Today’s Wiki-est, Amazonian Googlies
1. Hit 1942 film with the song “Love Is a Song” : BAMBI
The 1942 Disney classic “Bambi” is based on a book written by Felix Salten called “Bambi, A Life in the Woods”. There is a documented phenomenon known as the Bambi Effect, whereby people take an interest in animal rights, after having watched the scene where Bambi’s mother is shot by hunters.

6. Pack (down) : TAMP
“Tamp” means to pack down tightly by tapping. “Tamp” was originally used to specifically describe the action of packing down sand or dirt around an explosive prior to detonation.

22. Relatives of aardwolves : HYENAS
An aardwolf is a small hyena native to Eastern and Southern Africa. Aardwolf is an Afrikaans name meaning “earth wolf”.

23. Pollution watchdog org. : EPA
The Environmental Protection Agency (EPA) was set up during the Nixon administration and began operation at the end of 1970.

25. Bookie’s concern : POINT SPREAD
The point spread is the number of points offered to equalize the chances in a wager on a sports event. The team that is perceived as more likely to lose is given “free” points before the game starts, and the person backing the winning team wins only when the his/her team scores more than the losing team, including the point spread.

30. Pink-slip : CAN
The term “pink slip” can be used as a verb meaning “to terminate an employee”. No one really seems to know for sure where the term originated, but there are lots of stories.

39. Give a thumbs-up on Facebook : LIKE
Everything I know about Facebook I learned from the very entertaining movie “The Social Network”, from 2010. I have a Facebook page for this blog, but I really have no idea how to use it …!

41. Bobby of the rink : ORR
Bobby Orr is regarded as one of the greatest hockey players who ever played the game. By the time he retired in 1978 he had undergone over a dozen knee surgeries. At 31 years of age, he concluded that he just couldn’t skate any more. Reportedly, he was even having trouble walking …

49. Sagittarius, with “the” : ARCHER
Sagittarius is a constellation of the zodiac, with “sagittarius” being the Latin for “archer”. The constellation is usually represented by a centaur (half-bull, half-man) with a bow.

52. Bush cabinet member : ASHCROFT
John Ashcroft served as US Attorney General in the administration of President George W. Bush. Ashcroft is quite the musician and has composed some religious tunes in particular. When he was a member of the US Senate (representing the state of Missouri) he formed a barbershop quartet along with three of his colleagues that was called the Singing Senators.

57. 1863 speech opener : FOUR SCORE
I visited Gettysburg for the first time in 2010, and goodness me what a moving place that is. As I discovered on my visit, there are five known copies of Lincoln’s Gettysburg address and all of them differ in some way or another, so I suppose the exact words spoken will never be known. Martin Luther King Jr. evoked Abraham Lincoln’s words in another of America’s iconic addresses, his “I Have a Dream” speech. Lincoln’s speech began with “Four score and seven years ago …”, and King’s speech began with “Five score years ago …” a nod to the Gettysburg Address.

64. Trick-taking card game : SKAT
When I was a teenager in Ireland, I had a friend with a German father. The father taught us the game of Skat, and what a great game it is. It originated in Germany in the 1800s and is to this day the most popular game in the country. I haven’t played it in decades, but would love to play it again …

65. Mid-March celebration … or a hint to the starts of 18-, 25-, 44- and 57-Across : PI DAY
The first three digits of the constant pi are 3.14, so Pi Day is celebrated on March 14th every year since 1988 when it was inaugurated at the San Francisco Exploratorium. In countries where the day is usually written before the month, Pi Day is July 22nd, reflecting the more accurate approximation of pi as 22/7. Interestingly, March 14th is also Albert Einstein’s birthday.

If you divide the circumference of any circle by its diameter, then the resulting number is always the same and is denoted by the Greek letter “pi”. It is approximately equal to 22/7, or 3.14159.

Down
1. “Brandenburg Concertos” composer : BACH
Like so many of the great composers, the extent of Bach’s contribution to the repertoire wasn’t fully recognized until long after his passing. I think that Johann Sebastian Bach was certainly the greatest composer of the Baroque period, and is ranked by many as the greatest classical composer of all time. Bach died when he was 65-years-old, in 1750. He was buried in Old St. John’s Cemetery in Leipzig, and his grave went unmarked until 1894. At that time his coffin was located, removed and buried in a vault within the church. The church was destroyed in an Allied bombing raid during WWII, and so after the war the remains had to be recovered and taken to the Church of St. Thomas in Leipzig.

The six beautiful Brandenburg Concertos were composed by Johann Sebastian Bach and presented to the Margrave of Brandenburg-Schwedt in 1721.

2. Censorship-fighting org. : ACLU
The American Civil Liberties Union (ACLU) has its roots in the First World War, when it was founded to provide legal advice and support to conscientious objectors.

5. Some printers : INKJETS
Inkjet is a very accurate and descriptive name for a type of printer. Printing is done by shooting fine jets of ink onto the page.

10. Bush cabinet member : GATES
Robert Gates was appointed Director of the CIA by President George H.W. Bush. In taking that position, Gates became the only person in CIA history to rise from entry-level employee to Director. Gates also served in the administration of President George W. Bush, taking over as Secretary of Defense when Donald Rumsfeld resigned.

11. Symbol on Sri Lanka’s flag : LION
The name Sri Lanka translates from Sanskrit into English as “venerable island”. Before 1970, Sri Lanka was known as Ceylon, a name given to the country during British rule. The lion on the country’s national flag symbolizes the fight against British colonialism.

21. DHL competitor : UPS
United Parcel Service (UPS) is based in Sandy Springs, Georgia and has its own airline that operates out of Louisville, Kentucky.

Back in the sixties Larry Hillblom was making pocket money as a Berkeley law student by doing courier runs between San Francisco and Los Angeles. After law school he decided to parlay his experience into his own business and set up a courier service flying bills of lading ahead of freight from San Francisco to Honolulu. Hillblom brought in two buddies, Adrian Dalsey and Robert Lynn, as partners and the three were soon hopping on and off commercial flights and gradually making more and more money. And DHL was born … D (for Dalsey) H (for Hillblom) L (for Lynn).

24. Guinness Book entry : FEAT
“The Guinness Book of World Records” holds some records of its own. It is the best-selling, copyrighted series of books of all time and is one of the books most often stolen from public libraries! The book was first published in 1954 by two twins, Norris and Ross McWhirter. The McWhirter twins found themselves with a smash hit, and eventually became very famous in Britain hosting a TV show based on world records.

28. Lake of cryptozoological interest : NESS
The Loch Ness monster has been talked about for centuries, but modern interest started in 1933 when a spate of sightings was reported. Those sightings don’t seem to have stopped, with photographs really sparking the imagination.

The “Surgeon’s Photograph” is an image that was taken in 1934, supposedly of the Loch Ness monster. It is perhaps the most famous picture of Nessie to this day, the one with a “head” and “neck” sticking up out of the water. The picture’s renown doesn’t seem to have abated, even though it was shown to be a hoax in the mid-nineties. The picture is called the “Surgeon’s Photograph” because it was “taken” by a Dr. Wilson.

The study of animals whose existence have not yet been substantiated is called cryptozoology.

30. Tahrir Square’s locale : CAIRO
Cairo is the capital city of Egypt. It is the largest city on the continent of Africa and is nicknamed “The City of a Thousand Minarets” because of its impressive skyline replete with Islamic architecture. The name “Cairo” is a European corruption of the city’s original name in Arabic, “Al-Qahira”.

Tahrir Square is a major location in Cairo, Egypt. The name “Tahrir” translates to “Liberation” in English. The square was a focal point in the 2011 Egyptian Revolution staged against former president Hosni Mubarak.

37. Kansas City ___, Negro Leagues team with Satchel Paige, Jackie Robinson and Ernie Banks : MONARCHS
The Kansas City Monarchs was the most successful team in the history of baseball’s Negro Leagues. The Monarchs were a founding member of the league and continued to operate up until 1965, making it the longest-running franchise. The Monarchs also sent more players into the major leagues than any other team.

38. Utah city : OREM
Orem, Utah was originally known as “Sharon” (a Biblical name), then “Provo Bench”, and in 1914 it was given the family name of a local railroad operator, “Orem”. Orem gave itself the nickname “Family City USA” and, backing up that claim, in 2010 “Forbes” rated Orem the 5th best place in the country to raise a family.

52. “Nessun dorma,” for one : ARIA
“Nessum dorma” has to be the tenor aria that most tugs at the heart strings. It is taken from the last act of Puccini’s opera “Turandot”, and translates as “None shall sleep”. Back in my part of the world, “Nessun dorma” became a hit in the popular music charts, with a version by Pavarotti being used as the theme song to the 1990 FIFA World Cup in Italy. No other classical recording has ever done better in the charts.

53. Pasta, in product names : RONI
Rice-a-Roni was introduced in 1958 by the Golden Grain Macaroni Company of San Francisco. The company was run by an Italian immigrant and his four sons. The wife of one of the sons served a pilaf dish at a family diner that was a big hit, so her brother-in-law created a commercial version by blending dry chicken soup mix with rice and macaroni. Sounds like “a San Francisco treat” to me …

54. He wrote “Jupiter from on high laughs at lovers’ perjuries” : OVID
The Roman poet Publius Ovidius Naso is today known simply as Ovid. Ovid is usually listed alongside the two other great Roman poets, Horace and Virgil.

55. Greek cheese : FETA
Feta is a Greek cheese made from sheep’s milk, or a mixture of sheep’s and goat’s milk. The cheese is salted and cured in a brine solution for several months before it is eaten.