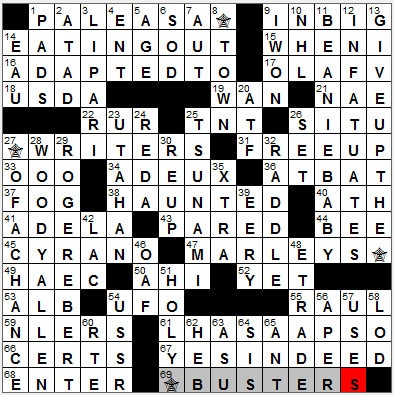 CROSSWORD SETTER: Kurt Mueller
THEME: HAUNTED … this is a rebus puzzle, with the word GHOST filling up four squares in the grid (marked by a spider’s web in the grid shown above). And there are a few spooky answers in the puzzle as well. Happy Halloween (almost)!
COMPLETION TIME: 10m 40s
ANSWERS I MISSED: 0


Today’s Wiki-est, Amazonian Googlies
Across
15. “___ Fall in Love” (1961 hit by the Lettermen) : WHEN I
The Lettermen formed as a group, a trio of male voices, way back in 1959. Although the line-up has changed over the years, The Lettermen are still around. They have been performing over 100 live concerts every year since 1961.

18. Food-stamping org. : USDA
The US Department of Agriculture dates back to 1862 when it was established by then-president Abraham Lincoln. Notably, Lincoln referred to the USDA as the “people’s department”, reflecting the agrarian basis of our economy back then.

21. Dundee denial : NAE
Nae is the Scottish vernacular for “no”.

22. Classic 1921 play set partly in a factory : RUR
“R.U.R.” is a play written in Czech by Karel Capek, first produced in 1921. It is a science fiction work and is remembered in part for introducing the world to the word “robot”. The words “automaton” and “android” were already in use, but Capek gave us “robot” from the original Czech “robota” meaning “forced labor”.

25. Atlanta-based cable channel : TNT
TNT stands for Turner Network Television. The TNT cable channel made a big splash in the eighties when it started to broadcast old MGM movies that had been “colorized”, not something that was a big hit with the public. In recent years, the TNT programming lineup is touted with the tagline “We Know Drama”, and includes shows like “Judging Amy”, “ER” and “Cold Case”.

34. For two : A DEUX
We use the French term “à deux” to describe something involving two people, usually in a private arrangement (like maybe a dinner together). The literal translation of “à deux” is “by two”.

41. “A Passage to India” woman : ADELA
“A Passage to India” is a wonderful novel by E. M. Forster set in the days of the British Raj. There are two excellent adaptations for the screen that I would recommend. There’s a BBC television version from 1965 starring a wonderful cast including Virginia McKenna and Cyril Cusack. There is also an Oscar-winning movie version from 1984 with Alec Guinness and Peggy Ashcroft. Forster had first-hand knowledge of life during the Raj, having worked in India during the twenties.

44. Contest in which the rules must be followed to the letter? : BEE
A spelling bee.

47. Fictional character who says “I wear the chain I forged in life” : MARLEY’S GHOST
Jacob Marley is a character appearing in the wonderful novel by Charles Dickens called “A Christmas Carol”. Marley was the deceased business partner of Ebenezer Scrooge, and in the story appears to Scrooge as a ghost.

53. Ritual garment : ALB
The alb is the white, neck-to-toe vestment worn by priests, usually with a rope cord around the waist. The term alb comes from “albus”, the Latin word for “white”.

54. X-File subj. : UFO
“The X-Files” is a very successful science fiction show that aired on the Fox network from 1993 to 2002. The stars of the show are David Duchovney (Fox Mulder) and the very talented Gillian Anderson (Dana Scully). By the time the series ended, it was the longest running sci-fi show in US broadcast history.

55. One of the Castros : RAUL
Raul Castro is the younger brother of Fidel Castro, and has been President of Cuba since 2008 when Fidel stepped aside.

59. Cubbies, e.g. : NLERS
The Chicago Cubs are one of only two teams still playing that are charter members of baseball’s National League (the other is the Atlanta Braves). The Cubs are known as the “Lovable Losers”, because they haven’t won the World Series since 1908 (after also winning it in 1907). That means the Cubs have the longest spell without a World Series title in the whole of baseball.

61. Tibetan terrier : LHASA APSO
The Lhasa apso breed of dog originated in Tibet, and is named after Lhasa (the capital city) and apso (a Tibetan word meaning “bearded”). The Lhasa apso has been around since 800 BC and is one of the oldest breeds in the world, one very closely related to the ancestral wolf.

66. Altoids alternative : CERTS
Certs was the first breath mint to be marketed nationally in the US, hitting the shelves in 1956. It’s called a mint, but it isn’t really as it contains no mint oil, but instead its famous ingredient named “Retsyn”.

69. 1984 film whose soundtrack had a #1 hit with the same title : GHOSTBUSTERS
1984’s “Ghostbusters” really is a fun movie. It stars Bill Murray and Harold Ramis, and was directed by Ivan Reitman (a trio that also worked together on 1981’s “Stripes”). The first draft of the screenplay was written by another star of the movie, Dan Akroyd. Akroyd originally envisioned “Ghostbusters” as a vehicle for himself and John Belushi, but sadly Belushi passed away before the project could be realized.

Down
2. Slightly : A TAD
Back in the 1800s “tad” was used to describe a young child, and this morphed into our usage meaning a small amount in the early 1900s. The original use of “tad” for a child is very likely a shortened version of “tadpole”.

3. Italy’s ___ Islands : LIPARI
The Aeolian Islands (also called the Lipari Islands) lie in the Tyrrhenian Sea off the north coast of Sicily. Included in the island chain is the largest of the group, Lipari, as well as Stromboli, the only island in the archipelago with an active volcano.

4. Certain M.D. : ENT
An Ear, Nose and Throat specialist is an ENT.

10. Senator’s org. : NHL
The Senators are the NHL hockey team in Ottawa, Canada. The current team, founded in the 1992-93 season, is the second NHL team in the city to use the name “Senators”. The original team was founded in 1917, and had a very successful run until the league expanded into the US in the late twenties. The cost of operating in what became the smallest NHL city eventually drove the Senators to St. Louis where the team played for a year as the Eagles before finally folding.

11. Toy collectible of the late ’90s : BEANIE BABY
There were originally just nine Beanie Babies when Ty Warner introduced the stuffed animal in 1993. In the late nineties the toy became a real fad, largely due to innovative marketing techniques. For example, there was no mass marketing with constant TV ads, and the production volume was limited pushing the line into the realm of collectibles. Beanie Baby models were also “retired” on a regular basis, fueling a “must have” behavior in the market.

20. Fed. bureau : ATF
The Bureau of Alcohol, Tobacco, Firearms and Explosives (ATF) is today part of the department of Justice. The ATF has its roots in the Department of Treasury dating back to 1886 when it was known as the Bureau of Prohibition. “Explosives” was added to the ATF’s name when the bureau was moved under the Department of Justice as part of the government reorganization called for in the Homeland Security Act of 2002.

23. Jazz fan, probably : UTAHAN
The Utah Jazz professional basketball team moved to their current home in Salt Lake City in 1979. As one might guess from the name, the team originated in New Orleans, but only played there for five seasons. New Orleans was a tough place to be based because venues were hard to come by, and Mardi Gras forced the team to play on the road for a whole month.

24. The scarlet letter : RED A
Hester Prynne is the main character in Nathaniel Hawthorne’s novel “The Scarlet Letter”. When Hester is convicted by her puritanical neighbors of the crime of adultery, she is forced to wear a scarlet “A” on her clothing for the rest of her life, hence the novel’s title, “The Scarlet Letter”.

25. Something of earth-shaking concern? : TSUNAMI
“Tsunami” is the Japanese word for “harbor wave”.

28. Who wrote “It’s not that I’m afraid to die, I just don’t want to be there when it happens” : WOODY ALLEN
Woody Allen’s real name is Allan Stewart Konigsberg. He has been nominated for an Academy Award an incredible 21 times in many different categories, and has won on three occasions. He has more Oscar nominations as a screenwriter than any other writer, but he spurns the Awards ceremony and only attended it once in all his years in the movie business. He broke tradition by turning up at the 2002 ceremony, unannounced, to beg producers to continue filming in his beloved New York City despite the fears created by the 9/11 attacks.

29. “Life Itself: A Memoir” autobiographer, 2011 : ROGER EBERT
Roger Ebert co-hosted a succession of film review television programs for over 23 years, most famously with Gene Siskel until Siskel passed away in 1999. Ebert was diagnosed and treated for thyroid cancer in 2002, and since then has undergone a number of surgical procedures. Sadly, he has lost his voice, but continues work as a film critic, focusing these days on the print medium.

32. Make by interlacing : RADDLE
“To raddle” is to twist together.

42. Fond du ___, Wis. : LAC
“Fond du lac” is French, meaning “bottom of the lake”, an apt name for the city of Fond du Lac, Wisconsin, located at the foot of Lake Winnebago. If you like to play the lottery, you might want to stop off in Fond du Lac as there is a stretch of South Main Street called “Miracle Mile”. Back in 1993, someone bought a ticket there and won $100 million. Then in 2006, another store sold a ticket that won $209 million. These things always come in threes, so buy your tickets now …

48. Major discount brokerage : E*TRADE
E*Trade is mainly an online discount brokerage. It was founded in 1982 in Palo Alto, California, and I used to drive by its headquarters almost every day. The company is now run out of New York City. E*Trade produces those famous Super Bowl ads with the talking babies staring into a web-cam.

51. Trinity member : HOLY GHOST
The Father, the Son, and the Holy Spirit/Ghost.

54. Cold war inits. : USSR
The former Soviet Union was created in 1922, not long after the Russian Revolution of 1917 that overthrew the Tsar. The new Soviet Union was roughly equivalent geographically to the old Russian Empire, and was comprised of fifteen Soviet Socialist Republics.

58. City near Ben-Gurion Airport : LOD
The city of Lod lies just a few miles southeast of Tel Aviv, and is the home of Ben Gurion International, Israel’s main airport.

62. New Test. book : HEB
The Epistle to the Hebrews is a book in the New Testament, with an unknown author.

63. The Sun Devils, for short : ASU
Arizona State University has a long history, founded as the Tempe Normal School for the Arizona Territory in 1885.