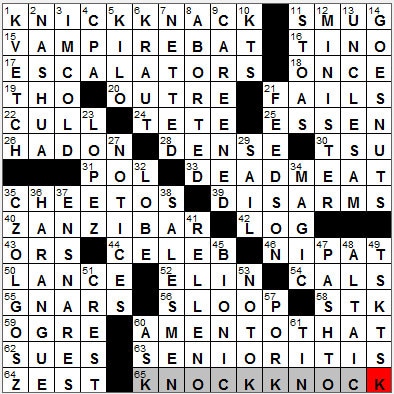 
Today’s Wiki-est, Amazonian Googlies
Across
1. Bibelot : KNICKKNACK
“Bibelot” is a French word for a trinket, a knickknack, a word that we imported into English.

15. It really sucks : VAMPIRE BAT
Vampire bats feed mostly in the blood of mammals, including humans. When they find a suitable “victim”, often one that is asleep, the bat usually lands close by and approaches its “meal” on the ground. It makes a small cut with its razor-sharp teeth and laps up the blood. The blood tends to flow freely as the bat’s saliva contains anti-coagulants. Reports of bats biting the neck of humans are very rare in the real world, but the neck is the preferred location of attack in the fantasy world of vampires.

16. 1997 Home Run Derby champion Martinez : TINO
Tino Martinez has retired from Major League Baseball. He played first base for a number of teams including the Mariners, Yankees, Cardinals and Devil Rays. Martinez was born and raised in Tampa, Florida, and as a boy he worked in his father’s cigar factory.

17. One-way flights? : ESCALATORS
Escalators have an advantage over elevators in that they can move larger numbers of people in the same time frame. They can also be placed in just about the same physical space that would be needed for a regular staircase. Patents for escalator-type devices were first filed in 1859, but the first working model wasn’t built until 1892 by one Jesse Reno. It was erected alongside a pier in Coney Island, New York, with the second escalator being placed at an entrance to the Brooklyn Bridge. Soon after, the Otis elevator company purchased the necessary patents and went into the business.

19. 1973 Nobel Peace Prize decliner Le Duc ___ : THO
Le Duc Tho was the Vietnamese diplomat who engaged in secret talks in Paris with Henry Kissinger in the early seventies. Those talks led to the eventual withdrawal of American troops from Vietnam, and also led to Le Duc Tho and Henry Kissinger being awarded the Nobel Peace Prize in 1973. Le Duc Tho refused to accept the award because there was no formal peace agreement signed at that point.

20. Singular : OUTRE
The word “outré” comes to us from French, as you might imagine, derived from the word “outrer” meaning “to overdo, exaggerate”. “Outrer” is also the ultimate root of our word “outrage”.

The Rodin Museum is my favorite of all the museums in Paris. The Musée Rodin is very special in that the building and garden that hold all of the works was once Rodin’s actual home and studio. Well worth a visit if you’re in the City of Lights …

30. Lao-___ : TSU
Lao Tse (also Lao-Tsu) is a central figure in the development of the religion/philosophy of Taoism.

31. House party? : POL
A politician is a party in the House.

35. Frito-Lay product : CHEETOS
Cheetos snacks were developed by the same guy who created Fritos, hence the name. They’ve been on the market since 1948, and up until the turn of the century the name was written “Chee-tos”. Oh, and Cheetos contain pork enzymes, so vegetarians beware!

40. Island state in a 1964 merger : ZANZIBAR
When Zanzibar merged with Tanganyika in 1964, the resulting state was named the United Republic of Tanzania, with “Tanzania” being a porte-manteau of “Zanzibar” and “Tanganyika”.

42. Explorer’s need : LOG
The word “logbook” dates back to the days when the captain of a ship kept a daily record of the vessel’s speed, progress etc. using a “log”. A log was a wooden float on a knotted line that was dropped overboard to measure the vessel’s speed.

43. Places for cutters, for short : ORS
Cutters (surgeons) can be found in operating rooms.

50. What a mail carrier might use in self-defense? : LANCE
Mail is a type of armor that was worn as far back as 300 BCE. Mail is basically a mesh made up of metal rings that are linked together and fashioned into a protective garment.

52. ___ Nordegren, ex-wife of Tiger Woods : ELIN
Elin Nordegren is the ex-wife of Tiger Woods. Nordegren is a native of Sweden, and it was back in Sweden that she was hired as a nanny by the wife of golfer Jasper Parnevik. The job brought her to the US where she became a popular attraction on the professional golfing circuit. Apparently there was a long line of single golfers who wanted to be introduced to her, with Tiger Woods asking for an introduction for a year before he finally got to go out with her. The pair were married in 2004.

56. Cousin of a cutter : SLOOP
Sloops and cutters are sailboats, and each has just one mast. One major difference between the two types of vessel is that the mast on a cutter is set much further aft than the mast on a sloop.

59. Minotaur, e.g. : OGRE
Minos was the king of Crete in Greek mythology, and the son of Zeus and Europa. He had an elaborate labyrinth built under the island, designed by the architect Daedalus and his son Icarus (who famously died trying to escape from the island by “flying” away). In the labyrinth, King Minos kept the Minotaur, a dreadful creature with the head of a bull on the body of a man.

63. Malady that typically worsens in the spring : SENIORITIS
Senioritis is the colloquial name given to the tendency of some senior students to lose motivation to study as they head towards the end of high school and college careers.

Down
1. Beef producer? : KVETCH
The word “kvetch” of course comes to us from Yiddish, with “kvetshn” meaning “to complain” or “squeeze”.

9. Went without control : CAREENED
The word “careen” dates back to 1590 when it meant “to turn a ship on its side, exposing the keel”. The word evolved from the Middle French word “carene” meaning “keel”. Our modern usage, meaning to lean or tilt, only dates back as far as the 1880s. Careen should not be confused with “career”, a verb meaning to move rapidly. One has to “career” from side-to -side in order to “careen”.

10. Gold meas. : KTS
A karat (also “carat”, the spelling outside North America) is a measure of the purity of gold alloys, with 24-carat representing pure gold.

11. Sides of some ancient temples : STOAS
A stoa was a covered walkway in Ancient Greek architecture. It usually consisted of columns lining the side of a building or buildings, with another row of columns defining the other side of the walkway. The columns supported a roof. Often stoae would surround marketplaces in large cities.

13. Steely-gazed pointer : UNCLE SAM
The Uncle Sam personification of the United States was first used during the War of 1812. The “Uncle Sam” term was so widely accepted that even the Germans used it during WWII, choosing the codeword “Samland” to mean “America” in intelligence communiques.

23. Funny George : LOPEZ
George Lopez is a comedian and talk show host, perhaps most noted for starring in the sitcom known simply as “George Lopez”, a show that Lopez produced himself.

32. Gray area? : LOBE
Many of the lobes of the brain are largely composed of gray matter.

35. Leon ___, McKinley’s assassin : CZOLGOSZ
President McKinley was re-elected in 1900, and of course failed to serve out the full term. In September of 1951 he went to the Pan-American Exposition in Buffalo, New York where he went to meet the public at the Exposition’s Temple of Music. There Leon Czolgosz was waiting, armed with a pistol. He shot the President twice before being subdued (and beaten) by the crowd. Doctors operated, and were able to stabilize President McKinley. The medical profession decided to leave one bullet inside the victim, on the face of it a good decision as the President spent almost a week apparently recovering from his ordeal. However, he relapsed, and eight days after being shot he died from gangrene surrounding the wound.

47. Afghani tongue : PASHTO
Pashto is the native language of the Pashtun and Afghani peoples.

61. When repeated, hero of children’s lit : TIN
“The Adventures of Tintin” was one of my favorite series of comic books when I was growing up. We were encouraged to read the stories in the original French in order to help us learn the language for school. The series was created by the Belgian artist Georges Rémi, who wrote the stories under the pen name Hergé. Great stuff …