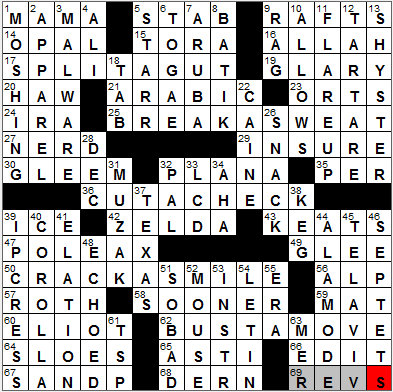 CROSSWORD SETTER: Gary Cee
THEME: Divides … all of the theme answers are expressions beginning with a word that “divides”:


Today’s Wiki-est, Amazonian Googlies
Across
1. “That’s all right, ___” (lyric from Elvis’s first single) : MAMA
“That’s All Right” was the first single ever released by Elvis Presley, in 1954.

14. Pearly gem : OPAL
An opal is often described as having a milky iridescence, known as “opalescence”.

15. When said three times, a W.W. II cry : TORA
The pre-determined code word to be used by the Japanese if they managed to achieve surprise in their attack on Pearl Harbor was “tiger”, or “tora” in Japanese. This gave the name to the excellent 1970 movie “Tora! Tora! Tora!”.

23. Dinner scraps : ORTS
Orts are small scraps of food left after a meal. The word comes from Middle English, and described scraps left by animals.

24. A Gershwin : IRA
Ira Gershwin was the lyricist who worked with his brother George to create such American classics as the songs “I Got Rhythm” and “Someone to Watch Over Me”, and the opera “Porgy and Bess”. After his brother died, Ira continued to create great music, working with the likes of Jerome Kern and Kurt Weill.

27. Poindexter type : NERD
Poindexter is a character in the television show “Felix the Cat”, which originally aired in the late fifties. He is a nerdy type, wearing a lab coat and glasses with thick lenses. The character lends his name to the term “poindexter”, meaning just that, a nerd.

30. Crest alternative : GLEEM
Gleem is a Proctor & Gamble brand of toothpaste. The original formulation was introduced back in 1952, with a mystery ingredient called GL-70 which the manufacturers claimed had a unique ability to fight mouth odor and tooth decay. No one seems to know what GL-70 is, or if in fact it existed at all! Gleem II was introduced in 1969 in an attempt to revitalize sales. It seemed to work. Must have been the green sparkles …

42. One of the Fitzgeralds : ZELDA
Zelda Fitzgerald, the wife of F. Scott Fitzgerald, was a novelist in her own right. Her one and only novel is “Save Me the Waltz”, a semi-autobiographical account of her life and marriage.

John Keats is famous for writing a whole series of beautiful odes. The most famous are the so-called “1819 Odes”, a collection from the year 1819 that includes famous poems such as “Ode on a Grecian Urn”, “Ode to a Nightingale” and “Ode to Psyche”.

47. Medieval infantry weapon : POLEAX
A pollaxe (also “poleax”) is a medieval weapon. As one might expect, it is an axe on a pole. The pole could be anything from 4 to 8 feet in length.

57. Novelist Philip : ROTH
Author Philip Roth’s two most famous works are probably his 1959 novella “Goodbye, Columbus” for which he won a National Book Award, and his extremely controversial 1969 novel “Portnoy’s Complaint”. The latter title was banned in some libraries in the US, and was listed as a “prohibited import” in Australia. The controversy surrounded Roth’s treatment of the sexuality of the main character, a young Jewish bachelor undergoing psychoanalysis for his “complaint”.

58. Tulsan, e.g. : SOONER
The 1889 Indian Appropriations Act officially opened up the so called Unassigned Lands, land in Oklahoma on which no Native American tribes had settled. Once the Act was signed, those lands became available for settlement. Those people that settled the same lands illegally, prior the date specified, they were termed “Sooners” as their situation was defined in the “sooner clause” of the Act.

64. Fruit related to cherry plums : SLOES
The sloe is the fruit of the blackthorn bush, and is the flavoring that gives gin its distinctive taste.

65. Italian wine center : ASTI
Asti is in the Piedmont region of northwest Italy. It is perhaps most famous for its Asti Spumante sparkling white wine.

67. ___ 500 : S AND P
Standard & Poor’s (S&P) is a financial services company, famous for its stock market indices, especially the S&P 500. The company also publishes credit ratings for sovereign governments, and in 2011 famously lowered the rating of the US federal government from AAA to  to AA+.

Down
1. Punk rock concert activity : MOSHING
Moshing is the pushing and shoving that takes place in the audience at a concert (usually a punk or heavy metal concert). The area directly in front of the stage is known as the mosh pit. When a performer does a “stage dive” it is into (or I suppose “onto”) the mosh pit. It doesn’t sound like fun to me. Injuries are common in the mosh pit, and deaths are not unknown.

3. It might give you a virus : MALWARE
“Malware” is a collective term for software and program code that is created to intentionally disrupt and exploit computer systems. Viruses, worms, trojan horses and spyware are all covered by the term. “Malware” is short for “malicious software”.

4. Boxer with an allegiance to 16-Across : ALI
Cassius Marcellus Clay, Jr. was born in 1942 in Louisville, Kentucky. Clay changed his name to Muhammad Ali when he converted to Islam in 1964. Who can forget Muhammad Ali lighting the Olympic flame for the 1996 games in Atlanta? Ali was presented with a gold medal during those ’96 Games, a replacement for the medal he won at the 1960 Olympics. He had thrown the original into the Ohio River as a gesture of disgust after being refused service at a “whites only” restaurant.

5. Fab Four name : STARR
Ringo Starr’s real name is Richard Starkey. Before he joined the Beatles (replacing drummer Pete Best), Starkey played with the Raving Texans. It was with the Raving Texans that he adopted the name “Ringo Starr” because he wore a lot of rings, and he thought it sounded “cowboyish”. Back then his drum solos were billed as “Starr Time”.

6. Ancient Romans’ wear : TOGAE
In Ancient Rome the classical attire known as a toga (plural “togae”) was usually worn over a tunic. The tunic was made of linen, and the toga itself was a piece of cloth about twenty feet long made of wool. The toga could only be worn by men (the female equivalent was called a “stola”) and only if those men were Roman citizens.

7. Dutch-speaking Caribbean isle : ARUBA
Aruba is one of the so-called ABC Islands. The ABC Islands is the nickname given to the three western-most islands of the Leeward Antilles in the Caribbean. The nickname comes from the first letters of the island names: Aruba, Bonaire and Curaçao. All three of the ABC Islands are part of the Kingdom of the Netherlands.

8. Dyed fabric : BATIK
Genuine batik is produced by applying wax to the parts of the cloth that are not to be dyed. After the cloth has been dyed, it is dried and then dipped into a solvent that dissolves the wax.

13. Business cheat : SHYSTER
Shyster is American slang for an unscrupulous lawyer, and is probably an alteration of the German word “Scheisser” meaning an incompetent and worthless person. “Scheisser” derives from an even less complimentary term “Sheisse”, the German for …. well, I won’t say it. But I will say as an aside that one of my son’s school friends told me one time that he didn’t really hold with the “Thank God It’s Friday” philosophy (TGIF), and was more into “So Happy It’s Thursday” … you can work it out …

18. Keyboard key : TAB
Like most features on our computer keyboards, the tab key is a hangover from the days of typewriters. When using a typewriter, making entries into a table was very tedious as it involved lots of tapping on the space bar and backspace key. So a lever was added to typewriters that allowed the operator to “jump” across the page to positions that could be set by hand. Later this was simplified to a tab key which could be depressed, causing the carriage to jump to the next tab stop in much the same way that the modern tab key works on a computer.

22. Michael who starred in 39-Down : CAINE
(39. “The ___ File,” 1965 film : IPCRESS)
There have been only two actors who have been nominated for an Academy Award in every decade from the 1960s to the 2000s. One is Jack Nicholson, and the other is Michael Caine. Caine is now known as Sir Michael Caine, as he was knighted by Queen Elizabeth II in the year 2000.

31. Elevator background : MUZAK
“Muzak” is a proprietary name for piped music, apparently a blend of the words “music” and “Kodak”. The Muzak system was developed way back in 1922 and was  first used in workplaces.

37. Longhorn’s school, informally : TEXAS
The Texas Longhorns are the sports teams of the University of Texas at Austin.

39. “The ___ File,” 1965 film : IPCRESS
I used to walk my dog right past author Len Deighton’s house years ago, as we lived in the same village in Ireland (probably my only claim to fame!). Deighton wrote the excellent espionage thriller “The IPCRESS File”, made into a 1965 movie starring Michael Caine.

40. Flower part : COROLLA
The collective name for all the petals of a flower is the “corolla”.

44. One way to serve pie : A LA MODE
In French, à la mode simply means “fashionable”. In America it has come to describe a way of serving pie, usually with ice cream, or as I recall from when I lived in Upstate New York, with cheese.

51. Eminem rap with the lyric “Guarantee I’ll be the greatest thing you ever had” : SO BAD
Eminem’s real name is Marshall Mathers, a native of Saint Joseph, Missouri. He grew up poor, raised by a single-mom as the family was abandoned by his father when he was 18 months old. Marshall and his mother moved around the country before settling in a suburb of Detroit. He didn’t do well at school, and dropped out at the age of 17. But in the end he made it pretty big …

52. Computer option : MOUSE
The first computer mouse was invented at the Stanford Research Institute in 1963, by one Douglas Englebert. Sadly for him, his patent ran out before mice became standard equipment on computers, so he never made any money from his amazing invention.

55. Onetime feminist cause, for short : ERA
The Equal Rights Amendment (ERA) was written by the American suffragist leader, Alice Paul. Although Paul was successful in her campaign to get passage of the 19th Amendment to the US Constitution (guaranteeing voting rights regardless of sex), her 1923 Equal Rights Amendment didn’t make it to the Senate floor until 1972. The amendment was passed by the Senate, and then headed to the state legislatures for the required ratification. 38 states had to approve the legislation for the amendment to be adopted, but only 35 states voted in favor before the deadline. So the amendment is still pending, although about half of the fifty states have adopted the ERA into their state constitutions.