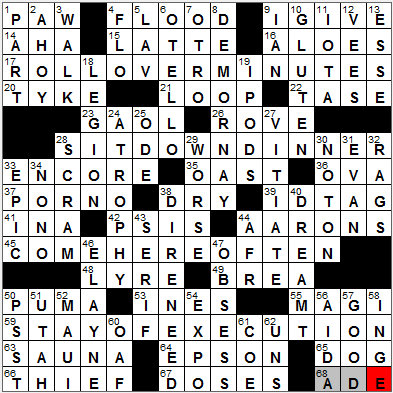 CROSSWORD SETTER: Keith Talon
THEME: GOOD DOG … all the theme answers start with commands given to a dog:

15. Caffè ___ : LATTE
The name latte is an abbreviation of the Italian “caffelatte” meaning “coffee (and) milk”. Note that in the correct spelling of “latte”, the Italian word for milk, there is no accent over the “e”. An accent is often added by mistake when we use the word in English, perhaps meaning to suggest that the word is French.

16. Healing plants : ALOES
Aloe vera has a number of alternate names that are descriptive of its efficacy as a medicine. These include the First Aid plant, Wand of Heaven, Silent Healer and Miracle Plant.

20. Youngster : TYKE
“Tyke” has been used playfully to describe a young child since at least 1902, but for centuries before that a tyke was a cur or mongrel, or perhaps a lazy or lower-class man.

22. Stun, as with a police gun : TASE
Victor Appleton wrote a novel for young adults called “Tom Swift and His Electric Rifle”. The company that developed the TASER electroshock weapon, named their product as a homage to the novel, as TASER stands for Thomas A. Swift’s Electric Rifle. Interesting, eh?

23. British lockup : GAOL
Both “jail” and “gaol” are pronounced the same way, mean the same thing and are rooted in the same Latin word for “cave”. The spelling “gaol” is seen quite often in the UK, although it is gradually being replaced with “jail”. The “gaol” spelling has Norman roots and tends to be used in Britain in more formal documentation.

35. Hops kiln : OAST
An oast is a kiln used for drying hops as part of the brewing process. It might also be called an “oast house”.

39. What a soldier wears that has a serial no. : ID TAG
The identification tags worn by soldiers are often called “dog tags”, simply because they do resemble tags worn by dogs. US military personnel are required to wear dog tags when in the field. Each soldier wears either two tags or a special tag that breaks easily into two identical pieces. The idea is that if a soldier is killed then one half can be removed for notification and the remaining half stays with the body. Each tag contains basics such as name and ID number, medical information like blood type, and possible a religious preference.

42. Letters before omegas : PSIS
The Greek letter psi is the one that looks a bit like a trident or a pitchfork.

44. Hammerin’ Hank and others : AARONS
The great Hank Aaron has many claims to fame. One notable fact is that he is the last major league baseball player to have also played in the Negro League.

48. Instrument for a Muse : LYRE
In Greek mythology, the muses are the goddesses who inspire the creation of literature and the arts. The number of muses is a subject of debate at times, but the most popular view is that there are nine:

49. La ___ Tar Pits : BREA
The La Brea Tar Pits are located right in the heart of the city of Los Angeles. At the site there is a constant flow of tar that seeps up to the surface from underground, a phenomenon that has been around for tens of thousands of years. What is significant at La Brea is that much of the seeping tar is covered by water. Over many, many centuries animals came to the water to drink and became trapped in the tar as they entered the water to quench their thirst. The tar then preserved the bones of the dead animals. Today a museum is located right by the Tar Pits, recovering bones and displaying specimens of the animals found there. It’s well worth a visit if you are in town …

53. Chemical suffixes : -INES
The suffix -ine is common in the world of chemistry. Examples are:

55. Three Wise Men : MAGI
Magi is the plural of the Latin word “magus”, a term applied to someone who was able to read the stars. Hence, magi is commonly used with reference to the “wise men from the East” who followed the star and visited Jesus just after he was born.

63. Finnish bath : SAUNA
As my Finnish-American wife will tell you, “sauna” is a Finnish word, and is pronounced “sow-nah” (with “sow” as in the female pig).

64. Big name in printers : EPSON
Seiko Epson is a Japanese company, one of the largest manufacturers of printers in the world. The company has its roots in the watch business, roots that go back to 1942. Seiko was chosen as the official time keeper for the 1964 Summer Olympics in Tokyo and was asked to supply a timer that produced a printed record. This request brought Seiko into the business of printer production. The company developed the world’s first mini-printer for the Games and called it EP-101 (EP standing for Electronic Printer). In 1975 Seiko introduced the next generation of EP printers which was called EPSON, from “SON of EP”. Cute, huh?

66. Person who uses the “five-finger discount” : THIEF
“Five-finger discount” is a relatively recent slang expression, dating back to 1966. It is slang for “theft”, the idea being that someone using their five fingers to steal something gets the best of all discounts on the price, namely 100%.

4. Pop music’s ___ & Eddie : FLO
Flo & Eddie were the original founding members of the Turtles rock group, even though they were actually a comedic musical duo. Flo’s real name is Mark Volman, and Eddie is Howard Kaylan.

5. Restroom, informally : LAV
Our word “lavatory” originally referred to a washbasin, and comes from the Latin “lavatorium”, a place for washing. In the 1600s a lavatory became a washroom, and in the 1920s a toilet.

6. Verdi opera : OTELLO
Giuseppe Verdi’s opera “Otello” was first performed in 1887 at the La Scala Theater in Milan. It is based on Shakespeare’s “Othello” and is considered by many to be Verdi’s greatest work.

8. Actress Rebecca : DE MORNAY
The actress Rebecca De Mornay made a name for herself playing the lead opposite a young Tom Cruise in 1983’s “Risky Business”. After filming the movie, Cruise and De Mornay lived together for a while in New York. For me her most memorable role was that of the evil nanny in “The Hand That Rocks the Cradle”.

9. Novelist Fleming : IAN
Ian Fleming is most famous of course for writing the “James Bond” series of spy novels. You might also know that he wrote the children’s story “Chitty Chitty Bang Bang”, which was made into a cute movie released in 1968 and even a stage musical that opened in 2002.

10. Substance in wheat flour : GLUTEN
Gluten is a protein mixture found in foods processed mainly from wheat. The sticky properties of gluten are used in making bread, giving dough its elasticity and making the final product very chewy. “Gluten” is the Latin word for “glue”.

11. Minuscule amount : IOTA
Iota is the ninth letter in the Greek alphabet. We use “iota” to portray something very small, as it is the smallest of all Greek letters.

12. Flying geese formations : VEES
Apparently geese fly in that V-formation for a couple of reasons. One is that it makes for efficient flight and conserves energy. The leading bird gets no advantage, but every following bird gets to “slipstream” a little. It has been noted that the lead bird drops to the back of the formation when he/she gets fatigued. It’s also thought that the flock can stick together more easily when in formation, so it is more difficult to lose someone along the way.

18. American ___ (veterans’ group) : LEGION
The American Legion was formed in 1919 by WWI veterans returning after the Great War. The man who first suggested founding the group was Theodore Roosevelt, Jr., son of President Theodore Roosevelt and himself a veteran of the American Expeditionary Force that served in Europe.

19. Apple devices with earbuds : IPODS
The iPod is Apple’s signature line of portable media players. It first hit the market in 2001 in the form of a hard drive-based device now known as the iPod Classic. Later models all use flash memory, allowing a smaller form factor.

25. “___ to a Nightingale” : ODE
John Keats is famous for writing a whole series of beautiful odes. The most famous are the so-called “1819 Odes”, a collection from the year 1819 that includes famous poems such as “Ode on a Grecian Urn”, “Ode to a Nightingale” and “Ode to Psyche”.

27. Impair the quality of : VITIATE
“To vitiate” something is to reduce its quality. “Vitiate” comes from the Latin “vitium” meaning “fault”.

31. 2007 film “___ Almighty” : EVAN
Steve Carell’s “Evan Almighty” was actually a sequel, to Jim Carrey’s “Bruce Almighty”. “Evan Almighty” is a cute enough film, with Evan mutating into a Noah character who goes as far as building an ark in his front yard.

43. Letter flourish : SERIF
Serifs are details on the ends of characters in some typefaces. Typefaces without serifs are known as sans-serif (using the French word “sans” meaning “without”). Some people say that serif fonts are easier to read on paper, whereas sans-serif fonts work better on a computer screen. I’m not so sure though …

44. Where Nigeria is: Abbr. : AFR
Nigeria is in West Africa, and it takes its name from the Niger River which flows through the country. Nigeria is the most populous country on the continent.

46. Comic Boosler : ELAYNE
Elayne Boosler is a stand-up comedian, and was one of the first female comedians to have her act aired as a special on cable television. She does have some funny lines. Here’s one that I particularly like:

“When women are depressed they either eat or go shopping. Men invade another country.”

52. Hawaiian island : MAUI
Maui is the second largest of the Hawaiian islands. Maui is sometimes called the “Valley Isle” as it is composed of two volcanoes to the northwest and southeast of the island, each with numerous, beautiful valleys carved into them.

56. Verdi opera : AIDA
“Aida” is the famous opera by Giuseppe Verde, actually based on a scenario written by a French Egyptologist Auguste Mariette. Mariette also designed the costumes and stages for the opening performance. The opera was first staged in 1871 in an opera house in Cairo. In the storyline Aida is an Ethiopian princess brought into Egypt as a slave. Radames is an Egyptian commander that falls in love with her, and then of course complications arise!

58. Playwright William : INGE
Playwright William Inge had a run of success on Broadway in the early fifties. His most celebrated work of that time was the play “Picnic”, for which he was awarded a Pulitzer Prize. The original 1953 cast of “Picnic” included a young male actor making his debut on Broadway, by the name of Paul Newman.