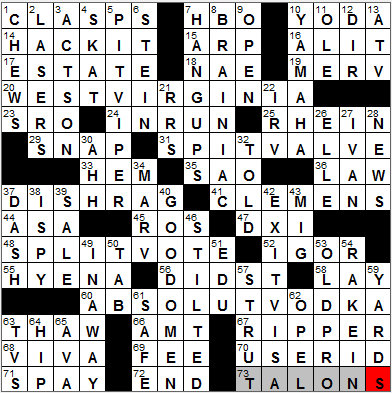 CROSSWORD SETTER: Patrick Merrell
THEME: TVs … most of the theme answers are made up of two words, one ending in T and the other starting with V, so the theme answer has a TV “hidden” in it:

7. “Entourage” cable channel : HBO
I haven’t seen the HBO series “Entourage”, but will have to take a look one day as I am a huge fan of HBO productions. “Entourage” is the story of a young movie star from New York City learning about life in Los Angeles. The show is co-produced by the actor Mark Wahlberg and so the storyline is somewhat biographical, based on a few of Wahlberg’s own experiences.

10. Talks like this in “Star Wars” films he does : YODA
Yoda is one of the most beloved characters in the “Star Wars” series of films. Yoda’s voice was provided by the great modern-day puppeteer Frank Oz of “Muppets” fame.

15. Dada artist Jean : ARP
Hans Arp was a French artist, renowned for his work with torn and pasted paper, although that wasn’t the only medium he used. He was the son of a French mother and German father, and spoke both languages fluently. When he was speaking German, he gave his name as Hans Arp, but when speaking French, he called himself Jean Arp. Both “Hans” and “Jean” translate into English as “John”. In WWI Arp moved to Switzerland to avoid being called up to fight, taking advantage of Swiss neutrality. Eventually he was told to report to the German Consulate and fill out paperwork for the draft. In order to get out of fighting, Arp messed up the paperwork by writing in the date in every blank space on the forms. Then he took off all his clothes and walked with his papers over to the officials in charge. He was sent home …

19. Griffin who created “Wheel of Fortune” : MERV
Merv Griffin was quite the entertainer, truly a mogul in the business. He started his career as a singer on the radio during the big band era. In the sixties he hosted his own talk show, and then famously developed such great game shows as “Jeopardy!” and “Wheel of Fortune”.

20. Charleston is its capital : WEST VIRGINIA
The state capitol of West Virginia is the city of Charleston. The city started out as the settlement of Fort Lee in 1787, founded by Colonel George Clendenin of the Virginia Rangers. It is speculated that the name change, first to Charles Town and then to Charleston, was in honor of Col. Clendenin’s father, whose name was Charles.

23. “All seats have been sold” sign : SRO
Standing Room Only.

24. First part of a ski jump : INRUN
In ski jumping, “inrun” is the name given to the long ramp down which skiers gather speed prior to making the jump.

25. Longest river in Deutschland : RHEIN
The river running through Germany that we know in English as the Rhine, is called “Rhein” in German.

29. ___, Crackle and Pop : SNAP
The three elves Snap, Crackle and Pop are the mascots for Kellogg’s Rice Krispies. They first appeared in an ad campaign in 1933, although the phrase “snap, crackle and pop” had been used for the cereal before then in radio commercials. By the way, instead of Rice Krispies, the elves promote “Rice Bubbles” in Australia, and the elves are called “Cric!, Crac! and Croc! in Quebec.

31. Trumpet’s saliva-draining key : SPIT VALVE
The spit valve is a tap on a musical instrument such as a trombone and trumpet, and is used to allow the drainage of accumulated fluid. It is more commonly known as the water key.

35. ___ Paulo, Brazil : SAO
São Paulo is the largest city in Brazil. It is also the city with the highest number of helicopters in the world. This is partly driven by the horrendous traffic jams in São Paulo, but also by the wealthy having a very real fear of being kidnapped on the city streets.

36. Perry Mason’s field : LAW
I must have read all of the Perry Mason books when I was in college. I think they kept me sane when I was facing the pressure of exams. Author Erle Stanley Gardner was himself a lawyer, although he didn’t get into the profession the easy way. He went to law school, but got himself suspended after a month. So, he became a self-taught attorney and opened his own law office in Merced, California. Understandably, he gave up the law once his novels became successful.

41. Samuel Langhorne ___ : CLEMENS
Samuel Langhorne Clemens was the real name of the author Mark Twain. Twain wasn’t the only pen name used by Clemens. Early in his career he signed some sketches as “Josh”, and signed some humorous letters that he wrote under the name “Thomas Jefferson Snodgrass”. The name of Mark Twain came from the days when Clemens was working on riverboats on the Mississippi. A riverboatman would call out “by the mark twain” when measuring the depth of water. This meant that on the sounding line, according to the “mark” on the line, the depth was two (“twain”) fathoms, and so it was safe for the riverboat to proceed.

45. Author Asquith of children’s books : ROS
Ros Asquith writes the “Teenage Worrier” books aimed at teens, as well as cartoons for “The Guardian” newspaper in the UK.

60. Swedish liquor with memorable ads : ABSOLUT VODKA
I must admit, if I ever do order a vodka drink by name, I will order the Absolut brand. I must also admit that I do so from the perspective of an amateur photographer, because I’ve been swayed by the Absolut marketing campaign that features such outstanding photographic images. I’m sure you’ve come across examples …

67. Jack the ___ : RIPPER
Jack the Ripper was one of the names given to a serial killer who terrorized the Whitechapel district of London in 1888. The murders were particularly gruesome, and were all directed at female prostitutes that worked the area. The victims had their throats cut and then had their abdominal organs mutilated and sometimes removed. Eleven women were killed, and the murderer was never apprehended.

68. Elvis’s “___ Las Vegas” : VIVA
“Viva Las Vegas” is an Elvis Presley movie released in 1964, considered to be one of his best films. The good reception for the movie was at least in part due to the performance of the female lead, Ann-Margret.

4. 32-card game : SKAT
When I was a teenager in Ireland, I had a friend with a German father. The father taught us the game of Skat, and what a great game it is. It originated in Germany in the 1800s and is to this day the most popular game in the country. I haven’t played it in decades, but would love to play it again …

5. Venomous snake : PIT VIPER
Pit vipers are a subfamily of vipers, so called because they all possess “pits”, deep depressions on either side of the head, between the nostril and the eye. These pits are openings to heat sensitive organs that give the snake an ability to detect a prey using its heat signature.

6. Oktoberfest vessel : STEIN
Oktoberfest is a 16-day beer festival in Munich that actually starts in September. About six million people attend every year, making it the largest fair in the world. I’ve been there twice, and it really is a great party …

10. Japanese motorcycle maker : YAMAHA
The Japanese company Yamaha started out way back in 1888 as a manufacturer of piano and reed organs. Even though the company has diversified since then, Yamaha’s logo still reflects it musical roots. Even on Yamaha motorcycles you can see a logo made up of three intersecting tuning forks.

21. Four Monopoly properties: Abbr. : RRS
The commercial game of Monopoly is supposedly a remake of “The Landlord’s Game” created in 1903 by a Quaker woman called Lizzie Phillips who used it as a tool to explain the single tax theory of American economist Henry George. The Landlord’s Game was first produced commercially in 1924. The incredibly successful derivative game called Monopoly was introduced in 1933 by Charles Darrow, and he became quite a rich man when Parker Brothers bought the rights to the game just two years later in 1935.

22. Chicago columnist Kupcinet : IRV
Irv Kupcinet was a newspaper columnist for the Chicago Sun-Times. He wrote “Kup’s Column” for six decades starting in 1943. Kupcinet was also a broadcaster, and in 1957 replaced Jack Paar on what would eventually become “The Tonight Show”.

27. ___ the Terrible : IVAN
The Grand Prince of Moscow, Ivan IV, became known as Ivan the Terrible. The name “terrible” is a translation from Russian, and perhaps creates the wrong impression about the man. The Russian word is “Grozny”, which is more akin to “strict” and “powerful” rather than “cruel” or “abominable”.

28. What literally comes from the north, east, west and south? : NEWS
NEWS is an acronym from North East West South.

34. Sportscaster Albert : MARV
Marv Albert is television and radio sportscaster, often referred to as “the voice of basketball”. Marv has two younger brothers who are also sports announcers, and his son Kenny calls baseball and football for New York Rangers games on FOX radio. In addition, his daughter is a reporter for NBA TV.

37. Bit of Morse code : DASH
Samuel Morse was a very accomplished and reputable painter (he was engaged to paint a portrait of President John Adams, for example). In 1825 he was in Washington working on a commissioned painting when he received a one-line letter by horse messenger telling him that his wife was ill. He left immediately for his home in New Haven, Connecticut but by the time he arrived she had already died and had been buried. This single event spurred him to move from painting to the development of a rapid means of long distance communication, leading to the single-wire telegraph and Morse code.

50. Indenting key : TAB
Like most features on our computer keyboards, the tab key is a hangover from the days of typewriters. When using a typewriter, making entries into a table was very tedious, involving lots of tapping on the space bar and the backspace key. So a lever was added to typewriters that allowed the operator to “jump” across the page to positions that could be set by hand. Later this lever was simplified to a tab key which could be depressed, causing the carriage to jump to the next tab stop in much the same way that the modern tab key works on a computer.

62. German car : OPEL
Adam Opel founded his company in 1863, first making sewing machines in a cowshed. Commercial success brought new premises and a new product line in 1886, namely penny-farthing bicycles. Adam Opel died in 1895, leaving his two sons with a company that made more penny-farthings and sewing machines than any other company in the world. In 1899 the two sons partnered with a locksmith, and started to make cars, but not very successfully. Two years later, the locksmith was dropped in favor of a licencing arrangement with a French car company. By 1914, Opel was the largest manufacturer of automobiles in Germany. My Dad had an Opel in the seventies, a station wagon (we’d say “estate car”) called an Opel Kadett.

65. Palindromic girl : AVA
The three most famous palindromes in English are:

One of my favorite words is “Aibophobia”, although it doesn’t appear in the dictionary and is a joke term. It is a great way to describe a fear of palindromes, by creating a palindrome out of the suffix “-phobia”. I would call it a “real” word though in one sense, as it was introduced in the early eighties and has been around ever since.