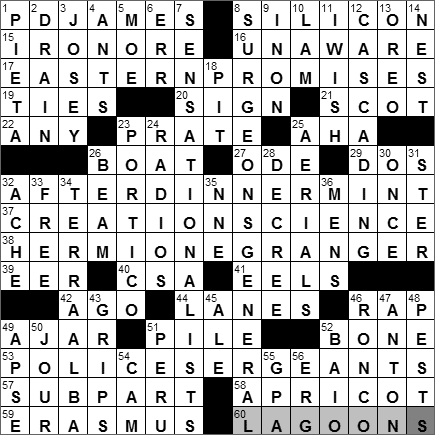 1. “The Children of Men” author : P. D. JAMES
P. D. James is an incredibly successful English author of crime fiction, with her most famous books being a series that features a policeman and sometime poet, Adam Dalgliesh. James’ 1992 novel called “The Children of Men” was adapted into a 2006 movie (“Children of Men”) starring Clive Owen and Julianne Moore. It tells of a world that develops after two generations of human infertility.

15. Resource of western Australia : IRON ORE
Iron ore comes in a number of different forms, like magnetite (the most magnetic of all minerals) and hematite (the most commonly exploited iron ore).

17. 2007 film featuring a heavily tattooed main character : EASTERN PROMISES
“Eastern Promises” is a movie thriller released in 2007. It stars Naomi Watts as a British midwife who comes into contact with a member of the Russian mafia, played by Viggo Mortenson. Mortenson’s character wears some pretty scary and authentic-looking Russian mafia tattoos.

21. Native of Ayr : SCOT
Ayr is a port town on the Firth of Clyde in southwest Scotland. The famous poet Robert Burns was born just three miles from Ayr.

23. Gab : PRATE
To prate is to talk idly and at length, a word that comes to us from Middle Dutch “praten”, meaning to talk or chatter.

27. Wordsworth’s “Intimations of Immortality,” e.g. : ODE
The great English poet William Wordsworth lived in the Lake District in the north of England, a beautiful part of the country. I’ve been fortunate enough to visit Dove Cottage in Grasmere a couple of times, where Wordsworth lived with his wife, Dorothy.

37. Field of Bible-based study : CREATION SCIENCE
Creation science is the search for scientific underpinnings to the narrative of creation as described in the Book of Genesis.

38. Hogwarts enrollee : HERMIONE GRANGER
Emma Watson is the English actress famous for playing Hermione Granger in the “Harry Potter” movies. Watson is continuing her education while pursuing her acting career, and is currently enrolled at Brown University in Providence, Rhode Island.

39. Always used by Longfellow? : E’ER
Henry Wadsworth Longfellow was famous for his own work of course, like “Paul Revere’s Ride” and “The Song of Hiawatha”, but he was also the first American to translate Dante’s epic poem, the “Divine Comedy”.

40. Grp. represented by the Southern Cross : CSA
The Confederate States of America set up government in 1861 just before Abraham Lincoln took office. Jefferson Davis was selected as President of the CSA at its formation and retained the post for the life of the government.

41. Deep shockers : EELS
Electrophorus electricus is the biological name for the electric eel. Despite its name, the electric “eel” isn’t an eel at all, but rather what is called a knifefish, a fish with an elongated body related to the catfish. The electric eel has three pairs of organs along its abdomen, each capable of generating an electric discharge. The shock can go as high as 500 volts with 1 ampere of current (that’s 500 watts), and that could perhaps kill a human.

49. Openable with a gentle push, say : AJAR
Our word “ajar” is thought to come from Scottish dialect, in which “a char” means “slightly open”.

58. Kind of jam in a sacher torte : APRICOT
Sachertorte is a chocolate cake from Austria. It was specifically created in 1832 when Prince Metternich commanded his personal chef to prepare a dessert for some special guests. But his head chef became ill so the task fell to 16-year-old Franz Sacher, an apprentice in the kitchen. That teenager’s dessert is now one of Austria’s most famous dishes.

1. Only work of art that Michelangelo signed : PIETA
Michelangelo’s Pietà can be seen in St. Peter’s Basilica in the Vatican. Like all images known as the Pietà, the sculpture depicts the Virgin Mary cradling the dead body of Jesus. Michelangelo inscribed his signature along a sash worn by the Virgin, the only time he is known to have signed his work.

3. “The Outlaw ___ Wales” : JOSEY
“The Outlaw Josey Wales” is a 1976 movie directed by Clint Eastwood, with Eastwood also playing the title role.

5. Bully in “Calvin and Hobbes” : MOE
The comic strip “Calvin and Hobbes” is still widely syndicated, but hasn’t been written since 1995. The cartoonist Bill Watterson named the character Calvin after John Calvin, the 16th century theologian. Hobbes was named for Thomas Hobbes a 17th century English political philosopher.

10. Skip town : LAM
To be “on the lam” is to be in flight, to have escaped from prison. It is American slang that originated at the end of the 19th century. The word “lam” also means to “beat” or “thrash”, as in “lambaste”. So “on the lam” might derive from the phrase “to beat it”, to scram.

26. Cantilever, e.g. : BEAM
A beam designated as a cantilever is one that is supported on only one end.

34. Clay used by potters : TERRA ALBA
Terra alba (Latin for “white earth”) is a finely pulverized gypsum. It is used as a clay to make ceramics, and as a pigment for paper and paints.

43. Film set workers : GRIPS
On a film set, grips are the lighting and rigging technicians, with the key grip being the name given to the leader of the whole team. The first “grips” were technicians that worked in the circus in its early days. The name “grip” possibly comes from the bags, or grips. in which the technicians carried their tools.

46. “But wait, there’s more!” company : RONCO
Ronco is a company the builds and sells products mainly for the kitchen. Over the years the company has been closely associated with the “-O-Matic” suffix, especially the “Veg-O-Matic” vegetable slicer.

47. Composer Bruckner : ANTON
Anton Bruckner was an Austrian composer, not a favorite of mine as he embraces the use of dissonances (I’m a sober traditionalist!). His Symphony No. 7 is perhaps his most popular work. He created a slow, mournful movement in recognition of the impending death of Richard Wagner, whom he greatly admired.

49. Place to pray : APSE
The apse of a church or cathedral is a semicircular recess in an outer wall, usually with a half-dome as a roof, and often where there resides an altar. Originally, apses were used as burial places for the clergy and also for storage of important relics.

51. Where the 2003 true-life film “Touching the Void” is set : PERU
“Touching the Void” is a 1988 book and a 2003 documentary film about an ascent of the Siula Grande mountain in the Peruvian Andes. The pair who made the climb reached the summit successfully, the first to do so via the mount’s West Face. However, on the descent one of the climbers fell and broke his leg. There followed disaster after disaster, and the two were separate, and miraculously lucky to return to the base of the mountain alive.

52. Actor Scott : BAIO
Scott Baio is the actor who played Chachi Arcola in the great sitcom “Happy Days” and in the not so great spin-off “Joannie Loves Chachi”. He also played the title role in a later sitcom, “Charles in Charge”. Earlier in his career, Baio played another title role, in the 1976 movie “Bugsy Malone”, appearing opposite a young Jodie Foster.