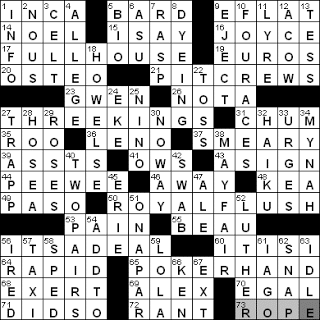 THEME: POKER HANDS … each of the theme answers is a hand in poker i.e. FULL HOUSE, THREE KINGS, ROYAL FLUSH, TWO PAIRS, FOUR ACES (and I guess IT’S A DEAL might qualify too!).
COMPLETION TIME: 7m 52s
ANSWERS I MISSED: 0

1. Native encountered by Pizarro : INCA
The Inca people emerged as a tribe around the 12th century, in what today is southern Peru. The Incas developed a vast empire over the next 300 years, extending along most of the western side of South America. The Empire of course fell to the Spanish, finally dissolving in 1572 with the execution of Tupac Amaru, the last Incan Emperor.

5. Shakespeare, with “the” : BARD
William Shakespeare is known as the Bard of Avon, as he was born and raised in the lovely town of Stratford-upon Avon.

14. “Silent Night” or “Away in a Manger” : NOEL
Noel is the French word for the Christmas season, ultimately coming from the Latin word for “birth”, “natalis”. Noel has come to be used as an alternative name from a Christmas carol.

16. Novelist ___ Carol Oates : JOYCE
Joyce Carol Oates is a remarkable writer, not just for the quality of her work (her 1969 novel “them” won a National Book Award, for example) but also for how prolific is her output. She published her first book in 1963 and since then has published over fifty novels as well as many other written works.

In early versions of poker, straights and flushes had no value as the game was focused on two, three, four-of-a-kind etc. Two-of-a-kind and three-of-a-kind in the same hand was “special” in those days as it was the only hand in which all five cards were of value. This hand was therefore called a “full” hand, which eventually became a “full house”.

19. Capital of more than 15 states : EUROS
The European Union today stands at a membership of 27 states. The Euro is the official currency of only 16 of those 27 states. The list of states not using the Euro include the UK, Denmark, Sweden and Norway.

23. Broadway singer/actress Verdon : GWEN
Gwen Verdon was one of Broadway’s biggest stars, an actress, singer and dancer. She is famous for playing Lola in the 1958 movie adaptation of “Damn Yankees, in which she sings the unforgettable “Whatever Lola Wants, Lola Gets”. Verdon’s second marriage was to the celebrated choreographer Bob Fosse.

27. *The Magi, e.g. : THREE KINGS
Magi is the plural of the Latin word “magus”, a term applied to someone who was able to read the stars. Hence, magi is commonly used with reference to the “wise men from the East” who followed the star and visited Jesus just after he was born.

35. Kanga’s little one : ROO
Kanga is a friend of Winnie-the-Pooh, a kangaroo. She is the mother of Roo, who appears more frequently in the storyline.

Like most of the characters in A. A. Milne’s “Winnie the Pooh”, Roo is based on one of his son’s (Christopher Robin Milne) stuffed toys.

36. O’Brien’s late-night predecessor and successor : LENO
Jay Leno is a car nut, and owns about 200 vehicles of various types. You can check them out on his website!

48. Mauna ___ : KEA
Mauna Kea is a dormant volcano on the Big Island of Hawaii, the peak of which is the highest point in the whole state. Mauna Kea is in effect the tip of a gigantic volcano rising up from the seabed. So, the real height of the volcano is over 33,000 feet, quite a bit higher than Mount Everest (at 29,029 feet).

49. ___ doble (Spanish dance) : PASO
The lively and dramatic dance called the pasodoble is very much associated with the Spanish bullfight, but in fact it originated in southern France. The dance is based on music that is played at bullfights when the bullfighters enter the arena, and when they close in for the kill. Not a big fan of bullfighting …

55. Boyfriend : BEAU
“Beau” is the French word for “beautiful”, in the male sense.

65. What the answer to each starred clue is : POKER HAND

69. The “A” in A-Rod : ALEX
Poor old Alex Rodriguez earned more nicknames that just A-Rod. He has been called “the Cooler” by some players as there is a perception that teams go cold when he joins them, and hot when he leaves. He has also been called “A-Fraud” by teammates because of another perception, that he is over-demanding.

70. Alike: Fr. : EGAL
“Egal” is the French word for “equal, alike”, and a word we sometimes use in English. The national motto of France is of course “Liberté, égalité, fraternité”, meaning “Liberty, equality, fraternity (brotherhood).

Down
1. Skinny : INFO
The use of the word “skinny” meaning information, comes from WWII military slang for “the truth”, probably a derivative of the expression “the naked truth” (and skinny-dipping).

3. Boston cager, briefly : CELT
In the early days of basketball, when a ball went out of bounds possession was awarded to the player who first retrieved the ball. This lead to mad scuffles off the court, often involving spectators. As the game became more organized, courts were routinely “caged” largely because of this out of bounds rule to limit interation with the crowd. So, basketball players are sometimes referred to as “cagers”. Quite sensibly, the out of bounds rule was changed …

6. Tempe sch. : ASU
Arizona State University has a long history, founded as the Tempe Normal School for the Arizona Territory in 1885.

10. *Group with the 1951 hit “Tell Me Why,” with “the” : FOUR ACES
The Four Aces are still going strong, and have been singing pop songs since the 1950s. Their big hits were “Love is a Many-Splendored Thing”, Three Coins in the Fountain”, “Stranger in Paradise” and “Tell Me Why”.

11. Orpheus’ instrument : LYRE
Orpheus is a figure from Greek mythology, very often associated with poetry, singing, music and the lyre in particular. In ancient Greece there was even an Orphic cult that in effect adopted the poetry ascribed to Orpheus as central to the cult’s belief system. The adjectives “Orphic” and “Orphean” describe things pertaining to Orpheus, and because of his romantic, musical bent, the term has come to mean something melodious or enchanting.

12. Have ___ (lose it) : A COW
The phrase “don’t have a cow” originated in the fifties, a variation of the older “don’t have kittens”. The concept behind the phrase is that one shouldn’t get worked up, it’s not like one is giving birth to a cow.

13. Thomas Hardy heroine : TESS
The full name of Thomas Hardy’s 1891 novel is “Tess of the d’Urbervilles: A Pure Woman Faithfully Presented”. When it was originally published, “Tess” received very mixed reviews, largely because it addressed some difficult sexual themes including rape, and sexual double standards (attitudes towards men vs women). I suppose the most celebrated screen adaption is Roman Polanski’s “Tess” released in 1979. Polanski apparently made “Tess” because his wife, Sharon Tate, gave him Hardy’s novel as her last act before she was murdered by the Manson family. There is a dedication at the beginning of the movie that just says “To Sharon”.

24. Barely make, with “out” : EKE
I believe that technically speaking one can’t actually “eke out” an existence, as to “eke out” means to “make something go further or last longer”. So, you can eke out your income by cutting back on expenses, but you can’t eke out your existence, or any existence.

27. “The Sound of Music” family name : TRAPP
“The Sound of Music” is a Rogers and Hammerstein musical, made into a celebrated movie in 1965 starring Julie Andrews and Christopher Plummer. The musical is based on “The Story of the Trapp Family Singers”, a memoir by Maria von Trapp. The von Trapp family ended up in Stowe, Vermont after the war, and one family descended from the Vermont von Trapps lives here in the same town in which I live in California.

32. Japanese verse form : HAIKU
A haiku is a very elegant form of Japanese verse. When writing a haiku in English we impose the rule that the verse must contain 17 syllables. This restriction comes from the rule in Japanese that the verse must contain 17 sound units called “moras”, but moras and syllables aren’t the same thing. What the difference is though, is not so clear to me …

33. Yens : URGES
The word “yen” meaning “urge” has been around in English since the very early 1900s. It comes from the earlier word “yin”, imported from Chinese, which was used in English to describe an intense craving for opium!

34. Talking bird : MYNAH
Some species of myna (also mynah) bird are known for their ability to imitate sounds.

38. Upscale London district : MAYFAIR
The ritzy area of Mayfair is in the City of Westminster in Central London. The city takes its name from a two-week long May Fair that took place in the area back in the 1600s. Paradoxically, as the area became more wealthy, the elite residents had the fair moved away as they deemed that it lowered the tone of the neighborhood. As an aside, in the UK version of the board game Monopoly, the streets used are all in London, with Mayfair being the most expensive priced at 400 pounds (so, equivalent to the US version’s Boardwalk).

47. Sam Adams product : ALE
Sam Adams beers are named in honor of the American patriot who played a role in the American Revolution and the Boston Tea Party. Samuel Adams came from a family associated the brewing industry, mainly involved in the production of malt.

52. Writer of “The 95 Theses” : LUTHER
Martin Luther wrote his “95 Theses on the Power and Efficacy of the Indulgences” in 1517, a document that is often seen as the spark that set off the Protestant Reformation. Luther’s main argument was that the Catholic Church’s practice of granting “indulgences”, forgiveness from punishment for sins, was wrong, in particular when the such indulgences were granted in exchange for money.

59. Role for 23-Across in “Damn Yankees” : LOLA
23. Broadway singer/actress Verdon : GWEN
Gwen Verdon played Lola in the 1958 movie “Damn Yankees”. The film was released as “What Lola Wants” in the UK, to avoid putting the word “Damn” on movie posters and cinema fronts.

61. Shakespearean schemer : IAGO
Iago is the schemer in Shakespeare’s “Othello”. Iago is a soldier who fought alongside Othello and feels hard done by, missing out on promotion. His rival is Cassio, and Iago hatches a plot to discredit him, which creates mayhem, jealousy and violence before Iago is finally exposed for his true character.

66. Novelist Kesey : KEN
Ken Kesey wrote the novel “One Flew Over the Cuckoo’s Nest”. He was part of a group of friends that called themselves the “Merry Pranksters”, a bunch of guys that were associated with the likes of Jack Karouac, Allen Ginsberg and Timothy Leary, icons of the Beat Generation.