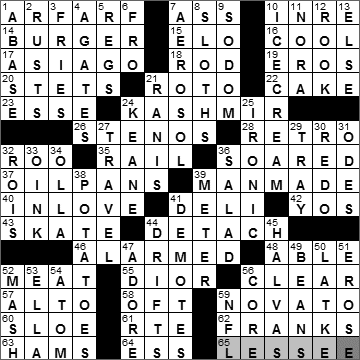 THEME: Eat & Eat … all the theme answers are pairs of answers that cross each other, and when joined with the word “and” make up common “pairs of foods” i.e. BURGER & FRIES, CAKE & ICE CREAM, MEAT & POTATOES, FRANKS & BEANS
COMPLETION TIME: 20m 14s
ANSWERS I MISSED: 0

Across
7. Nincompoop : ASS
The word “nincompoop” meaning an “ass” seems to have been around for quite a while, since the 1670s, but no one appears to know its origins.

15. “Xanadu” grp. : ELO
ELO of course stands for the Electric Light Orchestra, a symphonic rock group from the north of England. Their manager was Don Arden, father of Sharon Osbourne (wife of Ozzy).

The title song of the 1980 movie “Xanadu” was performed by ELO and Olivia Newton-John (who starred in the film). Despite the popularity of ELO around the world, the song “Xanadu” was the band’s only number one hit back in their homeland of the UK.

17. Italian cheese that’s often grated : ASIAGO
Asiago is a crumbly cheese, named after the region in northeastern Italy where it originates.

19. Greek god with a bow and arrow : EROS
As always seems to be the case, the Greek gods Eros and Aphrodite have overlapping spheres of influence. Aphrodite was the goddess of love between a man and a woman, but Eros was the god who stirred the passions of the male.

20. Editors’ marks meaning “put back in” : STETS
“Stet” is the Latin word meaning “let it stand”. In editorial work, the typesetter is instructed to disregard any change previously marked by writing the word “stet” beside the change and then underscoring the change with a line of dots (or dashes).

21. Commercial lead-in for Rooter : ROTO
The “Roto-Rooter” is an invention of Samuel Oscar Blanc. Blanc came up with the idea in 1933 after having to deal with a sewer line in his son’s apartment that was blocked with roots from a tree, a common problem. He put together his first version of the device using a washing machine motor, roller skate wheels and a steel cable. The “rotating rooter” snaked down the sewer line, and rotating blades at the tip of the cable cut though the troublesome roots. Blanc sold his machine for decades to people who set up their own drain clearing businesses. In 1980 the Blanc family sold the Roto-Rooter company to a Cincinnati concern that started buying up independent franchises that used the Roto-Rooter, creating the national service with which we are familiar today. Oh, and my advice is, save yourself the cost of the service call and just rent a machine. That’s what I do …

24. Disputed region between Pakistan and India : KASHMIR
Kashmir is a vast region in the northwest of the Indian sub-continent. Kashmir has a long and rich history, but the year that is most significant today is perhaps 1947. In that year, Britain pulled out of the Indian sub-continent and divided the Indian Empire into the independent countries of India and Pakistan, leaving the Maharajah ruling Kashmir free to join either India or Pakistan. When the Kashmiri Maharajah wavered in his decision, Pakistani forces advanced into Kashmir, prompting the the Maharajah to turn to India for assistance. India did indeed help, but only on condition that Kashmir accede to India. India then called in the United Nations to intercede, but no definitive solution was found that brought peace to the region. There has been conflict there ever since.

26. Office transcribers : STENOS
Stenography is the process of writing in shorthand. The term comes from the Greek “steno” (narrow) and “graphe” (writing).

40. Smitten : IN LOVE
“Smitan” is an Old English word meaning “to hit, strike”. Since the 1660s we’ve been describing someone who is “inspired with love”, or struck by Cupid’s arrow perhaps, as being “smitten”.

41. What may have the makings of a hero? : DELI
“Hero” is another name for a submarine sandwich. The hero originated in New York City in the 1800s among Italian immigrants who wanted an Italian sandwich that reminded them of home. The name “hero” was first coined in the 1930s, supposedly by a food critic in the New York Herald Tribune when he wrote that one had to be a hero to finish the gigantic sandwich. Hero is a prevalent term to this day in New York City, reserved for a submarine sandwich with an Italian flavor.

42. Calls from Rocky : YOS
You might remember Rocky Balboa saying, “Yo, Adrian!” in the original Rocky movie. Adrian was played by the lovely Talia Shire, the sister of director Frances Ford Coppola.

43. Foot gear for an N.H.L.’er : SKATE
Players in the National Hockey League wear skates, I hear.

55. Christian in fashion : DIOR
Christian Dior was a French fashion designer. As WWII approached, Dior was called up by the French military, drawing a temporary halt to his career in fashion. He left the army in 1942, and for the duration of the war designed clothes for the wives of Nazi officers and French collaborators. After the war his designs became so popular that he helped reestablish Paris as the fashion center of the world.

57. Chorister’s voice : ALTO
In choral music, alto is the second-highest voice in a four-part chorus: soprano, contr(alto), tenor, bass. The word “alto” describes a vocal range, that of the deepest, female singing-voice. The term “contralto” describes a voice with an alto range, but also its quality and timbre. A male (not a boy) voice with the same range as an alto is called a “countertenor”.

59. City north of San Francisco : NOVATO
The city of Novato lies about 30 miles north of San Francisco, on route 101. The area was settled originally by Coast Miwok Native Americans. Under the influence of the Spanish, one of the Miwok leaders was likely given the name Novatus (after the saint) at his baptism. This name was used for a huge ranch in the area, Rancho Novatus, established under the auspices of the Mexican government in 1839. Over time, the community that developed nearby took on the name Novato.

60. Gin flavoring : SLOE
The sloe is the fruit of the blackthorn bush, and is the flavoring that gives gin its distinctive taste.

4. Playing marbles : AGATES
A playing marble made from agate, or a glass imitation, is called an agate. The agate leads to the marble having a banded appearance.

7. Spray type : AEROSOL
Strictly speaking, the term “aerosol” defines a suspension of either liquid droplets or solid particles in a gas. A good example of an aerosol  is smoke. We tend to use the word to describe what comes out of a spray can, even though the liquid droplets usually fall out of the gas and don’t say suspended.

8. Lazy people : SLOTHS
“Sloth”, meaning “indolence, sluggishness”, came from the Middle English word “slowe”, the same root for our contemporary word “slow”. The animal, the sloth, is named for its slow-moving behavior.

9. Gomorrah’s sister city : SODOM
The two cities of Sodom and Gomorrah, as well as Admah and Zeboim, were destroyed by God for the sins of their inhabitants, according to the Bible. The name Sodom (and Gomorrah) has become a metaphor for vice and homosexuality, and gives us our word “sodomy”.

11. Romance writer Roberts : NORA
Nora Roberts is a very successful author who has written over 165 romance novels. She writes under a number of pen names: J.D. Robb, Jill March and Sarah Hardesty.

12. Corner piece in chess : ROOK
The corner piece in the game of chess is a called a rook, a word coming from the Persian word “rokh” meaning a “chariot”. It has also been called, perhaps incorrectly, a castle, tower, marquess and rector.

21. Indian princesses : RANIS
A ranee (also spelled rani) is the female equivalent of a raja in India.

24. “The Family Circus” cartoonist Bil : KEANE
“The Family Circus” comic strip is a written by Bil Keane. Once Bil sketches out the text and idea for the cartoon he sends it off to his son, Jeff Keane, who inks and colors the cartoon so that it is ready for publication. In the storyline itself, the main characters are based on Bil’s own family. In fact, the son “Jeffy” in the story is based on Jeff, Bil’s son and production assistant.

Louis XVI ruled France from 1774 to 1792. It was Louis XVI who was married to Marie Antoinette, and who died at the guillotine during the French Revolution.

34. Earthen pot : OLLA
Olio is a term meaning a hodgepodge or a mixture, coming from the mixed stew of the same name. The stew, in turn, takes its name from the Spanish “olla”, the name of the clay pot used to make the stew.

45. Mideast confections : HALVAS
Halvas are sweet confections found in many parts of the world. Halvas are generally flour-based or based on nut-butter like sesame paste. Sounds delicious …

50. Hanukkah treat : LATKE
A latke is a delicious potato pancake (I’m Irish … anything made with a potato is delicious!).

51. Irregularly edged : EROSE
An edge that is “erose” is irregularly notched or indented.

52. Hit TV show set in Korea : M*A*S*H
“M*A*S*H” has only three stars in it (three asterisks, that is!). These asterisks first appeared on the poster for the 1970 movie, but they were omitted in the opening titles. The TV series went on to use the asterisks from the poster.

53. Jazz great Fitzgerald : ELLA
Ella Fitzgerald, the “First Lady of Song”, had a hard and tough upbringing. She was raised by her mother alone in Yonkers, New York. Her mother died while Ella was still a schoolgirl, and subsequently she became less interested in her education. She fell in with a bad crowd, even working as a lookout for a bordello and as a Mafia numbers runner. She ended up in reform school, from which she escaped, finding herself homeless and living on the streets for a while. Somehow she managed to get herself a spot singing in the Apollo Theater in Harlem. From there her career took off, and as the say, the rest is history.

59. Gridiron grp. : NFL
We never used the word “gridiron” when I was growing up (meaning a grill used for cooking food over an open fire). So, maybe I am excused for finding out fairly recently that a football field gridiron is so called because the layout of yard lines over the field looks like a gridiron used in cooking!