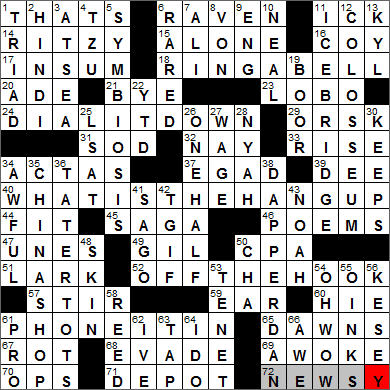 Today’s Wiki-est, Amazonian Googlies
Across
6. Poe bird that quoth “Nevermore” : RAVEN
“The Raven” is a narrative poem by Edgar Allen Poe that tells of a student who has lost the love of his life, Lenore. A raven enters the student’s bedchamber and perches on a bust of Pallas. The raven can talk, to the student’s surprise, but says nothing but the word “nevermore” (“quoth the raven, ‘Nevermore’”). As the student questions all aspects of his life, the raven taunts him with the same comment, “nevermore”. Finally the student decides that his soul is trapped beneath the raven’s shadow and shall be lifted “nevermore” …

Cesar Ritz was a Swiss hotelier, who had a reputation for developing the most luxurious of accommodations and attracting the wealthiest clientèle. He opened the Hotel Ritz in Paris in 1898, and the second of his most famous hotels, the Ritz Hotel in London, in 1906. Ritz was lucky in his career, as before starting his own hotel chain, he had been dismissed from the Savoy Hotel in London, implicated in the disappearance of a substantial amount of wine and spirits.

18. Sound familiar : RING A BELL
The expression “rings a bell” is used when something seems familiar. It is thought that the phrase might be a reference to the famous experiments by the Russian scientist Ivan Pavlov who famously trained dogs to give certain responses to stimuli such as the ringing of a bell.

29. Russian city on the Ural : ORSK
The city of Orsk is located about 60 miles southeast of the southern tip of the Ural Mountains in Russia. The city lies on the Ural River, which forms the boundary between Europe and Asia. As a result, Orsk can be considered as lying in two continents. Orsk also lies where the Or River joins the Ural, and so the Or gives the city its name.

39. Actress Sandra of “A Summer Place” : DEE
The actress Sandra Dee started out as a model before moving into film. After a promising start to her career it seemed to peter out, and the public became more interested in her 7-year marriage to Bobby Darin. And of course she will forever be remembered from the song in the movie and stage-show “Grease” called “Look at Me, I’m Sandra Dee”.

“A Summer Place” is a 1959 movie based on a novel of the same name by Sloan Wilson. The film is a romantic drama starring Richard Egan and Dorothy McGuire. “Theme from A Summer Place” became a number one hit for Percy Faith in 1960.

46. Sonnets and haikus : POEMS
A sonnet is a short poem with varying rhyming schemes but always with 14 lines. The sonnet form has been around at least since the 13th century. The Shakespearean sonnet is composed of three quatrains (4 lines) and a final couplet (2 lines).

A haiku is a very elegant form of Japanese verse. When writing a haiku in English we tend to impose the rule that the verse must contain 17 syllables. This restriction comes from the rule in Japanese that the verse must contain 17 sound units called “moras”, but moras and syllables aren’t the same thing. What the difference is though, is not so clear to me. Here’s an example of a Haiku:

50. One whose work is taxing, for short? : CPA
Certified public accountant (CPA)

Down
2. Language of Delhi : HINDI
New Delhi is the capital city of India. New Delhi resides within the National Capital Territory of Delhi (otherwise known as the metropolis of Delhi). New Delhi and Delhi, therefore, are two different things.

4. Lao-___ : TZU
Lao Tse (also Lao-Tzu) was a central figure in the development of the religion/philosophy of Taoism.

5. Relationship between barnacles and whales, e.g. : SYMBIOSIS
Barnacles and whales can have a symbiotic relationship described as commensalism. The barnacles benefits from attaching itself to the back of the whale so that plankton becomes available for feeding as the whale moves through the water. The whale doesn’t benefit from the presence of the barnacles, and nor is it harmed.

The term “symbiosis” describes a close relationship between members of two different species that benefits at least one member. There are three types of symbiotic relationship. In mutualism, the relationship is mutually beneficial. In parasitism, only member benefits, and the other is harmed. In commensalism, one species benefits without any significant impact on the other.

6. Stood on hind legs, with “up” : RARED
Horses “rear up” on their hind legs. I think that the term “rare up” is used as well, for the same meaning, but I think that it might be slang.

7. Boxer known as “The Greatest” : ALI
One of Muhammad Ali’s famous most famous lines is “I am the greatest!” So famous is the line that in 1963, Ali released an album of spoken word that had the title “I Am the Greatest!”

8. ___ Trapp family of “The Sound of Music” : VON
“The Sound of Music” is a Rodgers and Hammerstein musical made into a celebrated movie in 1965 starring Julie Andrews and Christopher Plummer. The musical is based on “The Story of the Trapp Family Singers”, a memoir by Maria von Trapp. The von Trapp family ended up in Stowe, Vermont after the war and one family descendant from the Vermont von Trapps lives here in the same town in which I reside in California.

9. The “E” of E.S.L.: Abbr. : ENG
English as a Second Language (ESL) is sometimes referred to as English for Speakers of Other Languages (ESOL) and English as a Foreign Language (EFL).

10. Best Actress Oscar winner Patricia : NEAL
Patricia Neal won her Best Actress Oscar relatively late in her career, for playing the middle-aged housekeeper in 1963’s “Hud”. A few years’ later she was offered the role of Mrs. Robinson in “The Graduate” but turned it down. Famously, Neal had an affair with Gary Cooper who was married at the time. She became pregnant with his child, but he persuaded her to have an abortion. Not long afterwards Neal married British writer Roald Dahl (of “Willy Wonka” fame) and the couple had five children together before divorcing in 1983.

11. Frozen structure that facilitates animal migration : ICE BRIDGE
An ice bridge is temporary frozen structure that spans bodies of water. Ice bridges can facilitate that migration of animals, migration that would not be possible through the body of water itself. The most significant ice bridges are those caused by glaciation as they can be extremely large and span very deep bodies of water.

13. Former Senate minority whip Jon : KYL
Jon Kyl is a former US Senator from Arizona, serving from 1995 until his retirement in 2013. Kyl was also the Senate Minority Whip. He is the son of John Henry Kyl who served as the US Representative for the State of Iowa for many years. Kyl now works as a lobbyist.

25. Aspiring atty.’s exam : LSAT
The Law School Admission Test (LSAT) has been around since 1948.

36. Cylindrical alternative to French fries : TATER TOTS
Ore-Ida founders came up with the idea for Tater Tots when they were deciding what to do with residual cuts of potato. They chopped up the leftovers, added flour and seasoning, and extruded the mix through a large hole making a sausage that they cut into small cylinders. We eat 70 million pounds of this extruded potato every year!

38. Sharply dressed guy : DAPPER DAN
A man described as a “Dapper Dan” is one who is dressed very nattily. There have been a few people who have used the Dapper Dan moniker over the years, including a gangster in the twenties called Dapper Dan Hogan and a baseball player who was active around the same time called Dapper Dan Howley.

41. Kind of palm : SAGO
When I was growing up in Ireland I was very familiar with pearl sago, which is very similar to pearl tapioca. Pearls of sago are simply little balls of sago starch used to make breads, pancakes, biscuits, or the steamed puddings that we ate as kids. Sago comes from pith of the sago palm tree. To get at the starch the tree has to be cut down and the trunk split to reveal the pith. The pith is crushed and manipulated to make the starch available, which is then washed out of a fibrous suspension. One sago palm tree yields about 150-300 kg of starch. Personally I love the stuff, but then, I am a bit weird …

42. End-of-week cry : TGIF!
“Thank God It’s Friday” (TGIF) is a relatively new expression that originated in Akron, Ohio. It was a catchphrase used first by disk jockey Jerry Healy of WAKR in the early seventies.

43. 2014 biblical title role for Russell Crowe : NOAH
The 2014 epic film “Noah” stars Russell Crowe in the title role, and is based on the biblical story of “Noah’s Ark”. The film was largely shot in Southern Iceland. Scenes that included the ark itself were shot in Upper Brookville, New York at the Planting Fields Arboretum.

53. Basic belief : TENET
A tenet is an article of faith, something that is held to be true. “Tenet” is Latin for “he holds”.