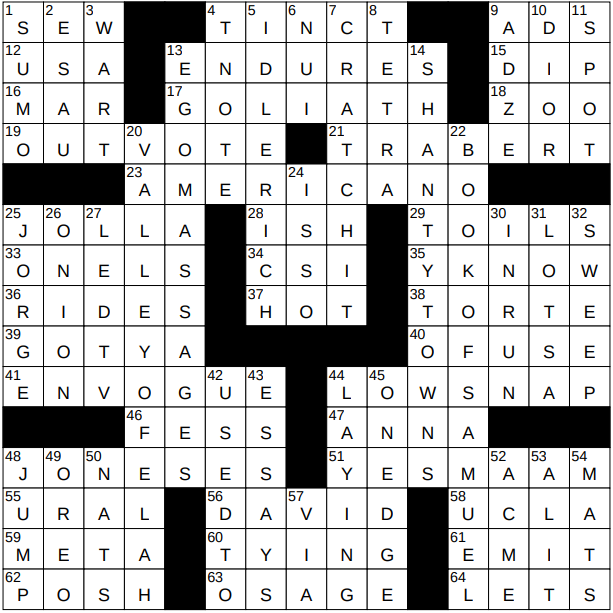 Today’s Theme (according to Bill): Sling It in the Middle

We have some grid art today, a slingshot in the middle of the grid. Themed answers refer to the story of DAVID battling with GOLIATH:

17A One known for living large and getting stoned? : GOLIATH
56A Classic underdog : DAVID
20D Biblical site for the battle depicted in this puzzle : VALLEY OF ELAH

In the story of David and Goliath, the Israelites and the Philistines faced each other in battle at the Valley of Elah. Goliath was the warrior champion of the Philistines and each day he challenged the Israelites to send out their champion to decide the battle in a one-on-one fight. No one was courageous enough to accept the challenge until young David agreed to face the mighty Goliath. David felled the giant soldier with a stone from his sling.

A caffè Americano is espresso to which hot water is added, bringing the coffee to a similar strength as drip coffee. Caffè Italiano is a similar drink, but a little stronger, with a 1:1 ratio of espresso to hot water.

The name of the city of La Jolla is often said to be a corruption of the Spanish “La Joya” meaning “The Jewel”, giving rise to the city’s nickname “Jewel City”. Scholars dispute this etymology, but it makes for good marketing.

39 April Fools’ exclamation : GOT YA!

48 Neighbors to keep up with : JONESES

The Big Ten is the nation’s oldest Division I college athletic conference. It was founded in 1896, and earned the name “Big Nine” in 1899 when Iowa and Indiana joined to bring the number of teams in the conference to nine. The conference name was changed to the Big Ten after Michigan rejoined in 1917. Right after WWII, the University of Chicago dropped out so the conference became known as the Big Nine again until 1949. The official designation of “Big Ten” was adopted in 1987 when the conference (once again with a complement of ten teams) registered as a not-for-profit corporation. It was decided to keep the official name of Big Ten when Penn State joined in 1990 bringing the number of schools to the level of eleven. The number of schools in the conference continues to evolve, but that “Big Ten” moniker persists.

Facebook, Inc. changed its name to Meta Platforms, Inc. in 2021 as part of a rebranding exercise.

No one really knows the etymology of the word “posh”. The popular myth that “posh” is actually an acronym standing for “port out, starboard home” is completely untrue, and is a story that can actually be traced back to the 1968 movie “Chitty Chitty Bang Bang”. The myth is that wealthy British passengers traveling to and from India would book cabins on the port side for the outward journey and the starboard side for the home journey. This trick was supposedly designed to keep their cabins out of the direct sunlight.

A wart is a small eruption on the skin caused by a localized viral infection. Apparently, the most successful treatment is topical use of salicylic acid, with a cure rate of 75%. I think it’s best to try to avoid getting them …

Bob Cratchit is the underpaid clerk who works for Ebeneezer Scrooge in the Charles Dickens story “A Christmas Carol”.

9 Tool that’s a homophone of 9-Across : ADZE
[9A Premium subscriptions often remove them : ADS]

Fashion designer Christian Dior showed off his first collection in 1947, to great acclaim. The editor-in-chief of “Harper’s Bazaar” remarked, “it’s such a new look!” as there was a clear contrast with the austere designs that dominated the war years. The remark resulted in the collection being labeled forever as the “New Look”.

Our word “shanty” is used for a rough cabin. It comes from the Canadian French word “chantier”, which is a “lumberjack’s headquarters”.

Jorge Luis Borges was an Argentine writer and poet from Buenos Aires. By the time Borges was in his early thirties, he was published many times. However, he had not achieved sufficient success to support himself as a writer, and so started a career as a public lecturer. Around this time, Borges garnered more attention through his speaking, but also started to lose his sight. He was to become completely blind in his late fifties. It has been suggested that this progressive blindness gave him a particularly unique writing style, one that was to bring him a lot of celebrity and respect. One of Borges’ more famous quotations is, “I have always imagined that paradise will be a kind of library”.

A light-emitting diode (LED) is a specialized form of semiconductor that when switched on releases photons (light). LEDs were used in early digital watches, and are getting more and more popular even though their use in electronic equipment is fading away. LEDs are used as replacements for the much less-efficient tungsten light bulbs. I replaced all of my tungsten Xmas lights a few years ago and saved a lot on my electricity bill.

Joan Didion is a journalist and author who was profiled in the Netflix documentary “The Center Will Not Hold”. She won a Pulitzer for her autobiographical work “The Year of Magical Thinking”, which book she used as the basis for a stage play of the same name. The book focuses on the year following the death of her husband, while the play also encompasses the subsequent death of her daughter.

If you attend a Washington Nationals baseball game, held in Nationals Park, you’ll see the Presidents Race in the middle of the fourth innings. Individuals dressed like six former US presidents, each sporting a large and cartoonish head, participate in the race. The runners in the footrace are: