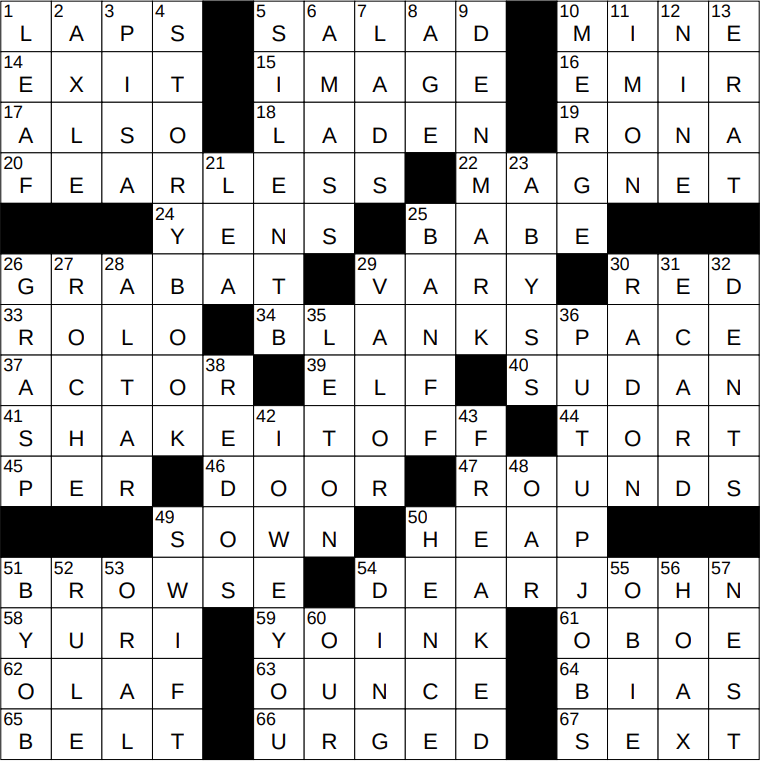 Constructed by: Malgorzata Nowakowska & Eileen Williams
Edited by: Will Shortz

5 Word with dressing or days : SALAD …

One’s salad days are the days of one’s youth, days of carefree exuberance and idealism. The expression “salad days” originated in William Shakespeare’s “Antony and Cleopatra” as Cleopatra refers to her youthful indiscretions saying:

10 *Workplace for the Seven Dwarfs : MINE

Rolo was a hugely popular chocolate candy in Ireland when I was growing up. It was introduced in the thirties in the UK, and is produced under license in the US by Hershey. I was a little disappointed when I had my first taste of the American version as the center is very hard and chewy. The recipe used on the other side of the Atlantic calls for a soft gooey center.

40 Formerly the largest country in Africa, but since 2011 the third-largest : SUDAN

Russian cosmonaut Yuri Gagarin became the first man in space when his spacecraft Vostok I made a single orbit of the Earth in 1961. Sadly, Gagarin died only seven years later in a plane crash.

63 Unit in a birth announcement : OUNCE

1 Symbol over the “i” in the Tropicana logo : LEAF

The Tropicana company is most famous for its orange juice. The company is headquartered in Chicago, where not many oranges are grown …

2 Part of a drivetrain : AXLE

The drivetrain of a car is made up of the components that deliver power to the driving wheels. It excludes the engine, which produces that power. The combination of the engine and the drivetrain is known as the powertrain.

3 City with a famous tower : PISA

5 Element of doubt? : SILENT B

12 What all Alaska ZIP codes start with : NINE …

49 Taylor ___, some of whose hit songs are featured in the answers to the starred clues : SWIFT

52 Something a renegade may break or ignore : RULE

A renegade is a person who leaves one cause, usually to take up an opposing cause. “Renegade” likely comes from the Spanish “renegado”, a term which originally was used for a Christian who had converted to Islam back in the late 16th century.

“Our Song” is a number recorded by Taylor Swift in 2006. Swift wrote the song during her freshman year for a high school talent show.