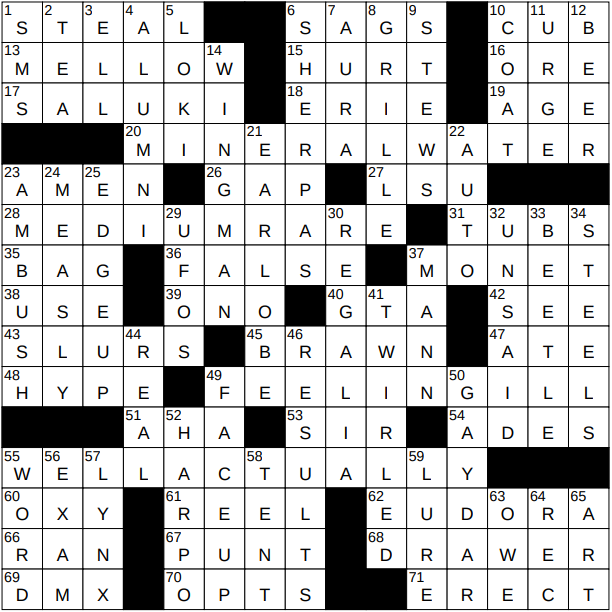 Constructed by: Karen Lurie
Edited by: Will Shortz

Themed answers are common phrases reinterpreted as questions to which one might answer “WELL, ACTUALLY”:

The Saluki is also known as the Persian greyhound or the royal dog of Egypt. The Saluki breed has been around a long time. Salukis feature in petroglyphs in Iran that date back to over 10,000 years ago.

37 “Morning on the Seine” painter : MONET

“Grand Theft Auto” (GTA) is an extremely successful series of video games. The game garners some negative attention because of its adult themes and the level of violence in the storyline. The original version of “Grand Theft Auto” was actually banned in Brazil.

OXY 10 is a brand name for a medication with the active ingredient benzoyl peroxide. Benzoyl peroxide is used as an acne treatment, as well as for dyeing hair, for whitening teeth and in the preparation of flour.

62 Welty with a Pulitzer : EUDORA

Eudora Welty was an author from Jackson, Mississippi who wrote short stories and novels about the American South. Welty won a Pulitzer in 1973 for her novel “The Optimist’s Daughter”. She was also awarded the Presidential Medal of Freedom, in 1980. The Eudora email system, once used by Mac and Windows operating systems, was named for Eudora Welty.

One might toss one’s hat in the ring, take up the challenge, show willingness to vie for a position perhaps.

69 First musician to have his first five albums debut at #1 : DMX

The first letter in the word “line” is a letter L (ell).

“Top Gun” is an entertaining action movie released in 1986 starring Tom Cruise and Kelly McGillis. The movie is all about pilots training at the US Navy’s Fighter Weapons School. A lot of footage was shot on board the Navy’s carrier the USS Enterprise during flight operations. At one point in a day’s shooting, the commander of the Enterprise changed course as needed for normal operations, but this altered the light for the cameras that were filming at the time. Director Tony Scott asked for the course to be changed back, but was informed that a course change would cost the Navy $25,000. Scott wrote out a check there and then, and he got another five minutes of filming with the light he needed.

The insect we know as a ladybug (also “ladybird”) has seven spots on its wing covers. These seven spots gave rise to the common name “ladybug”, as in the Middle Ages the insect was called the “beetle of Our Lady”. The spots were said to symbolize the Seven Joys and Seven Sorrows, events in the life of the Blessed Virgin Mary called out in the Roman Catholic tradition.

Although we often use the term “bug” very broadly, describing almost any insect or even microorganisms, “true” bugs belong to the hemiptera order of insects. To further complicate things, species belonging to the suborder heteroptera are also often referred to as “true bugs”. To complicate things even further, the familiar lovebug and ladybug aren’t bugs at all. The lovebug is a fly, and the ladybug is a beetle.

49 How blackjack cards are dealt : FACE UP

Gaydar is a portmanteau of “gay” and “radar”, and describes the supposed ability to assess someone’s sexual orientation.

58 Something to pitch : TENT

Our word “tent”, describing a fabric shelter”, comes from the Latin “tentus” meaning “stretched”. The idea is that a tent is a portable shelter made from something “stretched” out over a framework.