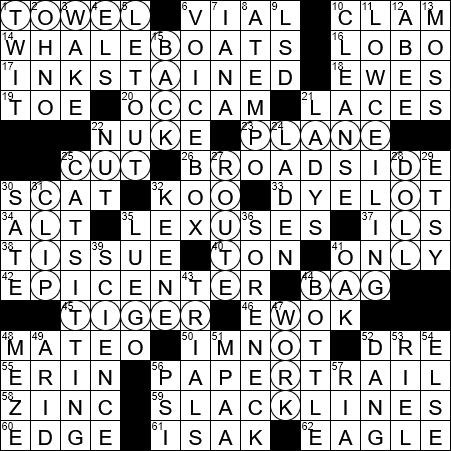 Constructed by: Margit Christenson
Edited by: Will Shortz

Themed answers each require PAPER at the front in order to make sense. And, those answers TRAIL through the grid, are connected:

14 The Pequod and others : WHALEBOATS

20 Philosopher who posited that the simplest explanation is the most likely one : OCCAM

“Kitchy-kitchy-koo” is a taunt uttered while tickling someone.

“Ils” is the French for “they”, if not referring to feminine nouns (when “they” translates as “elles”).

“Only Sixteen” was a hit for Sam Cooke in 1959. Dr. Hook released a cover version in 1976 that was even more successful than Cooke’s. The Dr. Hook version was actually banned by the BBC.

42 Focal point of an earthquake : EPICENTER

A paper tiger is something that appears to be threatening like a tiger, but when challenged tends to back down. The term “paper tiger” is a direct translation of the Chinese phrase that has the same meaning.

Erin Brockovich is an environmental activist who is famous for the role she played in building a case against Pacific Gas & Electric for contaminating drinking water. Her story was told in a 2000 film title “Erin Brockovich” starring Julia Roberts in the title role. Brockovich herself actually appeared in the film, as she was given a cameo as a waitress in a restaurant scene.

The metal zinc is an essential trace element in the human diet. There are 2-4 grams of zinc in the body typically, with the highest concentrations in the eyes and the male prostate gland.

61 “Out of Africa” writer Dinesen : ISAK

62 Bird on the Mexican flag : EAGLE

The Mexican flag consists of three vertical stripes of green, white and red. The national coat of arms is displayed in the center of the white stripe.

8 At the previous speed, in scores : A TEMPO

9 It’s dropped before a trip : LSD

32 Writer Carolyn, the pen name of more than 10 authors of the Nancy Drew series : KEENE

39 Something that’s “true whether or not you believe in it,” per Neil deGrasse Tyson : SCIENCE

Meze is a platter of small dishes served as appetizers in several Mediterranean locales.

The rial is the currency of Cambodia (as well as Yemen, Iran, Oman and Tunisia). Generally, there are 1,000 baisa in a rial.