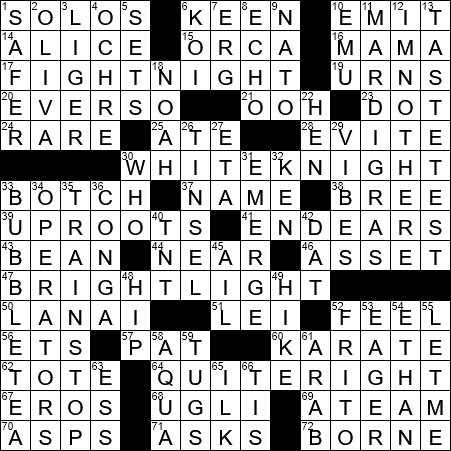 Themed answers each comprise two words that rhyme with “write”, for example:

15 Apex predator of the ocean : ORCA

An apex predator is at the top of a food chain, and has no other natural predators. Examples are the orca (“killer whale”) in the oceans, the lion in Africa, and the Tyrannosaurus in the days of the dinosaurs.

16 Bear whose bed is too soft, in a children’s story : MAMA

38 One of the housewives on “Desperate Housewives” : BREE

56 Venusians and Martians, in brief : ETS

2 Tony who played for 15 seasons with the Minnesota Twins : OLIVA

Tony Oliva is a former Major League Baseball player who played his whole career for the Minnesota Twins. Oliva suffered from severe knee problems due to multiple injuries, forcing him to play the last four years of his career as a designated hitter (DH). On the bright side, he went into the history books in 1973 when he became the first DH to hit a MLB home run.

6 Kind of pond in a Japanese garden : KOI

13 Pepsi Challenge, for one : TASTE TEST

The Pepsi Challenge is a marketing campaign that PepsiCo introduced in 1975 as a tactic in the Cola Wars with the Coca-Cola Company. The challenge itself involves a blind taste test.

18 Witness to the first rainbow in the Bible : NOAH

Back in the mid-1400s, the word “tinsel” applied to cloth into which was woven gold or silver thread. The term came from the Middle French word “estincelle” meaning “spark, spangle”, which ultimately derived from the Latin “scintilla” meaning “spark”. By the end of the 1500s, “tinsel” described thin strips of shiny metal. The word “Tinseltown” wasn’t applied to Hollywood until 1972.

27 Info on an airport monitor, for short : ETA

30 Repeated question from an owl? : WHO

It was Tom Cruise’s idea to adapt the “Mission: Impossible” television series for the big screen, and it became the first project for Cruise’s own production company. Tom Cruise took on the starring role of Ethan Hunt, the point man for the Impossible Missions Force (IMF).

61 Horse developed in the desert : ARAB