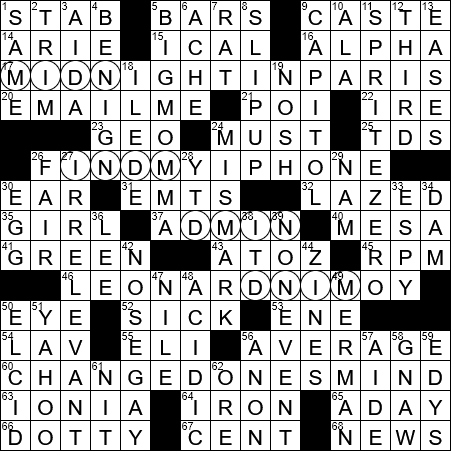 Themed answers each include the letter grouping M-I-N-D, circled in the grid. The order of the letters in that M-I-N-D has been changed in each case:

5 Word after monkey or handle : … BARS

The Junglegym was invented in Chicago in 1920, although today we use the generic term “jungle gym”. I hear that monkey bars are a specific type of jungle gym, one consisting primarily of vertical steps and a horizontal ladder from which the “little monkey” can swing from rung to rung.

Rachel McAdams is an actress from London, Ontario who now lives in Toronto, where she also studied theater at university. I’ve enjoyed many of McAdams’ film performances, especially in the excellent 2015 biographical drama “Spotlight”.

“Dumbo” is a 2019 live-action movie inspired by the original 1941 Walt Disney animated film of the same name. Directed by Tim Burton, 2019’s “Dumbo” focuses less on the title character, and more on the humans who interact with the animals. Indeed, the animals in Burton’s “Dumbo” don’t talk, even though they do in the Disney version.

Ipanema is a beach community in the south of Rio de Janeiro in Brazil. The name Ipanema is a local word meaning “bad water”, signifying that the shore is bad for fishing. The beach became famous worldwide following the release of the song “The Girl from Ipanema” in 1962.

A severe tropical storm is called a hurricane when it occurs in the Atlantic and Northeast Pacific, a typhoon in the Northwest Pacific, and a cyclone in the South Pacific and Indian Ocean. Tropical storms form over warm water, picking up energy from the evaporation from the ocean surface.

63 Ancient land that lent its name to an order of architecture : IONIA

The geographic region called Ionia is located in present day Turkey. Ionia was prominent in the days of ancient Greece, although it wasn’t a unified state and rather a collection of tribes. The tribal confederacy was more based on religious and cultural similarities than a political or military alliance. Nowadays we often refer to this arrangement as the Ionian League.

Apparently the old adage “an apple a day keeps the doctor away” originated in Pembrokeshire in Wales. There was a local proverb in the area quoted in print in the mid-1800s:

Eat an apple on going to bed,
And you’ll keep the doctor from earning his bread.

A goof is a mistake. The verb “to goof off” was coined in 1941 meaning “to make a mistake at drill”. After the war, the meaning extended to describe wasting time, loafing around.

9 Building pictured on the back of a $50 bill : CAPITOL

A capitol is a building in which a legislature meets. Such buildings are often constructed with an impressive dome. The term “capitol” is a reference to the Temple of Jupiter Optimus Maximus, the most important temple in ancient Rome, and which sat on top of Capitoline Hill.

12 Place for a bronze medalist : THIRD

When the magnificent Hoover Dam was completed in 1936 it was the largest hydroelectric plant in the world, as well as being the world’s largest concrete structure. The edifice was originally known as Boulder Dam, due to its location near Boulder City, Nevada. The dam was eventually named after Herbert Hoover for his role in having the dam built when he was Secretary of Commerce, and his later support as US President. There was a formal dedication ceremony held in September 1935 when President Franklin D. Roosevelt was in the area, when only work on the powerhouse was incomplete. President Roosevelt managed to make his dedication speech without once referring to the name of his former opponent President Hoover. When the dam was finally put into service in 1936, the project was two years ahead of schedule. Those were the days …

A nosegay is a posy, a bouquet of flowers. As one might expect, a nosegay is designed to make the nose gay and joyous with the aroma of fresh cut flowers.

Ethel Merman was an actress and singer, one noted for having a very powerful voice. Merman was married and divorced four times, the last time to the actor Ernest Borgnine, albeit for only 32 days in 1964.

“El Cid” is an epic film released in 1961 that tells the story of the Castilian knight who was known as El Cid. The two big names at the top of the cast were Charlton Heston and Sophia Loren, but just who was the biggest star? When Loren discovered that a huge billboard promoting the movie in Times Square showed that her name was below Heston’s, she sued the movie’s producers.

62 About which someone might say “Get the lead out!” : ORE