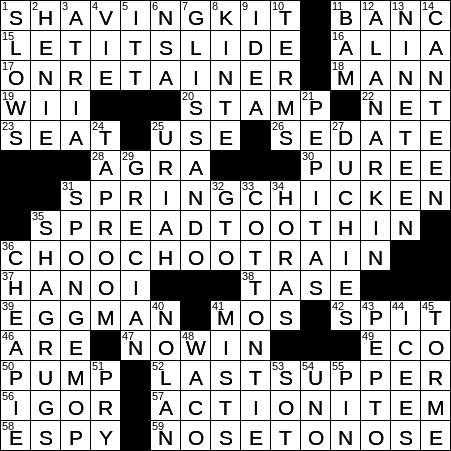 Alia Shawkat is an actress who might be best known for playing Maeby Fünke on the sitcom “Arrested Development”. Shawkat is best friends with fellow actress Ellen Page, whom she met while filming the 2009 movie “Whip It”.

Horace Mann was Massachusetts politician, and the first Secretary of the Massachusetts State Board of Education. Mann made sweeping educational reforms in the state, with other states around the country adopting many of the policies he developed. Such was his influence that he is known by historians as the “Father of the Common School Movement”. And as an aside, Mann was brother-in-law to author Nathaniel Hawthorne.

23 Something sought for the House biennially : SEAT

The six-year terms enjoyed by US senators are staggered, so that every two years about one third of the US Senate seats come up for reelection. Members of the House of Representatives serve two-year terms, with elections taking place every even year.

Victor Appleton wrote a novel for young adults called “Tom Swift and His Electric Rifle”. The company that developed the TASER electroshock weapon partly named its product as a homage to the novel. The acronym “TASER” stands for “Thomas A. Swift’s Electric Rifle”.’

Sonja Henie was a World and Olympic Champion figure skater from Oslo, Norway who competed in the days when “amateur” sports stars were not paid. Henie made up for her lack of income from competing by developing a career in Hollywood. She was one of the highest-paid film stars at the height of her movie career.

7 Notable feature of the opening clarinet solo in “Rhapsody in Blue” : GLISSANDO

“Rhapsody in Blue” is one of the most popular works by the great George Gershwin. The piece has a famous clarinet glissando at its opening, but is a work for solo piano and orchestra. Gershwin himself played the piano at its premiere in 1924. We can’t be certain how that original “Rhapsody” sounded as Gershwin improvised some of what he was playing, and didn’t write out the piano part until after the first performance.

13 Number that can be spelled with only one-point Scrabble tiles : NINETEEN

Uriah the Hittite was a soldier mentioned in the Bible, a soldier in the army of King David. Uriah was married to Bathsheba with whom King David had an affair. David had Uriah killed and then took Bathsheba as his wife. Bathsheba and David became the parents of Solomon who succeeded David as king.

27 Lancaster and Cornwall, for two : DUCHIES

Camilla Parker Bowles became the Duchess of Cornwall when she married Charles, Prince of Wales in 2005. The Duchess of Cornwall title derives from Duke of Cornwall, one of Charles secondary designations. The use of the primary title Princess of Wales wasn’t considered a good idea as it was closely associated with Lady Diana Spencer, Charles’ first wife.

Pepto-Bismol was originally marketed as a remedy for infant diarrhea, and sold under the name “Bismosol: Mixture Cholera Infantum”.

45 Co-writer of “The Christmas Song” : TORME

Mel Tormé was a jazz singer, with a quality of voice that earned him the nickname “The Velvet Fog”. Tormé also wrote a few books, and did a lot of acting. He was the co-author of the Christmas classic known as “The Christmas Song”, which starts out with the line “Chestnuts roasting on an open fire …”

The Christmas classic known as “The Christmas Song”, which starts out with the line “Chestnuts roasting on an open fire”, was written in 1944 by Bob Wells and singer Mel Tormé. According to Tormé, the song was actually written on a very hot summer day, with Wells providing the lyrics. Apparently without the intention of writing a song, Wells jotted down four “Christmassy” phrases in an effort to “stay cool by thinking cool”. Those phrases were:

“The Christmas Song” is now the most-performed Christmas song in the world.

In ten pin bowling, a split takes place when the number-one pin (headpin) is knocked down with the first ball and two or more non-adjacent pins are left standing. The most difficult split to deal with is the infamous 7-10 split, where just the rear pins at the extreme right and left remain standing.