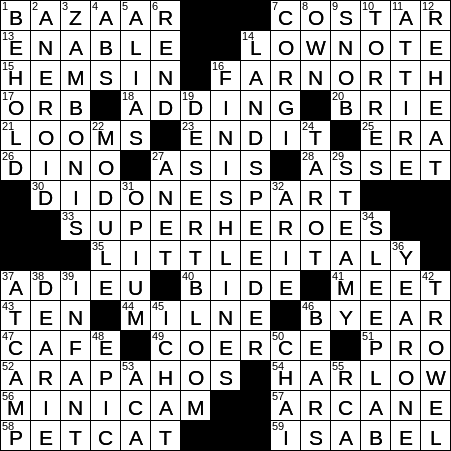 16 Where to see the aurora borealis : FAR NORTH

20 Its exterior is the edible mold Penicillium candidum : BRIE

47 Setting for many Manet paintings of the bourgeoisie : CAFE

Édouard Manet was a French painter whose works are mainly classified as Realist. Manet was friends with Impressionists masters like Edgar Degas, Claude Monet and Pierre-Auguste Renoir and greatly influenced the Impressionist movement. The list of Manet’s marvelous paintings includes “Le Déjeuner sur l’Herbe”, “Le Repose” and “A Bar at the Folies-Bergère”.

54 Jean on the Hollywood Walk of Fame : HARLOW

Jean Harlow was a Hollywood actress who was at the height of her success in the nineteen-thirties, appearing in many hit movies for MGM. Sadly, Harlow died in 1937, when she was only 26 years old, from kidney failure that was probably the result of her suffering scarlet fever when she was 15. Harlow wrote a novel that took many years to get published. Called “Today is Tonight”, it first appeared on bookshelves in 1965.

Something described as “esoteric” is meant only for a select few with special knowledge. The term comes from the Greek “esoterikos” meaning “belonging to an inner circle”.

58 Socks, once, for Bill and Hillary Clinton : PET CAT

Socks was the pet cat belonging to the Clinton family while they lived in the White House. When President Clinton left office, Socks was adopted by Bettie Currie, the President’s secretary. Apparently Socks wasn’t getting on well with Buddy, the Clintons’ pet dog.

2 Kind of barometer that doesn’t use liquid : ANEROID

A barometer is an instrument used to measure atmospheric pressure. There are several types of barometer, each using a different technology to measure pressure. Some use water or mercury in a tube. An aneroid barometer uses the amount of “bulge” in a thin metal disk covering a partially-evacuated chamber. This compact technology is often used in barometers that resemble clocks.

Actress Gina Torres plays the formidable Jessica Pearson on the USA Network show “Suits”. In real life, Gina is married to the actor Laurence Fishburne. Torres and Fishburne appeared together on the horror TV show “Hannibal”, in which they played a married couple.

The Yves Saint Laurent (YSL) perfume named “Opium” was introduced in 1977. Opium caused quite a stir when it first hit the stores, as many interpreted the use of the term “opium” as an endorsement of drug usage.

37 Where capture the flag is often played : AT CAMP

The kid’s game “Capture the Flag” has gone hi-tech. There are computer versions of the game now, as well as an intriguing “urban game” version. In the urban game, players head out into the city streets and play in teams while communicating by cell phone.

iChat was introduced in 2002, and was Apple’s “instant messaging” application that integrated with the Mac Operating System. iChat was replaced by the Messages app.

46 Franchise with the most victories in N.F.L. history : BEARS

The Random House publishing house was founded in 1925 by Donald Klopfer and the marvelous Bennett Cerf of TV’s “What’s My Line”. Apparently, Klopfer and Cerf originally resolved to “publish a few books on the side at random”, and hence came up with the name “Random House”.