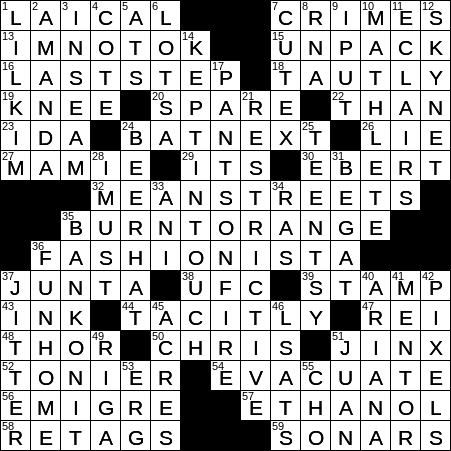 In bowling, the downing of all ten pins in two balls in the same frame is called a spare, and scores ten points. The player gets a bonus, equal to the number of pins downed with the next ball, which could be up to ten. Hence, a spare can be worth up to 20 points

“Princess Ida; or, Castle Adamant” is a Gilbert & Sullivan comic opera. It was first performed in 1884 at the Savoy Theatre in London that was famous for staging the duo’s works.

Mamie Eisenhower was surely one of the most charming of all the First Ladies of the United States. Ms. Eisenhower suffered from an inner ear complaint called Ménière’s disease which caused her to lose her balance quite often. Because she was unsteady on her feet there were unfounded rumors floating around Washington that Ms. Eisenhower had a drinking problem. People can be very unkind …

“The Great Movies” is a series of four books published by film critic Roger Ebert. In those publications, Ebert lists 364 movies that he deemed “landmarks of the first century of cinema”.

35 An official color of the University of Texas : BURNT ORANGE

A junta is a group of military officers that rule a country, usually after having seized power forcibly. “Junta” is a Spanish word meaning “council”.

Someone or something described as chichi is showily trendy and pretentious. “Chichi” is a French noun meaning “airs, fuss”.

Enrico Fermi was born in Rome, Italy. Fermi moved to the US just before WWII, largely to escape the anti-Semitic feelings that were developing in Italy under Mussolini. Fermi traveled from Rome to Stockholm in 1938 to receive that year’s Nobel Prize in Physics. Instead of returning to Italy, Fermi and his family traveled on to New York City, where they applied for permanent residency. It was Fermi’s work at the University of Chicago that led to the construction of the world’s first nuclear reactor. Fermi died at 53 years of age from stomach cancer . Cancer was a prevalent cause of death among the team working on that first nuclear pile.

59 They make waves in the ocean : SONARS

“The Glass Menagerie” is a play by Tennessee Williams that was first staged in 1944. This was the play that brought Williams to the public’s attention, due to its very positive reception.

PolitiFact is a project in which reporters and editors primarily from the “Tampa Bay Times” fact-check statements made by politicians and related parties. Statements can be graded from “True” at one extreme, to “Pants on Fire” at the other.

21 Opposite of laissez-faire : RESTRICTIVE

“Laissez-faire” is a French term that we use to describe non-interference in the affairs of others. The literal translation is “to let to allow”.

33 Bad “Wheel of Fortune” buy for NATURAL RESOURCE : AN I

The major bodies of water between the south-western tip of British Columbia and the north-western tip of Washington state are the Strait of Georgia, the Strait of Juan de Fuca, and Puget Sound. Since 1988, the whole network of coastal waterways in this area have been referred to as the Salish Sea. The term was coined by marine biologist Bert Webber who wanted to raise awareness of the need to manage the region’s waters and ecosystems collectively.