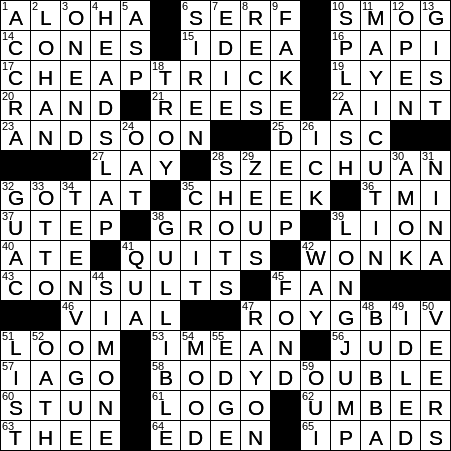 Themed answers each comprise two words, both of which are types of SHOT:

Cheap Trick is a rock band from Illinois that was formed in 1973. Such is the band’s popularity that the Illinois Senate in 2007 declared that April 1 every year would be Cheap Trick Day.

The single star on the state flag of Texas is a reminder of the “lone star” on the 1836 National Standard of Texas. The single gold star on a blue background symbolized Texas as an independent republic and its struggle for independence from Mexico.

Saint Jude was one of the twelve apostles, and one who went by the name Thaddeus. In the Roman Catholic tradition, Jude is the patron saint of lost causes and desperate cases.

61 A panda, for the World Wildlife Fund : LOGO

Umber is an earthy, brown shade. The word “umber” originally described a pigment made from earth found in Umbria, the region in central Italy. In its natural form, the pigment is referred to as “raw umber”. The heated form of the pigment has a more intense color and is known as “burnt umber”.

“Retina Display” is a brand name used by Apple for screens that have a high enough pixel density so that individual pixels are not visible to the naked eye at normal viewing distance.

Bubba Watson is a golfer on the PGA Tour from Bagdad, Florida. Watson is known as a big driver of the ball. He can hit a golf ball over 350 yards. Born Gerry Watson, he was nicknamed by his father in honor of football player Bubba Smith.