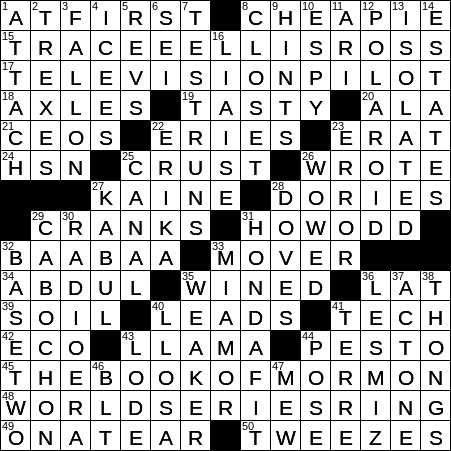 Constructed by: Doug Peterson & Erik Agard
Edited by: Will Shortz

15. Player of the mother on “Black-ish” : TRACEE ELLIS ROSS

A dish prepared “a la king” (usually chicken or turkey), is food prepared in a cream sauce, with mushrooms, pimentos, green peppers and sherry.

Tim Kaine took office as US Senator for Virginia in 2013, having served as the state’s governor from 2006 to 2010. He was also chairman of the Democratic National Committee from 2009 until 2011. Famously, Senator Kaine ran as vice presidential running mate in Hillary Clinton’s unsuccessful bid for the presidency in 2016.

A Jack-in-the-box is child’s toy. It’s a box with a crank handle at the side. Turning the crank causes a tune to play (usually “Pop Goes the Weasel”), and at the right moment the lid pops open and a spring loaded clown character jumps up out of the box.

Paula Abdul is primarily a singer and dancer, and someone who endeared herself even more to the American public in recent years as a judge on “American Idol”. Abdul had a famous husband for a couple of years, as she was married to actor Emilio Estevez from 1992-94.

The Georgia Institute of Technology (commonly “Georgia Tech”) is located in Atlanta. The school was founded in 1885 as part of the reconstruction effort to rebuild the infrastructure in the South after the Civil War. President Theodore Roosevelt delivered an address to the school in 1905, and then shook hands with every single student. Back then the school didn’t have over 20,000 students as it does today …

“The Book of Mormon” is a satirical musical by Trey Parker and Matt Stone (of “South Park” fame) and Robert Lopez (of “Avenue Q” and “Frozen” fame). The show follows two missionaries from the Mormon Church seeking converts in a remote village in Uganda.

50. Removes roots and all : TWEEZES

2. Apex predators of the past : T REXES

Jimmy Fallon was a cast member for a number of years on “Saturday Night Live” before getting his own talk show in 2009, “Late Night with Jimmy Fallon”. Fallon took over “The Tonight Show” from Jay Leno in 2014. I’m not a big Fallon fan …

4. Some causes of brain freeze : ICEES

Instant film is a film that contains the chemicals necessary to develop and fix the photo without subsequent processing. Instant film was first introduced in 1972 by Polaroid.

Amsterdam is the cultural capital and the commercial capital of the Netherlands, but not the administrative capital. That honor goes to the Hague. Amsterdam’s name translates as “Dam on the river Amstel”.

Kabul is the capital and largest city of Afghanistan. The city has been the site of major conflict for much of the 3,500 years that it has been in existence. In the past, this conflict was mainly driven by the city’s strategic location on the major trade routes of south and central Asia.

Baku is the capital city of Azerbaijan and sits on the Caspian Sea. It’s thought that the name “Baku” comes from the Persian “Bad-kube” meaning “wind-pounded city”.

The Honda Fit (“Honda Jazz” in some markets) is a subcompact hatchback. We looked at the Fit when shopping for a new car not that long ago, but opted for the larger Toyota Prius instead, a choice that we have not regretted …

That would be French.

“Pokémon” is the second-biggest video game franchise in the world, second only to the “Mario” franchise. “Pokémon” is a contraction of “Pocket Monsters”.