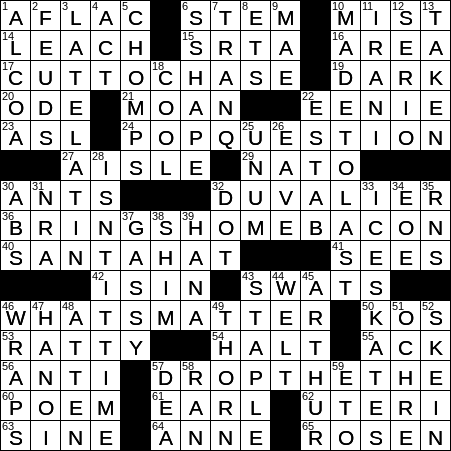 Today’s Reveal Answer: Drop the “The”

Themed answer are common phrases with “the” dropped:

The stem of a watch is the shaft that projects from the body and which is used to wind the mechanism. Prior to the introduction of stem watches, the timepieces were wound up using a key.

The wonderful, wonderful actor Cary Grant was born in Bristol in England, and was given the name Archibald Leach. In the 1949 Howard Hawks film “His Girl Friday”, there’s a line where Grant describes the fate suffered by someone who crossed him. He names that person “Archie Leach”, an ad-lib using his real name.

22. Start of an elimination : EENIE

29. Its alphabet goes from Alfa to Zulu : NATO

A pheromone is a chemical secreted by an animal that triggers a social response of some sort in members of the same species. Sex pheromones are usually released by females, indicating availability for breeding. Trail pheromones are laid down to guide others from a nest to food. Territorial pheromones are used to mark the boundaries of an animal’s territory.

The dictatorial President of Haiti known as “Papa Doc” was in fact a medical doctor. Francois Duvalier graduated with a medical degree from the University of Haiti in 1934, and even spent a year studying public health at the University of Michigan. It was his grateful patients who used to call him Papa Doc. When he came to power as President, he was less caring, and ruled with an iron fist until he died in office in 1971.

Jean-Claude Duvalier was President of Haiti from 1971 to 1986. Jean-Claude had the nickname “Baby Doc”, a moniker that inherited from his father François “Papa Doc” Duvalier. Baby doc was a brutal a ruler as his father, which led to his overthrow in 1986 in a popular uprising.

36. Chauffeurs the actor Kevin to his house? : BRINGS HOME BACON (from “brings home the bacon”)

Kevin Bacon is an actor from Philadelphia who appeared first on the big screen in the 1978 comedy “National Lampoon’s Animal House”. That wasn’t to be the big break that Bacon needed though, which came with “Footloose” in 1984. A fun fact about him is that he is the subject of a popular trivia game called “Six Degrees of Kevin Bacon” in which players have to show that a particular actor can be related to Kevin Bacon in fewer than six links, with each link being a movie in which two actors appear together.

In the incredibly successful period drama “Downton Abbey”, the patriarch of the family living at Downton is Robert Crawley, the Earl of Grantham or Lord Grantham. The character is played by Hugh Bonneville. Lord Grantham married American Cora Levinson (played by Elizabeth McGovern). Lord and Lady Grantham had three daughters, and no son. The lack of a male heir implied that the Grantham estate would pass to a male cousin, and out of the immediate family. The Grantham daughters are Lady Mary (played by Michelle Dockery), Lady Edith (played by Laura Carmichael) and Lady Sybil (played by Jessica Brown Findlay). Lady Sybil had the audacity to marry the family chauffeur, an Irish nationalist. The shame of it all …

A tranquilizer (familiarly “tranq, trank”) is a downer, a drug designed to reduce tension or anxiety. Tranquilizers can also used to sedate animals.

“Sallie Mae” is a nickname for SLM Corporation, created in 1972 by the US government as the Student Loan Marketing Association. By 2004 the government had severed all its ties with Sallie Mae, and today SLM is basically a profit-focused lender.

Something described as seriocomic has both serious and comical elements, but generally the comic side predominates.

45. Excalibur was his sword : ARTHUR

Excalibur is the legendary sword of the legendary King Arthur of Great Britain. In some accounts, Arthur was given the sword by the Lady of the Lake. There is sometimes confusion about the origin of Excalibur, as Arthur famously is said to have pulled a sword from a stone, hence proving him to be a true king. The Sword in the Stone is a different sword, and not Excalibur.

When shooting of a film is concluded the movie is said to “wrap”, and everyone heads to the wrap party. There is one story that “wrap” is actually an acronym for “wind, reel and print”, a reference to the transition of the filming process into post-production. But, this explanation is disputed.

47. Capital once ruled by France : HANOI

In the story of Androcles and the lion, a runaway slave named Androcles takes shelter in a cave. Inside he finds a wounded lion. Androcles removes a thorn from the pad of the lion’s foot, and bandages the injured limb. Years later, Androcles is captured and is condemned to be devoured by wild animals in the Circus Maximus of Rome. The lion that he faces turns out to be the lion that he befriended, and so he is able to demonstrate to the crown in the Circus that he can tame the beast. As a result, the Roman Emperor pardons Androcles. A similar story known as “The Shepherd and the Lion” emerged in the Middle Ages, and was attributed to Aesop of “fable” fame.

“Narc” is a slang term for a law enforcement officer who tracks down criminals associated with illegal drugs. “Narc” is short for “narcotics officer”. Narcs might work for the Drug Enforcement Administration (DEA).