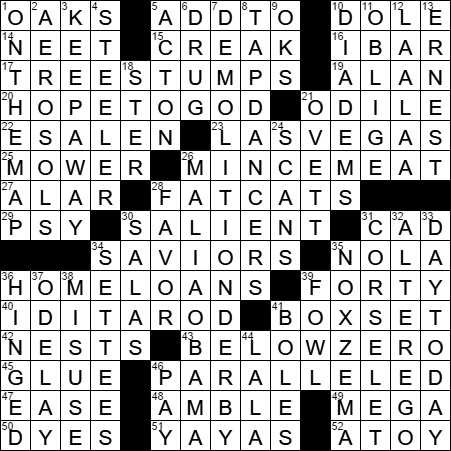 CROSSWORD CONSTRUCTOR: Stu Ockman
THEME: None
BILL BUTLER’S COMPLETION TIME: Did not finish!
ANSWERS I MISSED: Several, all in the bottom-right

Today’s Wiki-est, Amazonian Googlies
Across
10. Handouts, with “the” : DOLE
The word “dole”, meaning “financial relief”, originated as the Old English word “dal”, the state of sharing, giving out. The phrase “on the dole”, relating to institutional relief, dates back to the twenties.

14. Old competitor of Bikini Bare : NEET
The hair removal product “Neet” was launched in Canada in 1901, and was also sold as “Immac”. Today it is sold under the name “Veet”.

19. Bean in a pod? : ALAN
Alan Bean is a former astronaut. Bean was the fourth man to walk on the moon, roaming the moon’s surface with Pete Conrad as part of the Apollo 12 mission. Bean resigned from NASA in 1981 and turned to painting. He is the only artist in the world to have incorporated real moon dust into his works.

21. Von Rothbart’s daughter, in ballet : ODILE
“Swan Lake” is such a delightfully light and enjoyable ballet by Pyotr Ilyich Tchaikovsky. “Swan Lake” tells the story of Odette, a princess turned into a swan by a sorcerer. The ballet also features Odile, Odette’s “evil twin”. Odile is disguised to look like Odette with the goal of tricking the prince to fall in love with her. In the ballet, the roles of Odette and Odile are played by the same ballerina. Odette’s love interest is Prince Siegfried, the only character in the ballet to appear in all four acts.

22. New Age retreat in Big Sur : ESALEN
Esalen is a retreat centre in Big Sur, California that was opened in 1962. The center is located on the coast, about 50 miles south of Monterey. It takes its name from the Esselen Native American tribe that once lived in the area where the institute is located.

23. Paradise is next to it : LAS VEGAS
The town of Paradise, Nevada lies adjacent to the city of Las Vegas. Paradise is home to McCarran Airport, the University of Nevada, and even most of the Las Vegas Strip. Who knew?!

25. Diamond cutter? : MOWER
That would be a baseball diamond.

27. Now-regulated growth regulator : ALAR
The chemical name for Alar, a plant growth regulator and color enhancer, is daminozide. Alar was primarily used on apples but was withdrawn from the market when it was linked to cancer.

29. One-named singer with the 2013 top 5 hit “Gentleman” : PSY
PSY is the stage name of South Korean rapper Park Jae-sang. PSY became an international star when his 2102 music video “Gangnam Style” went viral on YouTube. That video had over 1 billion views on YouTube in about six months, making it the most viewed YouTube video clip of all time. I am not one of that billion …

31. Dreadful date, maybe : CAD
Our word “cad”, meaning “a person lacking in finer feelings”, is a shortening of the word “cadet”. “Cad” was first used for a servant, and then students at British universities used “cad” as a term for a boy from the local town. “Cad” took on its current meaning in the 1830s.

35. Jazz Fest setting, informally : NOLA
The city of New Orleans, Louisiana has the nickname “The Big Easy”. This name might come from the early 1900s when musicians found it relatively “easy” to find work there. The city is also known by the acronym NOLA, standing for New Orleans (NO), LA.

36. Dollars for quarters? : HOME LOANS
We use the term “quarters” for a place of abode, especially housing for military personnel. Back in the late 16th century, quarters were a portion (quarter) of a town reserved for a military force.

39. Card count in ombre : FORTY
Ombre is a card game, with the name derived from the Spanish word for “man” (“hombre”). Ombre is a trick-taking game, very popular in the 16th century and of significant importance in the history of card games. Ombre was the first game in which trumps were determined by rounds of bidding rather than just the luck of the draw. This of course is an important feature in other games today, most notably bridge.

40. Annual event covering about 1,000 miles : IDITAROD
The Iditarod Trail Sled Dog Race covers an incredible 1,161 miles, from Anchorage to Nome in Alaska. The race starts every year on the first Saturday in March, with the first race having been held in 1973. The fastest finishing time was set in 2002 at just under 9 days. The first few races only used a northern route, but then a southern route was added to the roster every second year. It’s kind of a good thing, because when the racers take the northern route they don’t even pass through the town of Iditarod!

Down
2. Some whipped creams : AEROSOLS
Strictly speaking, the term “aerosol” defines a suspension of either liquid droplets or solid particles in a gas. A good example of an aerosol is smoke. We tend to use the “aerosol” to describe what comes out of a spray can, even though the liquid droplets usually fall out of the gas and don’t stay suspended.

4. A.F.C. North player : STEELER
The Pittsburgh Steelers football team were founded in 1933, making them the oldest franchise in the AFC. Back in 1933, the team was known as the Pittsburgh Pirates. The Pirates name was chosen as the Pittsburgh baseball team was the Pirates. The name was changed to the Steelers in 1940, and then the Steagles in 1943 when the team merged with the Philadelphia Eagles. There was a further merger in 1944, with the Chicago Cardinal to form Card-Pitt. From 1945, the Steelers name was resurrected.

10. Jeweled headwear : DIADEMS
A diadem is a type of crown that is worn as a sign of royalty. The original diadem wasn’t made of metal and was simply an embroidered silk ribbon that was worn by a king as a symbol of his authority.

12. One of the Teletubbies : LAA-LAA
“Teletubbies” is a children’s television show produced by the BBC in the UK and shown over here on PBS. The show attracted a lot of attention in 1999 when Jerry Falwell suggested that one of the Teletubbies characters (Tinky Winky) was a homosexual role model for children.

26. The Secret Service dubbed her “Radiance” : MALIA OBAMA
By tradition, the Secret Service code names used for the US President and family all start with the same letter. For the Obama First Family, that letter is R:

For the Bush First Family, the code names starts with the letter T:

34. Foyer furniture : SETTEES
“Settee” is another word for a couch. The term come from the Old English “setl”, which was a long bench with a high back and arms.

37. Beck album with the alternative hit “Where It’s At” : ODELAY
“Beck” is the stage name of Bek David Campbell, an American alternative rock musician.