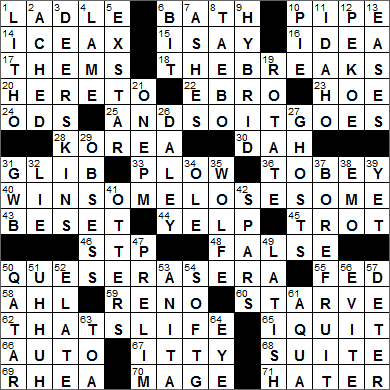 CROSSWORD SETTER: Timothy Polin
THEME: Phrases of Recognition
Each of today’s themed clues is the same: “Phrase of resignation”.

Today’s Wiki-est, Amazonian Googlies
Across
1. Punch bowl dipper : LADLE
The drink we call “punch” can be either alcoholic or nonalcoholic, but usually contains some fruit juice and/or fruit. The original “punch” was served in India, and the name comes from the Hindi word “panch” meaning “five”. This name was used because the traditional drink had “five” ingredients: alcohol, sugar, lemon, water and tea or spices.

24. Some E.R. cases : ODS
Someone taking an overdose (OD) often ends up in an emergency room (ER).

28. Land divided by the 38th parallel : KOREA
Korea was occupied by the Japanese military from 1910 until Japan surrendered at the end of WWII in 1945. While the UN was working towards a trusteeship administration for Korea, the Soviet Union managed the Korean Peninsula north of the 38th parallel and the US managed the south. The UN’s plans came to naught as the Cold War dictated the establishment of the two separate states of North Korea and South Korea. North Korea invaded the South in 1950, leading to the Korean War. After three years of fighting, the border between the two states became the demarcation line between the two military forces on the day the Armistice Agreement was signed. That line runs diagonally across the 38th parallel, and is better known as the Korean Demilitarized Zone (DMZ).

36. Maguire who played Spider-Man : TOBEY
The actor Tobey Maguire is most associated with the role of Spider-Man these days. I’m not much into comic book hero films, but I do kind of enjoy the understated way that Maguire takes on “Spidey”. Maguire has appeared in other hit films, like “Pleasantville” (1998), “The Cider House Rules” (1999) and “Seabiscuit” (2003). Off the screen, he is big into poker and it’s said that he has won over $10 million playing poker in Hollywood.

46. Brand at the Daytona 500 : STP
STP is a brand name for automotive lubricants and additives. The name STP comes from “Scientifically Treated Petroleum”.

50. Phrase of resignation : QUE SERA SERA
As Doris Day told us, “que sera sera” is Spanish for “whatever will be, will be”.

58. Developmental rink org. : AHL
The American Hockey League (AHL) is the so-called development circuit for the National Hockey League (NHL), the equivalent of the minors in professional baseball. The AHL’s playoff trophy is called the Calder Cup, which is named for Frank Calder who was the first president of the NHL.

59. Former attorney general Janet : RENO
Janet Reno was Attorney General of the US from 1993 to 2001. Reno was the person to hold the office second longest, and was our first female Attorney General. In 2002, Reno ran for Governor of Florida but failed to win the Democratic nomination. Thereafter she retired from public life.

66. VW or BMW : AUTO
VW stands for Volkswagen, which translates from German into “people’s car”. The original Volkswagen design was the Beetle and was built under a directive from Adolf Hitler, who wanted a cheap car built that ordinary people could afford to purchase. He awarded the contract to engineer Ferdinand Porsche, whose name (paradoxically) would forever be associated with high performance, expensive cars. The Beetle was the official name of the VW model released in North America, but it was usually referred to as a “Bug” here in the US, and a “Beetle” elsewhere in the world.

The abbreviation BMW stands for Bayerische Motoren Werke, which translates into Bavarian Motor Works. BMW was making aircraft engines during WWI, but had to cease that activity according to the terms of the Treaty of Versailles. The company then started making motorcycles, and moved into automobile production starting in 1928. BMW moved back into aircraft engine manufacturing during the build-up of the Luftwaffe prior to WWII.

70. Wizard : MAGE
Mage is an archaic word for a magician.

Down
1. Collectible art print, in brief : LITHO
Lithography is a printing technique that was invented in 1796 as a cheap way to publish theatrical works. In the litho process the image is drawn on a metal plate, although originally it was drawn on a stone (hence the prefix “litho-“). The image is drawn in such a way that some regions of the plate repel ink, and then when paper is applied to the plate, those areas are ink-free. A “lithograph” is a print that is made using the technique, and is often a reproduction of a work of art.

7. What a phoenix rises from, with “the” : ASHES
The phoenix is a fabulous bird of Greek mythology, which can also be found in the mythologies of Persia, Egypt and China. The phoenix is a fire spirit, which lives from 500 to 1000 years. At the end of its lifespan is builds a nest for itself (a pyre) and self-ignites, burning itself and the nest, creating a pile of ashes. A young phoenix arises from the ashes and the cycle starts all over again.

8. Cardio workout regimen : TAE BO
Tae Bo isn’t an ancient martial art, even though it perhaps sounds like one. The discipline was developed as a form of aerobic exercise in the 1990s by taekwondo expert Billy Blanks who gave it the name Tae Bo, a melding of “taekwondo” and “boxing”.

9. Toyota Prius, e.g. : HYBRID
The Toyota Prius is still the most fuel-efficient, gasoline-powered car sold in the US, according to the EPA. The name “Prius” is a Latin word meaning “ahead, leading”. In the US we pronounce the name “pree-us”, but across the Atlantic it’s pronounced “pry-us”. Oh, and I drive one …

10. Thanksgiving dessert : PIE
Thanksgiving Day was observed on different dates in different states for many years, until Abraham Lincoln fixed the date for the whole country in 1863. Lincoln’s presidential proclamation set that date as the last Thursday in November. In 1941, President Franklin D. Roosevelt moved the holiday to the fourth Thursday in November, arguing that the earlier date would give the economy a much-needed boost.

11. Washington/Montana separator : IDAHO
The US state of Idaho has a panhandle that extends northwards between Washington and Montana, right up to the border with Canada. Across that border is the Canadian province of British Columbia. Most of Idaho is in the Mountain Time Zone, but Northern Idaho (the Panhandle) is in the Pacific Time Zone.

12. Type of black tea : PEKOE
A pekoe (or more commonly “orange pekoe”) is a medium-grade black tea. There is no orange flavor in an orange pekoe tea. The “orange” name most likely derived from the name of the trading company that brought the tea to Europe from Asia.

26. Big name in Chicago politics : DALEY
Richard J. Daley was the Mayor of Chicago for 21 years (1955-1976), making him the longest-serving mayor for the city in history. His son, Richard M. Daley, was mayor until relatively recently, and was the city’s second-longest serving mayor.

35. Tom who wrote “The Electric Kool-Aid Acid Test” : WOLFE
The American author Tom Wolfe started out his career as a journalist, and was very much at the center of the New Journalism literary movement of the sixties and seventies. His first book of note was “The Electric Kool-Aid Acid Test” that tells the story of Ken Kesey and his Merry Pranksters. Wolfe also wrote “The Right Stuff” about the post-war test pilots and the Project Mercury astronauts.

41. Frolicking mammals : OTTERS
The fur of the sea otter is exceptionally thick. It is in fact the densest fur in the whole animal kingdom.

50. Only U.N. member whose name comes alphabetically between P and R : QATAR
Qatar is a sovereign state in the Middle East occupying the Qatar Peninsula, itself located in the Arabian Peninsula. Qatar lies on the Persian Gulf and shares one land border, with Saudi Arabia to the south. Qatar has more oil and gas reserves per capita of population than any other country in the world. In 2010, Qatar had the fastest growing economy in the world, driven by the petrochemical industry. Qatar is scheduled to host the 2022 FIFA World Cup, although the nation’s eligibility to do so is under question after a far-reaching bribery scandal was uncovered at the sport’s governing body.

64. CBS logo : EYE
CBS is the second-largest broadcaster in the world, second only to the BBC in the UK. CBS introduced its “eye” logo in 1951.