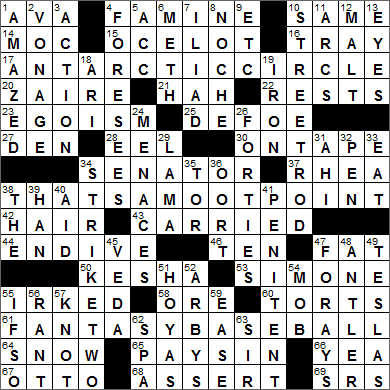 CROSSWORD SETTER: Zhouqin Burnikel
THEME: A Number of Letters … today’s grid has three 15-letter answers in the across-direction. We also have three themed answers in the down-direction that sound like they are describing four letters in the long answers. Very, very inventive:

17A. Where the midnight sun can be observed ANTARCTIC CIRCLE
4D. What 17-Across has, phonetically FORESEES (sounds like “4 Cs”)

61A. Rotisserie League game FANTASY BASEBALL
47D. What 61-Across has, phonetically FORAYS (sounds like “4 As”)

Today’s Wiki-est, Amazonian Googlies
Across
1. DuVernay who directed “Selma” AVA
Ava DuVernay is a filmmaker who became the first African American woman to win the Best Director Prize at the Sundance Film Festival, a feat she achieved in 2012 for her feature film “Middle of Nowhere”. “Middle of Nowhere” tells the story of a woman who drops out of medical school to focus on husband when he is sentenced to 8 years in prison. More recently, DuVernay was nominated for a Golden Globe for directing the 2014 historical drama “Selma”.

“Selma” is a 2014 film about the Selma to Montgomery voting rights marches of 1965. The film stars British actors David Oyewale as Dr. Martin Luther King, Jr. and Tom Wilkinson as President Lyndon Johnson. “Selma” was received extremely well by critics and audiences alike. That said, there is some criticism about the way President Johnson is portrayed as being less supportive of civil rights than is assumed to be the case in reality.

4. Cause of 1840s-’50s emigration from Ireland FAMINE
The Great Famine was a period in Ireland between 1845 and 1852 when about a million died from hunger and disease, and another million people had little choice but to emigrate. The end result was a drop in the country’s population of 20-25%. The root cause of the famine was an outbreak of potato blight, devastating the crop on which most of the population depended for sustenance. One of the terrible legacies of the famine was that wealthy landowners and merchants were exporting grain from Ireland, while the majority of the population was starving.

15. Spotted wildcat OCELOT
The ocelot is found mainly in South and Central America, although there have been sightings as far north as Arkansas. An ocelot doesn’t look too different from a domestic cat, and some have been kept as pets. Perhaps most famously, Salvador Dali had one that he carried around everywhere with him.

The summer phenomenon of “midnight sun” occurs north of the Arctic Circle and south of the Antarctic Circle. At those locations, and at those times of the year, the sun is visible at midnight, and indeed for the full 24 hours.

20. African nation renamed in 1997 ZAIRE
The African nation once called Zaire is a neighbor of Rwanda. The genocide and war in Rwanda spilled over into Zaire in 1996, with the conflict escalating into what is now called the First Congo War. As part of the war’s fallout there was a regime change, and in 1997 Zaire became the Democratic Republic of Congo.

23. Diva’s problem EGOISM
“Diva” comes to us from Latin via Italian. “Diva” is the feminine form of “divus” meaning “divine one”. The word is used in Italy to mean “goddess” or “fine lady”, and especially is applied to the prima donna in an opera. We often use the term to describe a singer with a big ego.

25. Daniel who created Friday DEFOE
Daniel Defoe is most famous today as an author, of the novel “Robinson Crusoe” in particular. Defoe was also a trader, and a spy for King William III.

In Daniel Defoe’s 1719 novel “Robinson Crusoe”, the castaway encounters a companion that Crusoe calls “Friday”, because the two first met on that day. Friday soon becomes his willing servant. This character is the source of our terms “Man Friday” and “Girl Friday”, which are used to describe a particularly competent and loyal assistant.

28. ___ pie (old British dish) EEL
Eel pie is a traditional dish associated with the working classes in London, England especially during the Victorian era. Eel was chosen as an ingredient as it was one of the few fish that could live in the polluted River Thames.

34. One out of 100 SENATOR
The six-year terms enjoyed by US senators are staggered, so that every two years about one third of the 100 US Senate seats come up for reelection.

“Better Call Saul” is a spinoff drama series from the hit show “Breaking Bad”. The main character is small-time lawyer Saul Goodman, played by Bob Odenkirk, who featured in the original series. “Better Call Saul” is set six years before Goodman makes an appearance in the “Breaking Bad” storyline. The lawyer’s real name is James Morgan McGill, and his pseudonym is a play on the words “S’all good, man!”

44. Bitter salad green ENDIVE
Endive is a leaf vegetable belonging to the chicory genus, and is in the daisy family. Endive is also known as escarole.

53. Nina of jazz SIMONE
Nina Simone was the stage name of Eunice Waymon. Simone was very much associated with jazz music, although she really wanted to be a classical musician early in her career, inspired by a love for the music of Bach.

60. Grounds for lawsuits TORTS
The word “tort” is a French word meaning “mischief, injury or wrong”. Tort law is generally about negligence, when the action of one party causes injury to another but that action falls outside of the scope of criminal law.

61. Rotisserie League game FANTASY BASEBALL
Rotisserie League Baseball is a version of fantasy baseball that uses a particular scoring system that was popularized by a group of journalists. The apparently strange name for the league is a reference to the New York restaurant La Rotisserie Française, where the founders met to first play the game.

64. Pre-cable TV problem SNOW
Back in the bad old days, “snow” was the random pattern superimposed over a television picture that was caused by random noise being picked up by the TV’s antenna. How soon we forget …

67. “The Simpsons” bus driver OTTO
Otto Mann drives the school bus on the TV show “The Simpsons”. Otto is a Germanic character voiced by Harry Shearer, and his name is a play on “Ottoman Empire”. Whenever Bart sees him, he greets Otto with the words “Otto, man!”

Down
2. Internet-based phone provider VONAGE
Vonage is a company that provides telephone service over the Internet, so called voice over IP (VoIP).

3. Kung fu movie genre ACTION
In the west we sometimes use the term kung fu to mean a Chinese martial art. We’ve gotten the wrong idea though as the term “kung fu” really describes any skill that can be learned through dedication and hard work. So, kung fu can indeed describe a martial art, but by no means exclusively.

5. Georgia Tech’s athletic org. ACC
The Georgia Institute of Technology (commonly “Georgia Tech”) is located in Atlanta. The school was founded in 1885 as part of the reconstruction effort to rebuild the infrastructure in the South after the Civil War. President Theodore Roosevelt delivered an address to the school in 1905, and then shook hands with every single student. Back then the school didn’t have over 20,000 students as it does today …

7. Tale of Troy ILIAD
“The Iliad” is an epic poem by the Greek poet Homer, which tells the story of the ten-year siege of Ilium (also known as Troy) during the Trojan war. “The Odyssey”, also attributed to Homer, is sometimes described as a sequel to “The Iliad”.

8. Night, in Nicaragua NOCHE
Nicaragua is the largest country in Central America, lying between Honduras to the north, and Costa Rica to the south. The etymology of the name “Nicaragua” is not very certain. One suggestion is that it is a melding of the name “Nicarao” and “agua”, the Spanish for “water”. Nicarao was the name of the largest city in the area when the Spanish arrived, and it is thought that “agua” refers to the two large lakes: Lake Managua and Lake Nicaragua.

10. Souped-up vintage auto STREET ROD
A “hot rod” is an American car that has been modified for speed by installing a larger than normal engine. A “street rod” is generally a more comfortable type of “hot rod”, with the emphasis less on the engine and more on custom paint jobs and interiors. By definition, a street rod must be based on an automobile design that originated prior to 1949.

12. Brewer’s ingredient MALT
Malt is germinated cereal grains that have been dried. The cereal is germinated by soaking it in water, and then germination is halted by drying the grains with hot air.

18. Singer Grande, to fans ARI
Ariana Grande is a singer and actress from Boca Raton, Florida. Grande plays the role of Cat Valentine on the sitcom “Victorious” that aired for four season on Nickelodeon. Grande’s singing career took off with the release of the 2011 album “Victorious: Music from the Hit TV Show”.

36. ___ cloud (source of comets) OORT
The Oort Cloud is a hypothetical spherical cloud of comets that lies about a light-year from the sun. It is postulated that periodic comets that enter our solar systems (like Halley’s Comet) originate in this cloud.

39. Chinese dynasty after the Qin HAN
The Han Dynasty was the second imperial dynasty of China and lasted from 206 BC to 220 AD. It came after the Qin Dynasty, and before the Three Kingdoms.

The Qin Dynasty was established in 221 BC after the state of Qin conquered six other states. The Qin was China’s first imperial dynasty, and lasted until 206 BC when the Han Dynasty wielded power.

45. Hindu sacred writing VEDA
The Vedas are a body of ancient Indian texts, the oldest Hindu scriptures. The word “véda” is Sanskrit, and means “knowledge, wisdom”.

49. Cars since 2006 TESLAS
Tesla Motors is a manufacturer of electric vehicles based in Palo Alto, California. Tesla is noted for producing the first electric sports car, called the Tesla Roadster. The current base price of a roadster is about $100,000, should you be interested …

51. Georgetown athletes HOYAS
The athletic teams of Georgetown University are known as the Hoyas. The name is derived from “Hoya Saxa”, a traditional cheer yelled out at Georgetown games as far back as 1893. The term is a mixture of Greek and Latin, with the Greek word “hoya” meaning “such” or “what”, and “saxa” translating from Latin as “rocks” or “small stones”. The cheer is usually rendered in English as “what rocks!”.

52. “We have the meats” fast-food chain ARBY’S
The Arby’s chain of fast food restaurants was founded in 1964 by two brothers, Forrest and Leroy Raffel. The name “Arby’s” is a homonym of “RB’s”, standing for “Raffel Brothers”.

57. Macramé feature KNOT
Macramé is a way to make cloth that uses a knotting technique rather than weaving or knitting. Macramé was popularised at sea, where sailors would decorate the likes of knife handles, bottles and even parts of the ship.

63. Elton John title SIR
Elton John’s real name is Reginald Dwight. Sir Elton was knighted in 1998, not for his music but for his charitable work. He founded his own Elton John AIDS Foundation back in 1992.