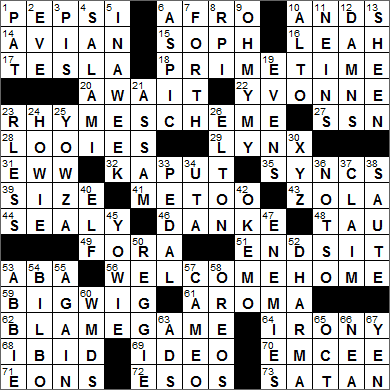 CROSSWORD SETTER: Paula Gamache
THEME: Me Too … today’s themed answer comprise TWO words, each ending with the letters ME:

41A. Copycat’s comment … or, phonetically, a hint to this puzzle’s theme : ME TOO (sounds like “ME TWO”)

Today’s Wiki-est, Amazonian Googlies
Across
1. Coke rival : PEPSI
The Pepsi-Cola formulation was developed by one Caleb Bradham who made the drink at home and sold it as “Brad’s Drink”. Bradham’s aim was to provide a drink that was pleasant to taste, that would aid digestion and boost energy. Included in the formula were pepsin (a digestive enzyme) and kola nuts. These two ingredients inspired the brand name we use today: Pepsi-Cola.

14. Birdlike : AVIAN
“Avis” is the Latin word for a bird, giving rise to our adjective “avian” meaning “relating to birds”.

15. Next year’s jr. : SOPH
The term “sophomore” has been used for a student in the second year of university since the 1680’s. The original meaning of the word was “arguer”. The term has Greek roots, from two Greek words that have been artificially combined in English. The Greek “sophos” means “wise”, and “moros” means “foolish”.

16. Wife of Jacob : LEAH
According to the Bible, Leah was one of the two wives of Jacob, the other being Leah’s sister Rachel. Jacob’s intention had been to marry Rachel, but the Leah and Rachel’s father “switched” his daughters and provided Leah as the veiled bride. Jacob married Rachel a week later, and lived with the two wives concurrently.

17. Electric car maker : TESLA
Tesla Motors is a manufacturer of electric vehicles based in Palo Alto, California. Tesla is noted for producing the first electric sports car, called the Tesla Roadster. The current base price of a roadster is about $100,000, should you be interested …

27. Tax form ID : SSN
The main purpose of a Social Security Number (SSN) is to track individuals for the purposes of taxation, although given its ubiquitous use, it is looking more and more like an “identity number” to me. The social security number system was introduced in 1936. Prior to 1986, an SSN was required only for persons with substantial income so many children under 14 had no number assigned. For some years the IRS had a concern that a lot of people were claiming children on their tax returns who did not actually exist. So, from 1986 onward, it is a requirement to get an SSN for any dependents over the age of 5. Sure enough, in 1987 seven million dependents “disappeared”.

28. Superiors of sarges : LOOIES
A lieutenant (looie) is higher in rank than a sergeant (sarge).

29. Wildcat with tufted ears : LYNX
A lynx is a wild cat, of which there are four species. These are:

– The Eurasian lynx: the biggest of the four species.
– The Canada lynx: well-adapted to life in cold environments.
– The Iberian lynx: a native of the Iberian Peninsula in Southern Europe, and the most endangered cat species in the world.
– The Bobcat: our North American wildcat, the smallest of the four lynxes

32. D-E-A-D dead : KAPUT
“Kaput” is a familiar term meaning “incapacitated, destroyed”, and comes to us from French (via German). The original word “capot” means “not having won a single trick” in the French card game called Piquet.

43. Émile of the Dreyfus Affair : ZOLA
The most famous work of French writer Émile Zola is his 1898 open letter “J’Accuse!” written to then French president Félix Faure. The letter was published on the front page of a leading Paris newspaper, and accused the government of anti-Semitism in its handling of the trial of Captain Alfred Dreyfus. Dreyfus was a Jewish military officer in the French army, falsely accused and convicted of spying for Germany. Even after the error was discovered, the government refused to back down and let Dreyfus rot away on Devil’s Island rather than admit to the mistake. It wasn’t until 1906, 12 years after the wrongful conviction, that Dreyfus was freed and reinstated, largely due to the advocacy of Emile Zola.

44. Mattress brand : SEALY
The Sealy Corporation makes mattresses. The company name comes from the city where it started out in 1881, namely Sealy, Texas. Sealy Corporation is now headquartered in Trinity, North Carolina.

48. Letter between sigma and upsilon : TAU
Tau is the 19th letter of the Greek alphabet, the letter which gave rise to our Roman “T”. Both the letters tau (T) and chi (X) have long been symbolically associated with the cross.

49. Roman marketplaces : FORA
The Roman forum was the public space in the middle of a city, taking it’s name from the Latin word “forum” meaning “marketplace, town square”.

68. Abbr. in a footnote : IBID
Ibid. is short for the Latin word “ibidem” and is typically found in footnotes and bibliographies. Ibid. is used to refer the reader to the prior citation, instead of giving the same information all over again (title, author etc.).

70. Roast host : EMCEE
The term “emcee” comes from “MC”, an initialism standing for Master or Mistress of Ceremonies.

73. One side of a Faustian bargain : SATAN
Faust is a character from a classic German legend who makes a pact with the devil. He agrees to exchange his soul for worldly gratification and unlimited knowledge.

4. Deli meat : SALAMI
Salame (note the “e” at the end) is an Italian sausage that is traditionally associated with the peasant classes. The meat in the sausage is preserved with salt, and it can be hung and stored for as long as ten years. The name “salame” comes from “sale”, the Italian word for salt, and “-ame”, a suffix indicating a collective noun. Our English word “salami” is actually the Italian plural for “salame”.

6. Savory jelly : ASPIC
Aspic is a dish in which the main ingredients are served in a gelatin made from meat stock. “Aspic” is a French word for “jelly”.

8. Sch. in Troy, N.Y. : RPI
The Rensselaer Polytechnic Institute (RPI) is a private school in Troy, New York. The university is named after its founder Stephen Van Rensselaer who set up the school in 1824. The goal of RPI has always been the “application of science to the common purposes of life”, an objective set by the founder. Given that, the name for the school’s sports teams is quite apt: the Engineers.

11. Dresden denials : NEINS
The German city of Dresden was almost completely destroyed during WWII, especially as a result of the famous firebombing of the city in 1945. Restoration work in the inner city in recent decades led to it being designated as a UNESCO World Heritage Site However, in 2006 when the city built a highway bridge close to the city center, UNESCO took Dresden off the list. This marked the only time a European location has lost World Heritage status.

21. Indian state known for its tea and silk : ASSAM
Assam is a state in the very northeast of India, just south of the Himalayas. Assam is noted for its tea as well as its silk.

23. Like non-oyster months : R-LESS
There is a traditional warning that one shouldn’t eat shellfish in a month without an R i.e. May through August. That’s because these are the warmer months here in the northern hemisphere when algae blooms can spread toxins that are soaked up by clams, mussels and oysters. Personally, I only eat shellfish in months containing a Q … that would be never …

24. Comic Mandel : HOWIE
Howie Mandel is a Canadian “funny guy”. He’s making a lot of money a few years ago as host of “Deal or No Deal”, and now as a judge on “America’s Got Talent”. But I remember him from “St. Elsewhere” in the eighties, the first American TV show that I started to watch regularly when I moved to the US.

34. Tony winner Hagen : UTA
Uta Hagen was a German-born American actress. Hagen married Jose Ferrer in 1938, but they were divorced ten years later after it was revealed that she was having a long-running affair with Paul Robeson. Her association with Robeson, a prominent civil rights activist, earned her a spot on the Hollywood Blacklist during the McCarthy Era. This forced her away from film, but towards a successful stage career in New York City.

38. Pan-frying instruction : SAUTE
“Sauté” is a French word. The literal translation from the French is “jumped” or “bounced”, a reference to the tossing of food while cooking it in a frying pan.

42. Vermont skiing destination : OKEMO
Okemo is a ski resort near Ludlow, Vermont. If you visit Okemo, you’ll see that it’s also home to the Timber Ripper roller coaster, which operates year round. The Timber Ripper became the state of Vermont’s first roller coaster when it opened for business in December, 2010.

50. Jackson who was on five World Series-winning teams in the 1970s : REGGIE
Former baseball player Reggie Jackson is known as “Mr. October” because of his memorable post-season performances.

52. Cosmic order, in Buddhism : DHARMA
In the context of Buddhism, “dharma” can mean the collection of teachings and doctrines of the faith. The term is also used to describe proper and correct behavior that maintains the natural order of things.

53. Hoffman of 1960s radicalism : ABBIE
Abbie Hoffman was the founder of the “Yippies”, an activist group that had violent clashes with the police during the 1968 Democratic National Convention in Chicago.

57. One of many Hitchcock appearances in his own films : CAMEO
Even in my day, a cameo role was more than just a short appearance in a movie (or other artistic piece). For the appearance to be a cameo, the actor had to playing himself or herself, and was instantly recognizable. With this meaning it’s easy to see the etymology of the term, as a cameo brooch is one with the recognizable carving of the silhouette of a person. Nowadays, a cameo is any minor role played by a celebrity or famous actor, regardless of the character played.

Alfred Hitchcock makes a cameo appearance in 39 of his 52 movies. My favorite, and perhaps the most innovative, is in the movie “Lifeboat”. In the film, there is a limited cast, just the people in a lifeboat and no extras. Hitchcock managed to make his appearance in a print ad in a newspaper read by one of the survivors in the boat.

58. Sandwich cookies now sold by Mondelez : OREOS
The Oreo cookie was first introduced in 1912. The Oreo was intended to be a competitor to the very similar Hydrox cookie which had debuted four years earlier. The Oreo won the resulting battle on the grocery store shelves …

In 2012, Kraft foods split into two companies, one specializing in snack-foods and the other in grocery items. The grocery company retained the Kraft name, and later merged with Heinz to become Kraft Heinz. The employees of the snack-food company chose the new name of Mondelez themselves. “Mondelez” is a portmanteau of the words for “world” and “delicious” in Romance languages.

60. Iraq war concerns, for short : WMDS
The first recorded use of the term “Weapon of Mass Destruction” (WMD) was in 1937. The words were used by Cosmo Gordon Lang, the Archbishop of Canterbury at the time, in reference to the bombardment of Guernica in Spain during the Spanish Civil War by the German Luftwaffe. He said, “Who can think without horror of what another widespread war would mean, waged as it would be with all the new weapons of mass destruction?”

67. Tokyo currency : YEN
The yen replaced the ryo as the unit of currency in Japan in 1871.