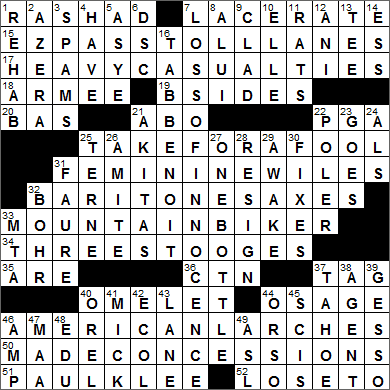 15. Some highway conveniences : E-ZPASS TOLL LANES
E-ZPASS was a technology development driven (pun!) by the tolling agencies of New York, New Jersey and Pennsylvania. The first E-ZPASS toll booth was built on the New York Thruway, and opened at the Spring Valley toll plaza in 1993.

20. ___-relief : BAS
In bas-relief, an image projects just a little above the background, as in perhaps a head depicted on a coin.

21. Blood letters : ABO
The most important grouping of blood types is the ABO system. Blood is classified as either A, B, AB or O, depending on the type of antigens on the surface of the red blood cells. A secondary designation of blood is the Rh factor, in which other antigens are labelled as either positive or negative. When a patient receives a blood transfusion, ideally the donor blood should be the same type as that of the recipient, as incompatible blood cells can be rejected. However, blood type O-neg can be accepted by recipients with all blood types, A, B, AB or O, and positive or negative. Hence someone with O-neg blood type is called a “universal donor”.

22. Green org.? : PGA
The Professional Golfers’ Association (PGA) was founded in 1916 and today has its headquarters (unsurprisingly) in Florida, where so many golfers live. Back in 1916, the PGA was based in New York City.

34. Fine source of humor, with “the”? : THREE STOOGES
Larry Fine was one of the Three Stooges.

If you’ve seen a few of the films starring “The Three Stooges” you’ll have noticed that the line up changed over the years. The original trio was made up of Moe and Shemp Howard (two brothers) and Larry Fine (a good friend of the Howards). This line up was usually known as “Moe, Larry and Shemp”. Then Curly Howard replaced his brother when Shemp quit the act, creating the most famous trio, “Moe, Larry And Curly”. Shemp returned when Curly had a debilitating stroke in 1946, and Shemp stayed with the troupe until he died in 1955. Shemp was replaced by Joe Besser, and then “Curly-Joe” DeRita. When Larry Fine had a stroke in 1970, it effectively marked the end of the act.

40. Cousin of a frittata : OMELET
A “frittata” is an omelet recipe from Italy. The word “frittata” is Italian, and comes from “fritto” meaning “fried”.

44. Major tributary of the Missouri : OSAGE
Much of the Osage River in Missouri is now taken up by two large reservoirs created behind two dams that provide power for St. Louis and the surrounding area. The two reservoirs are the Truman Reservoir and the Lake of the Ozarks.

46. Tamarack trees : AMERICAN LARCHES
The tamarack or American larch is a tree that is native to North America. The name “tamarack” is an Algonquian word meaning “wood used for snowshoes”.

51. “Fish Magic” artist : PAUL KLEE
The artist Paul Klee was born in Switzerland, but studied art in Munich in Germany. You can see many of Klee’s works in the San Francisco Museum of Modern Art. If you get to Bern in Switzerland, even more of them can be seen at the Zentrum Paul Klee that was opened in 2005.

Down
2. Hyundai luxury sedan : AZERA
The Hyundai Azera was the name used worldwide for the model known as the Hyundai Grandeur in its homeland of South Korea. The Azera was produced from 1986 to 1992.

3. Blasts inboxes : SPAMS
Apparently the term “spam”, used for unwanted email, is taken from a “Monty Python” sketch. In the sketch (which I’ve seen) the dialog is taken over by the word Spam, a play on the glut of canned meat in the markets of Britain after WWII. So “spam” is used for the glut of emails that takes over online communication. I can just imagine nerdy Internet types (like me) adopting something from a “Monty Python” sketch to describe an online phenomenon …

5. “___ sow …” : AS YE
The commonly quoted line “As ye sow, so shall ye reap” is not actually a direct quote from the Bible, although the sentiment is expressed there at least twice. In the Book of Job is the line “They that plow iniquity, and sow wickedness, reap the same”. In the Epistle of Paul to the Galatians is the line “Be not deceived; God is not mocked: for whatsoever a man soweth, that shall he also reap”.

6. Award since W.W. I : DSC
The Distinguished Service Cross (DSC) is the second highest honor awarded to members of the US Army. The DSC is equivalent to the Navy Cross and the Air Force Cross.

7. Outcome in Eden : LOSS OF INNOCENCE
In the Christian tradition, the “fall of man” took place in the Garden of Eden when Adam and Eve succumbed to the temptation of eating the fruit from the tree of knowledge of good and evil, against the bidding of God. As a result, Adam and Eve were banished from Eden to prevent them becoming immortal by eating from the tree of life. The first humans had transitioned from a state of innocent obedience to a state of guilty disobedience.

10. Glamour rival : ELLE
“Elle” magazine was founded in 1945 in France and today has the highest circulation of any fashion magazine in the world. “Elle” is the French word for “she”. “Elle” is published monthly worldwide, although you can pick up a weekly edition if you live in France.

The women’s monthly magazine “Glamour” was founded in 1939 as “Glamour of Hollywood”.

12. “Star Wars” saga nickname : ANI
Anakin “Ani” Skywalker is the principal character in the first six of the “Star Wars” movies. His progress chronologically through the series of films is:

– Episode I: Anakin is a 9-year-old slave boy who earns the promise of Jedi training by young Obi-Wan Kenobi.
– Episode II: Anakin is 18-years-old and goes on a murdering rampage to avenge the killing of his mother.
– Episode III: Anakin is 21-years-old and a Jedi knight, but he turns to the Dark Side and becomes Darth Vader. His wife Padme gives birth to twins, Luke and Leia Skywalker.
– Episode IV: Darth Vader, comes into conflict with his children, Luke Skywalker and the Princess Leia.
– Episode V: Darth Vader attempts to coax his son Luke over to the dark side, and reveals to Luke that he is his father.
– Episode VI: Luke learns that Leia is his sister, and takes on the task of bringing Darth Vader back from the Dark Side in order to save the Galaxy. Vader saves his son from the Emperor’s evil grip, dying in the process, but his spirit ends up alongside the spirits of Yoda and Obi-Wan. They all live happily ever after …

14. What makes a top stop? : ESS
The word “top” is transformed into “stop” by adding a letter S (ess) at the beginning.

21. Husky cousins : AKITAS
The Akita breed of dog is named for its point of origin, the Akita Prefecture in Japan. When Helen Keller visited Japan in 1937, she asked for and was given an Akita breed of dog, with the name of Kamikaze-go. Sadly, the dog died within a year from distemper. The following year the Japanese government officially presented Keller with a replacement dog. Supposedly Keller’s dogs were the first members of the breed to be introduced into the US.

25. Alloy of tin and lead : TERNE
Terne is a lead-tin alloy that is used as a rust-protecting coat for steel.

27. Order to a sommelier, maybe : ONE BOTTLE
“Sommelier” is the French word for a wine steward. If that steward(ess) is a female, then the French term is “sommelière”.

31. Debussy contemporary : FAURE
Gabriel Fauré was a French composer whose most famous work has to be his elegant “Pavane”. Fauré was a student of Camille Saint-Saëns, who later became a very close friend.

32. 1922 Physics Nobelist : BOHR
Niels Bohr was a Danish physicist, who won his 1922 Nobel Prize for his work on quantum mechanics and atomic structure. Later in his life, Bohr was part of the team working on the Manhattan Project that developed the first atomic bomb. Niels Bohr and Albert Einstein had a series of public debates and disputes in the twenties and thirties. Although the two respected each other very highly, they held very different views on quantum theory, different views on the laws of physics at the atomic level. The passage of time has shown that Bohr won out in those debates.

33. 1959 Kingston Trio hit : MTA
“M.T.A.” was a 1958 hit for the Kingston Trio. The song tells of a man called Charlie who is stuck on board an MTA subway car in Boston. His problem is that “exit fares” had been introduced on the system to supplement “entrance fares” (true story!), and the man didn’t have the extra nickel needed to get off the train. The Massachusetts Bay Transportation Authority (MTBA) started issuing smart cards for use as tickets in 2006, called them “Charlie Cards” in honor of “Charlie on the MTA”.

37. Explorer alternative : TAHOE
The Chevrolet Tahoe is basically the same design as the GMC Yukon, both cars being sports utility vehicles. The Tahoe is rated at 15 mpg for city driving, but there is a hybrid version which is rated at a whopping 21 mpg …

The Ford Explorer SUV was introduced in 1990 and is still going strong.

39. Canvas primer : GESSO
Gesso is the Italian word for “chalk” and gives its name to the powdered calcium carbonate that is used as a primer coat under artistic panel paintings. The gesso is mixed with a glue and applied to wood so that it acts as an absorbent surface for paint.

40. City northeast of Kiev : OREL
Orel (also Oryol) is a city lying on the Oka River, just over 200 miles SSW of Moscow. Orel was one of the cities occupied by Germany during WWII. It was liberated in 1943, but had been almost completely destroyed.

43. The New Yorker film critic Anthony : LANE
Anthony Lane is a film critic for “The New Yorker” magazine, although he actually lives in and works from Cambridge, England. Lane tells a nice story about attending a screening of the Jodie Foster movie “Contact” on a summer’s day. He noted that the film was very gloomy, had an odd noir look for sci-fi, had creepy shadows in an outdoor scene. Then he removed his sunglasses …

46. Concert piece : AMP
An electric guitar, for example, needs an amplifier (amp) to take the weak signal created by the vibration of the strings and turn it into a signal powerful enough for a loudspeaker.

48. College final? : EDU
The .edu domain was one of the six original generic top-level domains specified. The complete original list is:

49. It’s sometimes shown in the corner of a TV screen, for short : ASL
It’s really quite unfortunate that American Sign Language (ASL) and British Sign Language (BSL) are very different, and someone who has learned to sign in one cannot understand someone signing in the other.