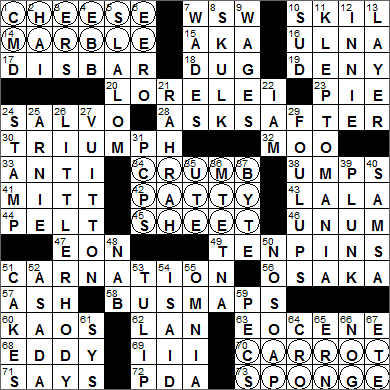 1A. It’s often said with a smile : CHEESE(CAKE)
14A. Medium for Michelangelo : MARBLE (CAKE)

Today’s Wiki-est, Amazonian Googlies
Across
1. It’s often said with a smile : CHEESE
Photographers often instruct us to say “cheese”, to elicit a smile-like expression. Even Japanese photographers use the word “cheese” for the same effect. Bulgarians use the word “zele” meaning “cabbage”. The Chinese say “eggplant”, the Danish “orange”, the Iranians “apple” and the most Latin Americans say “whiskey”.

7. Madrid-to-Lisbon dir. : WSW
Madrid is the largest city in Spain and the capital. Madrid is located very close to the geographical center of the country. It is the third-largest city in the European Union (after London and Paris). People from Madrid called themselves Madrileños.

10. Black & Decker competitor : SKIL
Skil Power Tools sold their first “Skilsaw” back in 1924, for $160. Despite almost a century of inflation, a Skilsaw can be purchased today for a fraction of that original price.

Black & Decker is a manufacturer of power tools that was founded in Baltimore in 1910 by S. Duncan Black and Alonzo G. Decker. The company’s first product was the first portable electric drill, the basic design of which we still use today.

15. Characters on a wanted poster : AKA
Also known as (aka)

24. Volley : SALVO
A salvo is a simultaneous discharge of guns. Ironically, “salvo” comes from the Latin “salve” meaning “be in good health”. Salvo was originally the name given to the firing of guns in the air as a sign of respect or greeting for an important visitor. Good health!

42. One of two in a Big Mac : PATTY
The iconic Big Mac sandwich was introduced nationally by McDonald’s in 1967. It was the creation of a Pittsburgh franchisee who offered it on the menu as a response to the very similar “Big Boy” sandwich offered by the competing Big Boy restaurant chain.

49. Bowling : TENPINS
Bowling has been around for an awfully long time. The oldest known reference to the game is in Egypt, where pins and balls were found in an ancient tomb that is over 5,000 years old. The first form of the game to come to America was nine-pin bowling, which had been very popular in Europe for centuries. In 1841 in Connecticut, nine-pin bowling was banned due to its association with gambling. Supposedly, an additional pin was added to get around the ban, and ten-pin bowling was born.

56. One terminus of a Japanese bullet train : OSAKA
The Japanese city of Osaka used to be called Naniwa, with the name changing to Osaka sometime before 1500. “Osaka” can be translated either as “large hill” or “large slope”. Osaka is sometimes referred to as “the Chicago of Japan” as it is a major center of commerce and industry.

60. Evil “Get Smart” group : KAOS
The satirical comedy series called “Get Smart” was the creation of Mel Brooks and Buck Henry, and starred Don Adams as Agent 86, Maxwell Smart. Agent 86 worked for the spy agency CONTROL, alongside the lovely Agent 99. CONTROL’s sworn enemy was the criminal organization called KAOS. Smart’s shoe phone was a hilarious prop used in almost every episode. When Smart dialed the number 117, the shoe converted into a gun. Cool stuff …

63. Epoch when modern mammals arose : EOCENE
The Eocene Epoch lasted from 56 to 34 million years ago, and is noted for the emergence of the first mammals on the planet.

71. Simon ___ : SAYS
“Simon Says” is a kids’ game. The idea is for the players of the game to obey the “controller” who gives instructions. But the players should only obey when the controller uses the words, “Simon says …”. The game has very old roots, with a Latin version that uses the words “Cicero dicit fac hoc” (Cicero says do this).

72. BlackBerry, e.g., briefly : PDA
The PDA known as a BlackBerry was given its name because the keyboard on the original device resembled the surface on the fruit of a blackberry.

2. Beijing’s river basin : HAI
The Hai River that flows through Beijing is known in Chinese as the “Hai He”, literally “Sea River”.

5. Skiing event with gates : SLALOM
“Slalom” is an anglicized version of the Norwegian word “slalam” that translates as “skiing race”. There is a longer version of the traditional slalom that is called giant slalom.

6. Dulles airport designer Saarinen : EERO
Eero Saarinen was a Finnish American architect, renowned in this country for his unique designs for public buildings such as Gateway Arch in St. Louis, Dulles International Airport Terminal, and the TWA building at JFK. The list of his lesser-known, but still impressive, works includes several buildings erected on academic campuses. For example, the Chapel and Kresge Auditorium on the MIT campus, the Emma Hartman Noyes House at Vassar College, the Law School building at the University of Chicago, and Yale’s David S. Ingalls Rink.

11. Problem with lifting? : KLEPTOMANIA
Kleptomania is the compulsion to steal, whether or not one is need of what is stolen. The term derives from the Greek “kleptein” meaning “to steal”, with the suffix “-mania”.

25. Golfer Palmer, informally : ARNIE
Arnold Palmer is one of the greats of the world of golf. Palmer is very popular with many fans of the game, and his followers are usually referred to as “Arnie’s Army”. Off the course, Palmer was an avid pilot, but is now retired from flying. He resides in Latrobe, Pennsylvania for much of the year and the local airport is named in his honor: Arnold Palmer Regional Airport.

26. Another nickname for the Ocean State : LITTLE RHODY
Rhode Island is the smallest state in the union, but is the second most densely populated. (after New Jersey). Rhode Island is known as the Ocean State, largely because about 14% of the state’s area is made up of ocean bays and inlets. Exactly how Rhode Island got its name is a little unclear. What is known is that way back in 1524, long before the Pilgrims came to New England, the Italian explorer Giovanni da Verrazzano likened an island in the area to the Island of Rhodes in the Mediterranean. There were subsequent references to “Rhode Island” in English publications, before the colonists arrived.

27. Big name in luxury bags : VUITTON
Louis Vuitton founded his fashion house in Paris in 1854. His first product was a trunk, a piece of traveling luggage.

35. Southwest Indian : UTE
The Ute is a group of Native American tribes that now resides in Utah and Colorado. The Ute were not a unified people as such, but rather a loose association of nomadic groups.

36. Virgil described its eruption in the “Aeneid” : MT ETNA
Mt. Etna is the largest of three active volcanoes in Italy. Mt Etna is about 2 1/2 times the height of its equally famous sister, Mt. Vesuvius. Etna is home to a 110-km long narrow-guage railway, and two ski resorts.

“The Aeneid” is Virgil’s epic poem that tells of the journey of Aeneas, a Trojan who traveled to Italy to become the ancestor of all Romans. “The Aeneid” begins with the words “Arma virumque cano …”, which translates as “I sing of arms and of a man …”

40. “The Metamorphosis” protagonist : SAMSA
“The Metamorphosis” is a famous novella by Franz Kafka, regarded by many as one of the greatest pieces of short fiction written in the 20th century. The story tells of the metamorphosis of Gregor Samsa into a gigantic insect. His sister, Grete Samsa, becomes his caregiver.

53. Black flower in a Dumas title : TULIP
“The Black Tulip” is an 1850 novel by the French author Alexandre Dumas. Part of the novel’s storyline is a competition in the Netherlands among the nation’s best gardeners to grow a black tulip.

59. Muscles above the abs : PECS
“Pecs” is the familiar term for the chest muscle, more correctly known as the pectoralis major muscle. “Pectus” is a the Latin word for “breast, chest”.

61. Part of DOS: Abbr. : SYS
MS-DOS (short for Microsoft Disk Operating System) was the main operating system used by IBM-compatible PCs in the eighties and for much of the nineties.

64. ___-Magnon man : CRO
Ayla is a little Cro-Magnon girl who is orphaned and then adopted by a Neanderthal tribe, as told in “The Clan of the Cave Bear”, the first of a series of novels written by Jean Auel that set in prehistoric times. I haven’t read any of Auel’s books myself, but they are on my reading to-do list as my wife recommends them. They sound interesting …

66. Nutmeg-topped drink : NOG
It’s not really clear where the term “nog” (as in “eggnog”) comes from although it might derive from the word “noggin”, which was originally a small wooden cup that was long associated with alcoholic drinks.