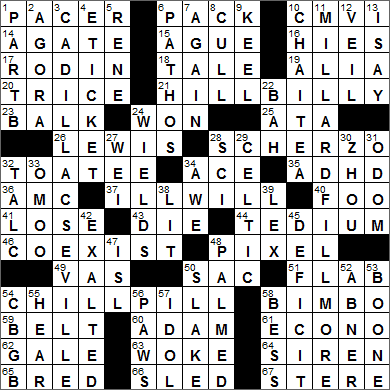 21A. Hayseed : HILLBILLY
37A. Hostility : ILL WILL
54A. What a stressed-out person may need to take : CHILL PILL
3D. Luxury wheels until 2004 : CADILLAC SEVILLE
11D. Last Whig president : MILLARD FILLMORE

Today’s Wiki-est, Amazonian Googlies
Across
1. Indiana basketball player : PACER
The Indiana Pacers are the professional basketball team based in Indianapolis, who play in the NBA. The name was chosen when the team was formed in 1967. “Pacers” is a homage harness racing pacers (famed in Indiana) and the pace car used in the Indianapolis 500.

14. Striped gemstone : AGATE
Agate is a micro-crystalline form of quartz (so is related to sand/silica). Some agate samples have deposited layers that give a striped appearance, and these are called “banded agate”.

15. Feverish fit : AGUE
An ague is a fever, one usually associated with malaria.

17. “The Kiss” sculptor : RODIN
“The Kiss” is a beautiful sculpture created in 1889 by Auguste Rodin. I’ve had the privilege of standing beside the original, life-size marble work on a few occasions as it is housed in the Rodin Museum, my favorite of all museums in Paris. The Musée Rodin is very special in that the building and garden that hold all of the works were Rodin’s actual home and studio. Well worth a visit if you make it to Paris …

18. Account from Scheherazade : TALE
Scheherazade was a Persian queen of legend, and the storyteller in the wonderful “One Thousand and One Nights”.

23. Penalized move in baseball : BALK
To balk is to stop and refuse to go on. It’s not just a baseball term …

24. Brought home the gold : WON
In the Ancient Olympic Games, the winner of an event was awarded an olive wreath. When the games were revived in 1896, the winners were originally given a silver medal and an olive branch, with runners-up receiving a bronze medal and a laurel branch. The tradition of giving gold, silver and bronze medals began at the 1904 Summer Olympic Games held in St. Louis, Missouri.

26. Comedian Black : LEWIS
Lewis Black is a standup comedian who is known for angry demeanor during his routines.

28. Musical piece whose name is Italian for “joke” : SCHERZO
A “scherzo” is often the third movement in a larger work such as a sonata or symphony. It is usually a fast, light-hearted composition, with the name “scherzo” translating from Italian as “jest”.

35. Condition for the easily distracted, for short : ADHD
The “official” name for the condition we sometimes still refer to as “attention deficit disorder” (ADD) is “attention-deficit hyperactivity disorder” (ADHD).

40. Rock’s ___ Fighters : FOO
Foo Fighters are described as an alternative rock band, one formed in 1994 by the drummer from Nirvana, Dave Grohl. The term “Foo fighters” originally applied to unidentified flying objects reported by allied airmen during WWII. Spooky …

48. Screen unit : PIXEL
A pixel is a dot, the base element that goes to make up a digital image.

59. Asteroid ___ : BELT
The vast majority of asteroids in the Solar System are found in the main asteroid belt, which is located between the orbits of Mars and Jupiter. Four large asteroids (Ceres, Vesta, Pallas and Hygiea) make up about half the mass of the asteroid belt and are 400-950 km in diameter. The total mass of the belt is just 4% of the mass of our Moon.

64. Obstacle for Odysseus : SIREN
In Greek mythology, the Sirens were seductive bird-women who lured men to their deaths with their song. When Odysseus sailed closed to the island home of the Sirens he wanted to hear their voices, but in safety. He had his men plug their ears with beeswax and then ordered them to tie him to the mast and not to free him until they were safe. On hearing their song Odysseus begged to be let loose, but the sailors just tightened his bonds and and the whole crew sailed away unharmed.

66. Transport for Calvin and Hobbes : SLED
The comic strip “Calvin and Hobbes” is still widely syndicated, but hasn’t been written since 1995. The cartoonist Bill Watterson named the character Calvin after John Calvin, the 16th century theologian. Hobbes was named for Thomas Hobbes a 17th century English political philosopher.

67. Cubic meter : STERE
“Stere” is a metric measure, although it is not part of the modern metric system. Nowadays the stere is used as a measure for firewood, and is equal to one cubic meter.

Down
1. Medicare section that covers flu shots : PART B
Medicare is divided into four parts:

2. Lead-in to phobia : AGORA-
In early Greece the “agora” was a place of assembly. Often the assemblies held there were quite formal, perhaps for the reading of a proclamation. Later in Greek history, things became less formal as the agora evolved into a market place. Our contemporary word “agoraphobia” comes from these agorae, in the sense that an agoraphobe has a fear of open spaces, a fear of “public meeting places”.

5. Artist Magritte : RENE
Belgian artist René Magritte was a surrealist. His most recognized work maybe is “The Son of Man”, a painting he created as a self-portrait. It is the work that shows a man in a bowler hat with his face covered by an apple. The image features prominently in the great movie, the 1999 remake of “The Thomas Crown Affair”.

10. Beverage often flavored with cardamom : CHAI TEA
Chai is a drink made from spiced black tea, honey and milk, with “chai” being the Hindi word for “tea”. We often called tea “a cup of char” growing up in Ireland, with “char” being our slang word for tea, derived from “chai”.

11. Last Whig president : MILLARD FILLMORE
Vice President Millard Fillmore took over the US Presidency when Zachary Taylor died after only 16 months in office. Fillmore was born in the Finger Lakes region of New York State, but grew up around Buffalo. He was one of the founders of the University of Buffalo and served as chancellor there after he left office in 1853.

29. TD Garden player : CELTIC
The Boston Celtics NBA basketball team were founded just after WWII in 1946. The Celtics won eight league championships in a row from 1958 to 1966. That’s the longest consecutive championship winning streak of any professional sports team in North America.

TD Garden is a sports arena that was built in the 1990s to replace the aging Boston Garden as home for the Boston Celtics basketball team and the Boston Bruins hockey team.

30. First premier of the People’s Republic of China : ZHOU
Zhou Enlai (also Chou En-Lai) was the first government leader of the People’s Republic of China and held the office of Premier from 1949 until he died in 1976. Zhou Enlai ran the government for Communist Party Leader Mao Zedong, often striking a more conciliatory tone with the West than that of his boss. He was instrumental, for example, in setting up President Nixon’s famous visit to China in 1972. Zhou Enlai died just a few months before Mao Zedong, with both deaths leading to unrest and a dramatic change in political direction for the country.

31. Lamar who married a Kardashian : ODOM
Lamar Odom is a basketball forward playing for the LA Clippers. Apparently Odom loves candy, and that’s how he earned his nickname, “The Candy Man”. Odom is married to Khloé Kardashian, and the couple’s wedding featured on an episode of the reality show “Keeping Up with the Kardashians”. Not a show that I have ever seen …

32. Soothing powder : TALC
Talc is a mineral, actually hydrated magnesium silicate. Talcum powder is composed of loose talc, although these days “baby powder” is also made from cornstarch.

33. Melville’s sequel to “Typee” : OMOO
Herman Melville mined his own experiences when writing his novels. Melville sailed from New Bedford, Massachusetts in 1841 on a whaler heading into the Pacific Ocean (a source for “Moby Dick”). Melville ended up deserting his ship 18 months later and lived with natives on a South Pacific Island for three weeks (a source for “Typee”). He picked up another whaler and headed for Hawaii, where he joined the crew of a US navy frigate that was bound for Boston (a source for “Omoo”).

42. Grand ___ Ruler (Elks pooh-bah) : EXALTED
The Benevolent and Protective Order of Elks (BPOE) was founded in 1868, and is a social club that has about a million members today. It started out as a group of men getting together in a “club” in order to get around the legal opening hours of taverns in New York City. The club took on a new role as it started to look out for poor families of members who passed away. The club now accepts African Americans as members (since the seventies) and women (since the nineties), but atheists still aren’t welcome.

50. Satisfy, as thirst : SLAKE
“To slake” is to satisfy a craving, as in slaking one’s thirst.

52. Civil War general Doubleday : ABNER
Abner Doubleday was a general in the Union Army during the Civil War. Some say that Doubleday fired the first shot in defense of Fort Sumter in the first battle of the war. After the Civil War, while stationed in San Francisco, Doubleday too out a patent for the cable car system that still runs in the city. Claims have been made that Doubleday also invented baseball, with the first game being played in Elihu Phinney’s cow pasture in Cooperstown, New York.

53. Pat who co-starred in “Journey to the Center of the Earth” : BOONE
The singer Pat Boone was second only to Elvis Presley in record sales in the late fifties. Boone also penned a number-1 bestselling book in the fifties called “”Twixt Twelve and Twenty” that offered advice to teenagers.

58. Gershwin title heroine : BESS
“Porgy and Bess” is an opera with music by George Gershwin, lyrics by Ira Gershwin, and libretto by DuBose Heyward. The storyline of the opera is based on the novel “Porgy” written by DuBose Heyward and and wife Dorothy. “Porgy and Bess” was first performed in 1935, in New York City, but really wasn’t accepted as legitimate opera until 1976 after a landmark production by the Houston Grand Opera. The most famous song from the piece is probably the wonderful aria “Summertime”.